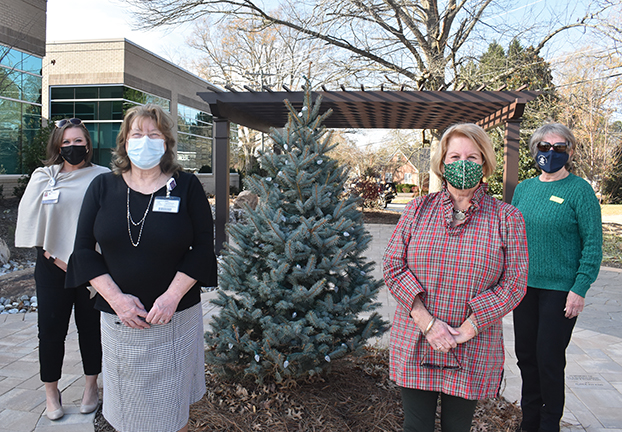 SALISBURY — In a year where donors have every excuse not to give, Carole Simmons said that the generosity to support the Novant Health Rowan Medical Center Auxiliary’s Tree of Hope project has been overwhelming.

“People would certainly have a reason this year to pass, but they’ve been great this year,” said Simmons, the co-chair of the Tree of Hope project. “I’ve been surprised at people’s generosity.”

Even though a ceremony wasn’t held this year, the auxiliary still lit the Tree of Hope in a courtyard at the medical center at 5 p.m. on the first Thursday in December. It was the 47th consecutive year that the Tree of Hope has been lit.

Typically, the lighting of the tree brings out dozens of people and features live entertainment from local artists. While that didn’t happen this year due to COVID-19, the Tree of Hope has received a substantial amount of donations thus far.

When someone donates to the Tree of Hope, a symbolic light is placed in honor of whoever they choose to memorialize. The names of those honored will also appear in the Salisbury Post and a card will be sent to each honoree. A light on the tree is only a $10 donation, but Simmons said that there are many who donate more to honor several people with lights.

To date, the hospital’s auxiliary has received $7,450 in donations from 135 donors. Those donations will be made in honor of frontline medical workers and will go to fund projects in various hospital departments that will assist with patient needs, such as implementing more seating in waiting areas.

“This year, we decided that since we have all of these people staying to work,” said Nancy Linn, president of the auxiliary and co-chair of Tree of Hope. “We want to thank the frontline healthcare workers who are working during the pandemic.”

In addition to the tree in the courtyard at the medical center, the auxiliary also lit a tree donated by Godley’s Garden Center in the courtyard of the new Wallace Cancer Institute. For the past several years, the money raised from the Tree of Hope supported the building of the cancer care center. 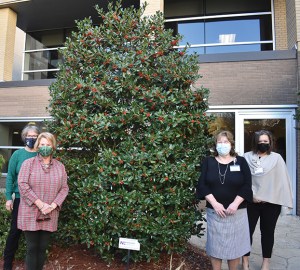 Carole Simmons, Nancy Linn, Sandy Morrison and Kristen Trexler stand around one of two trees that are involved in the hospital auxiliary’s Tree of Hope fundraiser. Ben Stansell/Salisbury Post

Linn and Simmons began preparing for this year’s Tree of Hope in October and have spent hundreds of hours to ensure that the fundraising campaign goes out without a hitch. In a tumultuous year, that extra planning has been critical, Linn said.

The coronavirus isn’t the only hurdle that Linn and Simmons have had to adjust to. Instead of sending out donation request letters in October, Linn said that they waited until the election was over so that the letters wouldn’t be lost in the influx of election mail.

Despite those challenges, Linn said that it has been a “banner year” so far for the Tree of Hope.

Kristen Trexler, development manager at the Novant Health Foundation, said that the foundation was grateful for the auxiliary for once again hosting the Tree of Hope.

“The auxiliary is an instrumental part of the success of this hospital. We couldn’t do what we do on a daily basis without them,” Trexler said.

The auxiliary raises money throughout the year for the hospital, including through its gift shops in the medical center and Wallace Cancer Institute. Sandy Morrison is the gift shop manager and is “the glue of our organization,” according to Simmons. Linn said that the Tree of Hope’s success wouldn’t have been possible with Jill Rabon, guest services manager for Novant Health.

The auxiliary will be accepting donations for the Tree of Hope until Dec. 31. For more information, contact the gift shop at 704-210-5205. Checks can be mailed to the Novant Health Rowan Medical Center Auxiliary at 325 Topsail Road, Salisbury, NC, 28146.