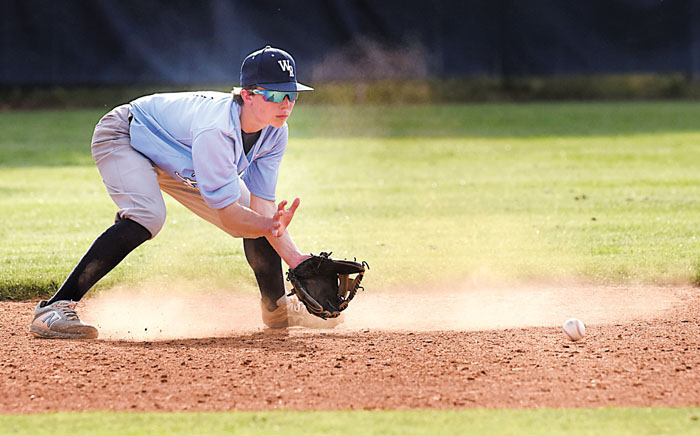 West's Steven Smith fields a ground ball during a game against East Rowan in 2019. Photo by Wayne Hinshaw, for the Salisbury Post

MOUNT ULLA — West Rowan senior Steven Smith is wound tight, but he’s 5-foot-9, 150 pounds, so the shortstop/pitcher is never the first guy to get noticed.

That’s why Caldwell Community College was able to get a commitment from Smith recently.

“When Steven gets off the bus, he’s not one of those physically imposing players who is going to stand out,” said Davie County coach Bradley Rudisill, who coached Smith in fall showcase tournaments. “But after you’ve seen him play three or four games, you realize that he’s as competitive as anyone. And he doesn’t care who he’s playing against.”

Smith showed that in early October when Rudisill’s Showtime Blue Jays, a travel team made up of lightly recruited Rowan and Davie guys, won a tournament game against the South Charlotte Panthers at First National Bank Field in Greensboro, where the minor league Grasshoppers play.

The Blue Jays won, 2-1. Mostly, Smith won it. He launched a two-run homer over the left-field fence. Then he took the mound and closed the game.

“The South Charlotte Panthers are loaded, Division I kids all over the field,” he said. “But Steven Smith is going to compete in the field, on the mound and in the batter’s box. A lot of college coaches asked me about Steven and most of them wanted to know why more people weren’t recruiting him. Well, COVID put a wrench in things for a whole lot of the kids in the Class of 2021. He’s one of them.”

But there’s no doubt Smith’s best baseball is still ahead of him. He has a chance to be a two-way player at Caldwell which is located in the town of Hudson, about 12 miles and 20 minutes northwest of Hickory.

“Caldwell is looking at Steven as a two-way,” Rudisill said. “He has a ton of power at the plate for his size and he makes every play a shortstop needs to make. He reminds me a lot of Anthony Azar, a player I coached at Davie. They’re both really good shortstops and really good pitchers. Anthony is a two-way player now at Mars Hill.”

Smith started playing ball when he was 4. He remembers pitching for the first time when he was 10.

“I’ve had a lot of good coaches, but my mom (Jennifer) has been as important as anyone as far as my baseball career,” Smith said. “She’s always pushed me. She’s always found teams for me to play for.”

Smith has a great arm, outstanding, close to astounding arm strength for his size. He said he’s hit 88 on the radar gun. His coaches say he can work consistently in the 83 to 85 range.

He made a name for himself when he hit .329 as varsity shortstop as a West sophomore in the spring of 2019, but he hasn’t pitched in high school because the Falcons have had plenty of mound options, guys like Daniel Durham, who is now at Catawba, Casey Gouge, Payne Stolsworth and Cullen Davis.

“I’ve thrown bullpens at West and when I was with Rowan County Legion (in the summer of 2019), but that’s about it,” Smith said.

That lack of mound experience would have changed in 2020, but then COVID-19 short-circuited a promising West season. Coach Seth Graham says the Falcons were headed for good things, and Smith would’ve been a huge part of it. West was 4-1 after five games.

“Steven has come a long way in the past year, mentally and physically,” Graham said. “He would have pitched some for us as a junior if we’d had our season. We are counting on him to pitch a lot this spring and he’ll also be one of our better hitters and our shortstop. The game has slowed down for him quite a bit in the past year. He’s getting better reads on groundballs and now he’s come up with a breaking ball with a very high spin rate. He gets a lot of bad swings from hitters. He throws hard. He has electric stuff.”

Smith didn’t mess around when he pitched for the Showtime Blue Jayes. He stuck with fastballs.

“He attacked hitters with a mid-80s fastball,” Rudisill said. “He’s someone who hasn’t thrown a lot of innings, but I can see him being a combination infielder and closer in college ball.”

While the 2020 high school season was brief (Smith was 4-for-15 with four RBIs as the Falcons’ cleanup hitter), he didn’t let that setback stop him. He played summer showcase ball with the Canes program. Then he played in the local high school fall league as well as with the Showtime Blue Jays.

“Even after COVID, I still got to play about 50 games,” Smith said. “I tried to bring energy to every one of them. My favorite major league player is (Atlanta Braves outfielder) Ronald Acuna because he brings energy.”

Smith had several offers from Division II and Division III schools, but he still has the dream of playing D-I ball after two years at Caldwell. As long as he stays healthy, he should have a future at a four-year school.

“It’s good to have options, and Steven has them,” Graham said. “If pitching doesn’t work out, he can be a good infielder. If hitting doesn’t work out, pitching might. There’s also a chance he’s going to grow some more. He’s grown some (about 2 inches) in the past year and his dad is a tall man.”

Smith was still undecided about his future when he went to visit Caldwell after getting a call from head coach Frank Pait, the former Lenoir-Rhyne coach.

“As soon as I got to Caldwell, I knew that this was it,” Smith said. “I liked everything about it.”

“Junior college baseball is no joke, and that’s a good league Caldwell is playing in,” Graham said. “It’s going to be a very competitive baseball environment that Steven will thrive in. I expect him to do really well.”

But first there’s a condensed senior high school season to play (April 26 to June 11). Maybe this is the year everyone notices Smith.

After that, Smith plans to make a comeback with Rowan Legion ball. He batted .267 with 14 RBIs in 75 at-bats for Rowan, following his sophomore year at West.

The Rowan Legion team won’t be playing at Newman Park this summer, due to planned renovations, but coach Jim Gantt says the team will find a place to play.