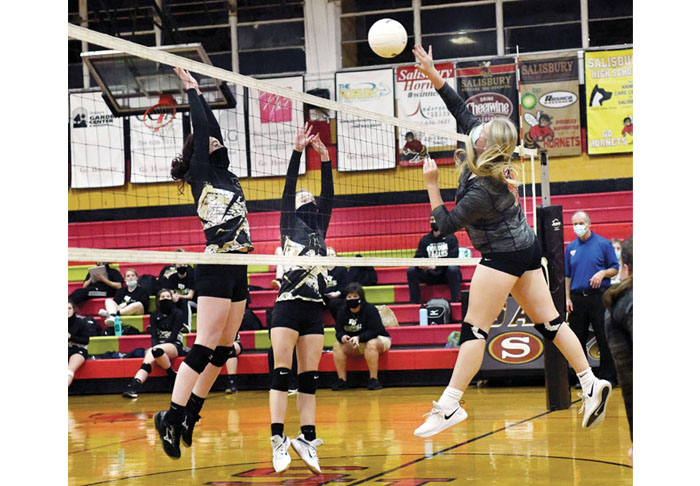 Salisbury's Brooke Cunningham 15 on the right and E Davidson's Josie Baxley 5 and Emma Anderson 4., photo by Wayne Hinshaw, for the Salisbury Post

SALISBURY — East Davidson jumped a little higher, moved a little quicker and had the only dominant player on the floor, but Senior Night adrenaline creates special moments.

Salisbury’s volleyball team appeared to be doomed several times on Monday, but the Hornets just wouldn’t go away and were able to overcome East Davidson’s talented sophomore 6-footer Lyndsay Reid.

It was only their second win in a COVID-shortened season, but it’s one they’ll remember — especially seniors Alli Tuck, Ellen Yang and Massa Sirleaf.

Tuck (10 kills and four blocks) and Yang (26 assists, 18 digs, 5 kills, 5 aces) were the standouts for the Hornets. Sirleaf didn’t play much, but she had an early kill that helped energize her teammates.

“We’ve had several close matches similar to this, but we weren’t able to win them,” SHS coach Andrea Davis said. “But this was Senior Night, and everyone really took that to heart. There was a feeling of getting this one for the seniors.”

Salisbury experienced rough patches. It looked like the Hornets had the first set wrapped up — leading 24-18 — but they couldn’t finish it off. East Davidson stopped making mistakes and missing serves and played flawlessly for a long stretch. When the Golden Eagles (3-6, 2-5) finally outlasted the Hornets, 31-29, it seemed unlikely Salisbury could come back from that disaster, but they did come back.

“I knew it was going to be one of my last games, so I wanted to do all I could,” said Tuck, the Hornets’ middle blocker. “Everyone had that feeling of pulling together and somehow making it work. Losing that first set hurt, but we didn’t stop pushing.”

Tuck was playing on a bad ankle. Mallory Link, an outside hitter, had a finger smashed by one of Reid’s early kills. But neither girl was looking for a trainer.

The second set was a struggle from the start. At 18-all, the Hornets finally pulled away after a spree at the net by Brooke Cunningham (6 kills), and it was 1-1.

The third set was the pivotal one. East Davidson started briskly, with Reid hammering down one kill after another. The Hornets were being buried 13-5 when Davis called timeout.

“One of the things we’ve talked about is that you can play three or four really bad points in a row, but that doesn’t stop you from playing the next three or four points really well,” Davis said. “As bad as it looked, the girls never game up on themselves. We turned it around. I was extremely happy about that.”

Out of that timeout, the Hornets scored five straight points and were back in it. Yang and Tuck were really good the rest of the set, and the Hornets took it. After the timeout, they flattened the Golden Eagles 20-6.

The key adjustment was a constant double block by Tuck and Link (6 kills, 2 blocks) against Reid. The Hornets weren’t getting hurt anywhere else. Tuck and Link got a few blocks and tips, but mostly they forced Reid to work harder and think more, to hit over or around them. She was no longer getting routine kills. She smacked a few balls out.

“That No. 14 (Reid) is really good,” Tuck said. “She’s a very aggressive hitter, more aggressive than anyone we have. But we made an adjustment and we got pumped up and about trying to slow her down.”

Yang is a strong server, and the Hornets jumped out quickly on her serve in the fourth and final set. The Hornets were up by as many as four points, but East Davidson scrapped back to 15-all, forcing the Hornets to use a timeout.

With the Hornets leading 21-19, Tuck got the night’s key kill on a reaction play at the net. She got a fist up as she moved right to left at the net and what looked like a certain East Davidson point turned into a point for Salisbury. Instead of 21-20, it was 22-19, and the Hornets were on their way. Fittingly, Yang, Salisbury’s primary setter, found  a hole in the East Davidson defense for match point.

Salisbury got a lot from a lot of people. Riley Peltz had three aces, seven kills and 15 digs. Libero Mady Lawrence had 26 digs. Ella Trainor had 22 digs, while Grace Blackwell contributed 14.