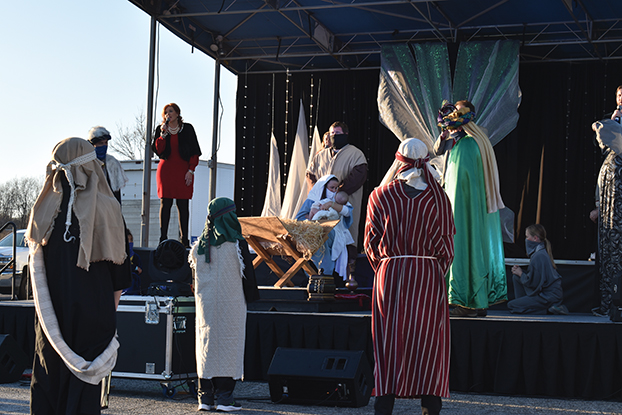 Instead of hosting its annual Christmas music celebration in its downtown sanctuary this year, First Baptist Church put on a show in the West End Plaza parking lot. Ben Stansell/Salisbury Post

SALISBURY — Only a few hours before the show was set to go on, the performers of  First Baptist Church’s “The Sounds of Christmas” music celebration came together to rehearse for the first time on Saturday afternoon.

“I’m used to having a more controlled environment,” said Russ Robbins, the church’s pastor of worship and music and the director of the performance. “I know what it’s like at the church, but this was a bit unfamiliar.”

The last-minute rehearsal was one of many differences in this year’s edition of the church’s annual musical performance. Instead of having its service in its downtown Salisbury sanctuary like it has for the past 28 years, First Baptist decided to perform a drive-in version of the show in the West End Plaza parking lot. 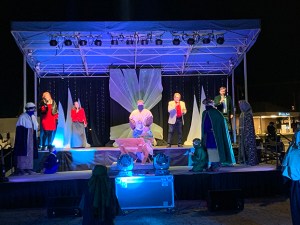 And rather than hold seven performances, the church hosted just three this weekend, one on Saturday night and two on Sunday at 4 p.m. and 7 p.m.

Despite an altered rehearsal schedule and a change in venue, Robbins said that he was happy with how everything came together.

“We have received so many comments that they’re just so appreciative that we’ve done something like this while everything else is just shutting down. We wanted to do something safe and keep people in their car and everybody has just been open and receptive to it and thankful.”

For all three performances, the West End Plaza parking lot filled with hundreds of cars. Most attendees listened to the performance over their radios and watched the stage through their windshields while others took in the show tailgate-style from their truck beds.

Normally, First Baptist’s Christmas music service is centered around the church’s 90-person choir who combines to form a “living” Christmas tree and sings traditional Christmas songs and hymns. When Robbins realized that COVID-19 would prevent the church from hosting its normal performance, he pivoted to a drive-in version and decided that they would rely on a much smaller ensemble who would mainly perform solos and duets. 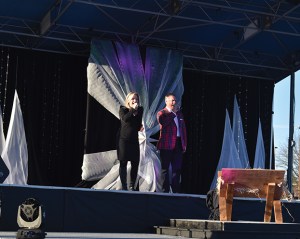 Performers rehearsed their songs by themselves or with a partner for weeks leading up to the show, but didn’t get to sing together as a whole until Saturday.

Andrea Brown, who has sung in First Baptist’s musical services for three years, said that the new format took some getting used to.

Although this year’s performance featured fewer singers, it required a great deal of coordination between the lighting and sound crews.

“There was one group doing the stage and sound, another group doing the lightning and another doing the video, it took a bunch,” Robbins said. “Everything worked smoothly thanks to all the tech guys that helped us out.”

Specialized Sound and Light, Venue Services, Miller Davis Inc. and Virtual Sounds all meshed to bring the show together, Robbins said. The crews started setting up in the West End Plaza parking lot at 7:30 a.m. Saturday and had everything ready to go for the first and only afternoon rehearsal. 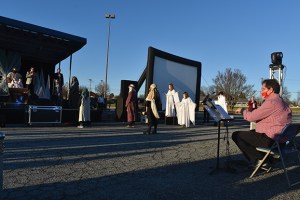 The show featured musical performances and a re-telling of the story of Christ. Katie Bogle and David Whisenant provided narration for the event. First Baptist Associate Pastor Brian Farmer delivered a short message.

Another major factor in the show going on was something that Robbins had no control over: the weather.

“At the beginning of the week, it was forecasted to be really cold and rainy,” Robbins said. “The closer we got to it, that rain just kept moving later and later until it wasn’t here. We’re grateful for that.”

First Baptist collected cans of food for Rowan Helping Ministries and also pledged to donate $5 to a local charity for each attendance card that was submitted.