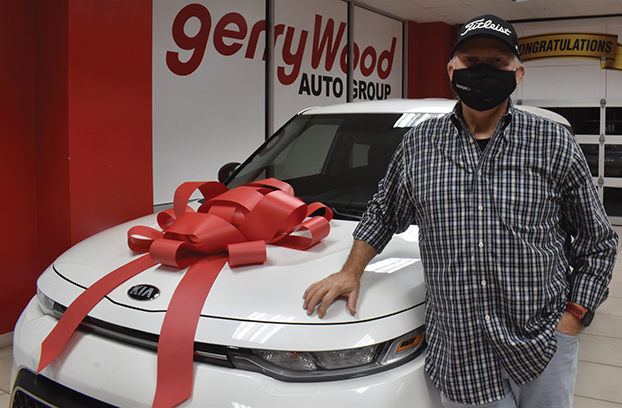 David Cromley, a sales director for Innospec, stands next to the car he won from donating to the Rowan County United Way's 2020 fundraising campaign. Ben Stansell/Salisbury Post

SALISBURY — David Cromley’s flight into the Charlotte Douglas International Airport on Friday night was one he won’t soon forget.

Not only was the flight devoid of passengers, but he was flying into North Carolina to pick up a brand new car from Gerry Wood Kia.

Cromley was announced as the winner of the Rowan County United Way’s car giveaway at the 2020 campaign celebration in November. Except, he wasn’t there in-person to hear his name called as the recipient of a free car. He watched via FaceTime from a phone held up by a coworker as he sat in his home in Illinois.

Even though Cromley, a sales director for Innospec in Salisbury, has never lived in Rowan County, he gives every year to the local United Way’s campaign. The campaign helps United Way raise money that it distributes to 19 community impact partners. This year, the campaign raised more than $1.2 million.

Cromley typically visits Salisbury several times a year, he said, but hadn’t visited in 2020 due to the pandemic. When he visited on Friday to drive away in his new car, he didn’t stay long. After being picked up from the airport by a representative from the dealership, Cromley signed the paperwork for a 2021 Kia Soul and started the 12-hour trek back to Illinois. He broke up the driving into a two-day portion, hitting the road for about four hours on Friday night and finishing the rest on Saturday.

If conditions were different, he said that he would’ve stopped in to see some friends.

Cromley said that the car buying process, conducted via a series of phone calls, was smooth. A father of six children, it wasn’t the first time Cromley had dealt with getting a new car. Cromley picked out a 2021 Kia Soul, which he said will allow him to diversify his family’s current garage.

“Basically I have a huge pickup and my wife has a Jeep Grand Cherokee and they both have big V8s and I still like having room,” Cromley said. “This looked like, for the price range, the best choice.”

Brad Wood, the dealer in principle for Gerry Wood Automotive Group, said that this is the second time his dealership group has given away a free car as part of the United Way campaign.

“We’ve been a part of the car giveaway with the United Way since the beginning, as have all the franchise dealers in the town,” Wood said. “We believe that it is absolutely vital to helping raise donation amounts. The chance to win a new car is exciting and perhaps if you get an extra ticket or two, perhaps people will donate a smidge more.”

Each year, the name of one of four dealerships is drawn from a lottery to see who will give away the value of a $16,200 car credit. Gerry Wood Automotive Group, Cloninger, Team Automotive Group and Ben Mynatt Nissan are the four participants.