Treme moves on from interim role in Spencer 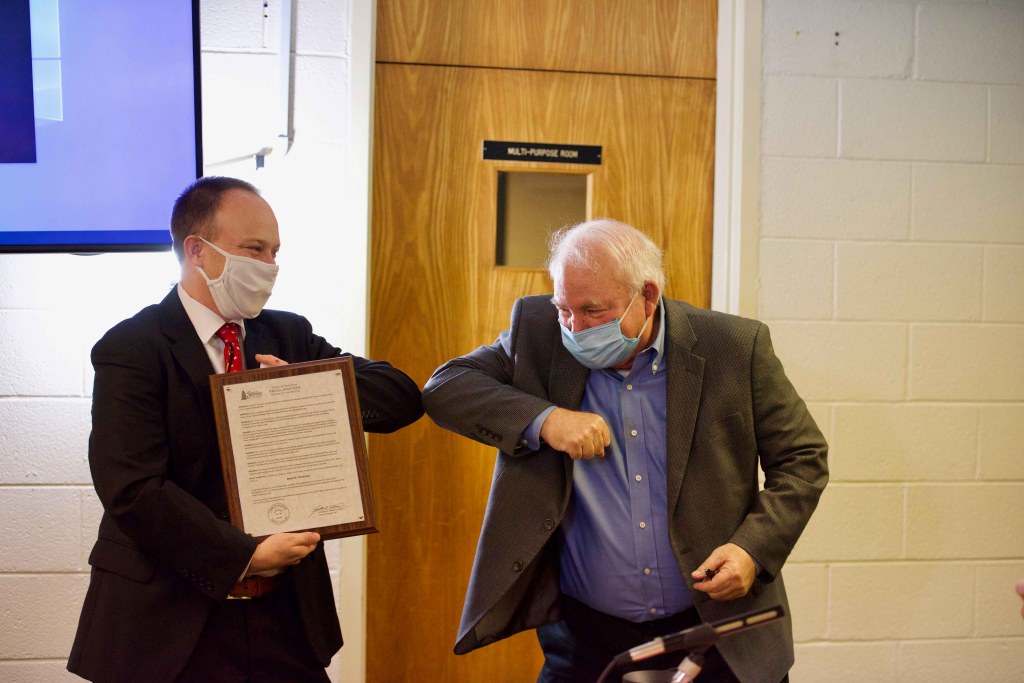 Carl Blankenship/Salisbury Post - Spencer Mayor Jonathan Williams pausing for an elbow bump with Interim Town Manager Dave Treme on Tuesday. Williams was recognizing Treme for his service. Treme was the long-time city manager of Salisbury and can not seem to stay retired. Treme's last day with Spencer Dec. 18.

SPENCER — This is not Dave Treme’s retirement.

Treme is best known for his longtime service as Salisbury’s city manager. He also served as manager in Mooresville, but Spencer added Treme to its annals on Tuesday, when Mayor Jonathan Williams proclaimed this coming Friday “David W. Treme Day.” It’s scheduled to be his last day as interim town manager — a title he’s held for a year and a half.

“I’m sorry for the mark I’ve made on the town,” Treme joked.

Williams cautioned Treme he was not finished yet, also announcing the establishment of a fund named for Treme to further staff education.

During Treme’s tenure, Spencer has picked up a few major grants and calmed what had been a contentious state of town government. Spencer is also nearing the start of work on its long-delayed Park Plaza project.

Treme said he came to Salisbury expecting to stay for a few years before moving on to his next job. More than 25 years later and still Salisbury’s city manager, he retired in 2011. He eventually found himself working with other towns before landing as Mooresville’s town manager for a few years. Eventually he was asked to take the reins in Spencer.

After his 2011 retirement, Treme said he felt a bit unfulfilled after a few years. He started working for Mooresville, overseeing things like building maintenance, parks and recreation and the library. The better part of a year later, he finished there and later received a call from Troutman, which needed an interim manager.

Treme spent five months there and then received a call from Moorseville asking if he would like to serve as interim manager. He was later offered the full-time job and came out of the retirement that wasn’t.

Treme’s longtime friend and colleague Joe Morris, who also retired from Salisbury and was later hired as town interim planner for Spencer, said Treme keeps getting requests to work for towns because things seem to get better when he’s at the helm.

People who have worked with him agree: Treme sets goals, makes plans to reach them and accomplishes them.

Part of the goals he makes are for other people. Several people he hired or worked under him went on to further their educations or go places with their careers they did not expect under his guidance.

Morris is one of them. The two met 1986 when Treme started in Salisbury. Morris was a public works employee and horticulturist, but Treme saw potential in him on the planning side and guided him to pursue a planning degree.

Morris was one of several people who Treme pushed along while he was at Salisbury. Treme’s friend and former Salisbury clerk Myra Heard went to college under Treme’s direction. Current City Clerk Kelly Baker went to school and rose into her position under Treme’s guidance as well.

Morris said Treme occasionally sought talent to hire into positions, but usually he was more concerned with helping people already working for the city reach their full potential.

Everyone, including Treme, agrees he emphasizes setting goals and creating plans to achieve them. Morris described Treme’s time with Salisbury as a high point for the city.

“I know that he practiced that personally and professionally,” Baker said, recounting that Treme would help his daughter plan for her future that way as well.

Treme is not sure if Spencer will be his last stop in municipal management. He considers town administration his calling. Being of use to communities is something he is passionate about. So, in typical fashion, Treme says he’ll pray about any requests he receives and make a decision then.

Treme said he has always received calls and prayerfully considered them. He has not accepted every job he has been offered either.

Faith is a major part of Treme’s life. He tries, and often succeeds, at reading the Bible cover-to-cover every year. He is not sure the number of times he has read the text, but he knows it’s a lot.

Baker said Treme’s faith is something that sticks out about him and something he shares.

Among his repertoire were “Tremeisms.” Heard’s favorite Dave Treme saying was Proverbs 29:18: “Where there is no vision, the people perish.”

After Treme re-retired from Moorseville, he told his wife he thought he would be hired as an interim in Spencer. She asked him if he had let the town know he was interested or sent them a resumé. He had not.

“I said, ‘I just have a feeling I am going to end up there,'” Treme recalled.

Sure enough, Treme received a call from former Spencer Mayor Jim Gobbel asking for help with the town’s budget. Treme had to not work with a municipality for 30 days after leaving Mooresville, and directed Gobbel to John Sofley, who was an administrator under Treme at Salisbury and a recent retiree himself.

Sofley was brought on board as budget officer. Gobbel later asked Treme to come in and interview for the interim position.

Treme told the board he was available and only a seven-minute drive away.

The next day, Treme found out he would be appointed manager by word of mouth before he heard from the town

Outside of his work with municipalities, Treme enjoys his family, golf and Koco Java. Before the COVID-19 pandemic complicated public life for the entire country, he could be found at the local coffee shop a few mornings each week talking to the eclectic group of friends he’s made there.

Peter Franzese will take over as Town Manager on Jan. 1 pending approval of a contract on Tuesday. The town will hold a drive-thru farewell for Treme at Park Plaza at 3 p.m. on Friday.