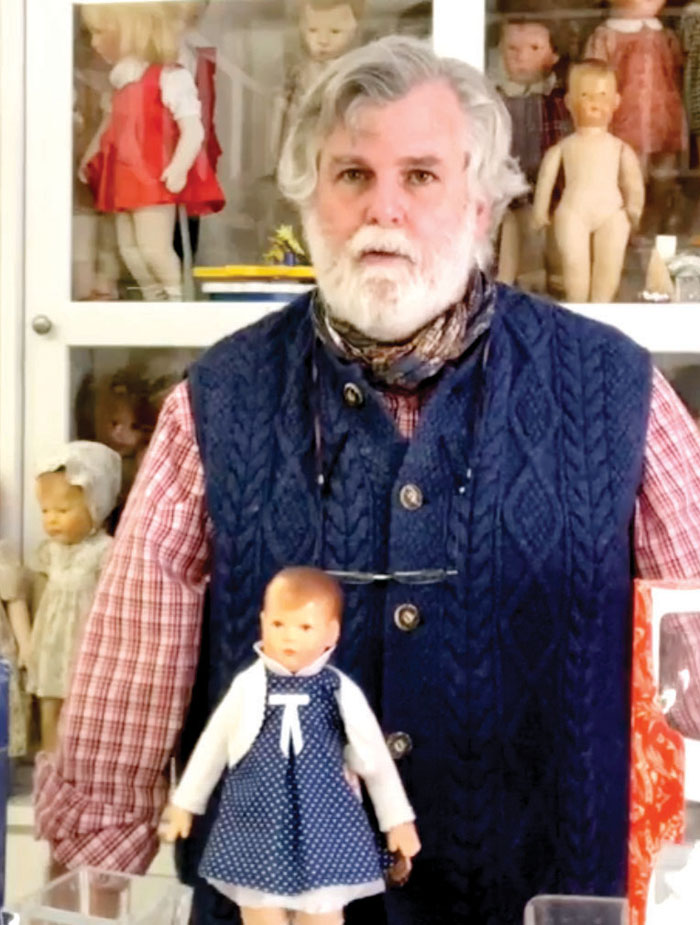 SPENCER — Nearly 70 people from all over the U.S., Germany and England joined together over Zoom to attend a “virtual doll” event. This group of doll enthusiasts wasn’t deterred because they couldn’t get together in person.

Jonathan Green, an internationally known doll educator and dealer, organized a weekend of activities which included educational lectures, show and tell, a baking demo and an apron workshop.

Green is no stranger to creative teaching. In fact, he is a professional educator in New Hampshire. He has been fascinated with antique dolls since childhood and has been studying, collecting and dealing in them for almost half a century.

His expertise includes Käthe Kruse dolls. In the early 1900s, German born Käthe Kruse, began her career out of necessity. Her husband, Max Kruse, was a sculptor and refused to buy commercially made dolls for their children. Kathe, ever the clever housewife, began to make cloth dolls for their children. Thus, she became a businesswoman who created a doll empire in a male-dominated world.

Joining the event from Bonn, Germany, was renowned author Thomas Dahl, who specializes in antique Käthe Kruse dolls. He is the author of the well known Kathe Kruse price guide “Käthe Kruse Puppen. Katalog und Preisführer.” With over 30 years of experience, he advises collectors and even museums like the Kathe Kruse Museum in Donauwörth, Germany and the Bad Kösen Museum, also located in Germany.

Fundraising for nonprofit organizations has certainly been challenging this year. With this in mind, Green decided to raffle off a one-of-a-kind replica Käthe Kruse Doll VII from the late 1920s. All proceeds benefited the N.C. Museum of Dolls, Toys & Miniatures in Spencer.

The doll has a hand-painted vinyl head and a reindeer-hair-stuffed body with applied thumbs. The doll brought nearly $1,000 from the raffle proceeds.

Even though Käthe Kruse died in 1968, children and adult collectors across the world still cherish her distinctive — and sought-after Käthe Kruse dolls. Today, the dolls are still made at the Käthe Kruse Manufactory in Donauwörth, Germany.

If you want to learn more about Kathe Kruse dolls, go to jonathangreenco.com or contact the N.C. Museum of Dolls, Toys & Miniatures at info@NCMDTM.com .