GREENSBORO — The people around Tony Watlington have always known he was going places.

That includes Jimmi Williams, executive director of Communities in Schools of Greater Greensboro, who suspected Watlington would be a superintendent some day. Williams took on the executive director role in 1994, the same year Watlington started as a history teacher in Guilford County Schools. Four years later, Watlington was named district teacher of the year.

“He was, even then, a favorite of our program at Dudley High School,” Williams said.

Watlington has spent his entire education career with with Guilford County Schools, but that is set to change for the first time early next year when he takes over as superintendent of Rowan-Salisbury Schools.

While suspecting that Watlington would eventually rise to the top rank, Williams said he hoped the incoming RSS superintendent would stay at the school level because of his qualities as a teacher and principal. Williams says Watlington has maintained a common touch, staying approachable and down-to-earth.

“He was extraordinary,” Williams said. “I always hoped that he would stay closer to the kids in the classroom, at least as a principal at a school. But I have always known in the back of my mind that his trajectory was probably a whole lot wider than that.”

For his part, Watlington has tried to stay close to the classroom. He visits schools constantly and keeps his teaching license up to date. He plans to begin visiting every school in the district when he starts as superintendent.

“He was a magnificent teacher. I mean people raved about Tony,” Williams said.

Watlington said he got into education because he believes it’s the way for kids who come from challenging circumstances are able to have a chance in this country.

“It gives kids opportunity to really improve their life chances,” he said. 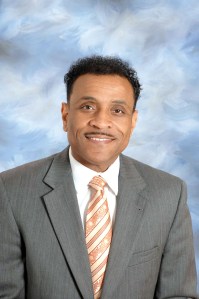 For just a little while longer, Watlington is chief of schools for Guilford County Schools, a position in the superintendent’s cabinet that he’s held for the previous three years. He’s also held other administrative roles within Guilford County Schools, including chief strategic planning officer, central region superintendent, executive director of the central region and executive director for school support.

A couple of middle school teachers, Watlington recalled, took a special interest in him and produced a spark that prompted him to eventually pursue teaching in college.

Watlington said he’s enjoyed working with young people. He found the most joy in building relationships with students, setting high expectations for them and partnering with families to make a difference. He’ll bring a unique perspective to the superintendent job, having also worked as a bus driver and custodian.

When Guilford County Schools Superintendent Sharon Contreras met Watlington, he was one of four regional superintendents. At the time, he was running a sub-district of about 30 schools. He was later named to chief of schools under Contreras.

“I realized early on that Dr. Watlington had a really good relationship with the principals,” Contreras said.

Contreras said Watlington was respected because he knew principals after rising through the ranks. He was known as a former principal the community revered. She knew immediately Watlington had knowledge, skills and history that would be valuable as she was coming into the district.

Contreras said she’s found him to be extraordinarily calm, even when she could tell he was not happy with a situation. She said Watlington is a kind person who cares deeply about the children and their families as well. She expects the Rowan-Salisbury Board of Education to enjoy working with him and come to respect him quickly.

“I can’t say enough about what you’re getting in that community and what a loss it is to Guilford County,” Contreras said.

For all 15 years he’s worked for the district, Erik Naglee, principal at Page High School, has known Watlington, but Naglee says he’s come to know him better after moving from a teacher into administrative roles.

“He’s someone you can always count on, someone that you can call,” Naglee said. “Even though I have a direct supervisor, we’ve always had an open dialogue about what support I’ve needed.”

Naglee said Watlington has always been able to give credible advice because he’s someone who has been at all levels in a school.

As for what he’s planning, Watlington said the country has 50 years of research on what works to improve education. The incoming superintendent says he believes in providing professional learning for staff to implement that research in schools.

“At the end of the day, we want students to participate in mastery learning,” Watlington said.

RSS is developing a system of short assessments intended to determine a student’s mastery of concepts as part of its ongoing effort to implement competency-based education. Retiring Superintendent Dr. Lynn Moody is openly against the standardized testing that has been the norm for the past few decades.

“I think that we need to take a look at standardized testing,” Watlington said. “In North Carolina I think we do too much testing. I think the key is we have to have ways to assess what students know and are able to do.”

Watlington said he is for assessing students, but not for going overboard with tests that are inappropriate or do not give meaningful data. Watlington said a good assessment will tell the district what needs to be worked on next for each student so they can grow.

Watlington said the district also has a respected superintendent in Moody, a strong leadership team and is trying to figure out how to take its success to a higher level.

Watlington said it is one thing to read about a district and study data, but a superintendent needs to spend some time hearing the points of view of everyone in the district. He intends to develop a new strategic plan for the district in the next year, bring his research knowledge to improve achievement and look at outcomes with a fresh set of eyes.

Watlington said a strategic plan is a way as a school community to ask what the district should look like in five or 10 years down the road, then back up and ask “how do we get there?”

“If RSS is successful with renewal, I believe that this could be the district in North Carolina that shows every other school district in the state and the country how to improve achievement for every group of students and how to close the achievement gap between student groups,” Watlington said.