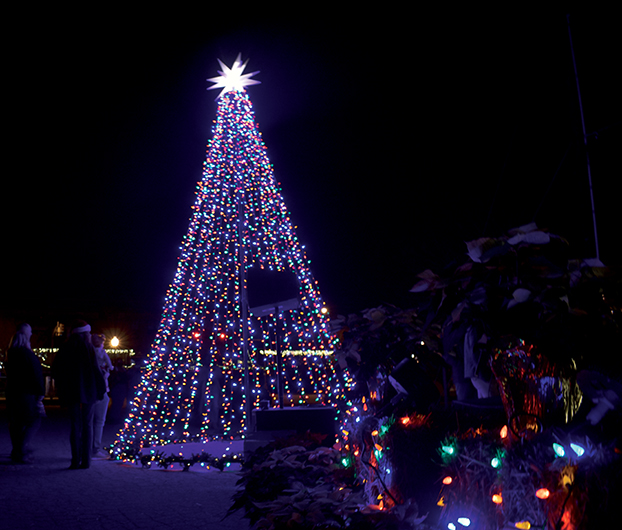 SPENCER — A Christmas tree illuminated the Park Plaza parking lot in downtown Saturday night, ringing in the holiday season and serving as the crescendo of the first ever Hometown Holiday Drive-In.

“It met and exceeded our expectations,” said Spencer Mayor Jonathan Williams. “We had a great turnout, the music was fantastic and it was great to be able to have our community out and spend time celebrating.”

The Christmas event was organized by the nonprofit Spencer Hometown Holidays in conjunction with the town of Spencer. Spencer Alderman and event coordinator Sam Morgan said he was more than happy with how the night turned out after months of planning.

“Back in the summer, we wanted to have something special just for the residents of Spencer,” Morgan said. “At that time, they were still thinking about having a Christmas parade, so we wanted to do something in addition and we thought about a tree lighting service, which had been done years before.”

Morgan said organizers considered allowing people to set up lawn chairs to listen to music and watch the tree lighting, but as COVID-19 numbers continued to rise, they decided that it would be best for people to remain in their cars.

Around 6 p.m. on Saturday evening, the first cars began pulling into the parking lot. At first, Morgan said he was nervous about turnout for the event, but the parking lot soon filled with people. Several decorated golf carts parked to watch.

Pam Pinnix hustled back and forth from car windows to Roger Dogs, the hot dog restaurant she owns with her husband Roger that sits just across the street from Park Plaza. Roger Dogs was one of several downtown Spencer restaurants that participated in the event, along with Belly’s Soul Food Diner and Pinnochio’s.

Event attendees could order from the restaurants and have food delivered directly to their cars.

“It’s exciting that they’re doing things to get people out,” Pam said. “They’re trying to help the small business owners in this town since the tree lighting was for the town.”

Pam and Roger stayed busy throughout the night until the tree was lit and the cars finally went home.

Although Morgan said that event planners originally thought about bringing food trucks in, they decided to encourage people to support downtown businesses instead.

A little before 7 p.m., Santa Claus arrived at Park Plaza riding a fire truck. The truck drove through downtown with its sirens blaring and lights flashing before stopping behind the tree. Santa traveled around to each car and handed out rolled up colored prints of an old Southern Railway locomotive that was drawn by Morgan.

Shortly after Santa stopped by, local bluegrass band One Fret Over took the stage to perform a set. Before the Christmas tree was lit, Williams delivered a short speech in which he portrayed optimism for the upcoming new year.

“When we put COVID behind us, we’re looking to do more things like this,” Williams said.

As 8 p.m. approached, the tree was illuminated for the first time to the sounds of honking car horns and clapping hands. Morgan said that the tree was built by Spencer Public Works Director Joel Taylor, who spent hours designing and constructing it.

“There’s a hole down there and they poured concrete around it, erected a pole and ran the lights up the side, all within like a day in a half or two days,” Morgan said. “We really want to thank him and his crew.”

Morgan said that he he was impressed with the turnout, which was reported to be around 65 cars. Morgan said he hopes the event becomes a new Spencer holiday tradition.

“We’re looking forward to next year for bigger and better things for Spencer,” Morgan said.