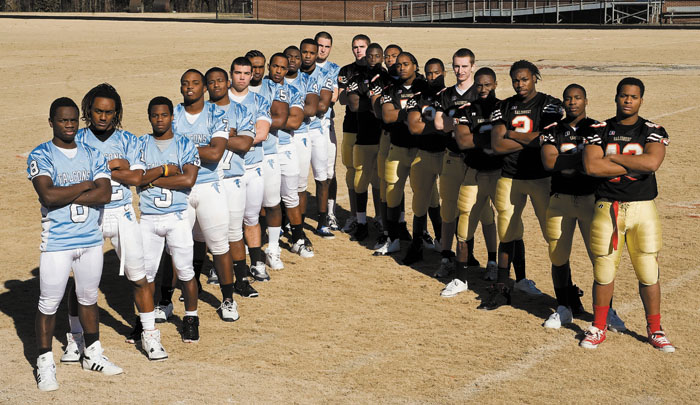 There also may be West Rowan graduates for whom those numbers are magic as well.

The best day ever for Rowan athletics?

Yes. Two state titles in the most popular sport? That has to be it.

The 10th anniversary of those twin titles arrived two days ago on a football-less and newspaper-less Friday. A lot has changed since 2010.

“Looking back on it, that was just a great day for everybody,” Pinyan said. “Two teams in one day, two schools in such close proximity, how often does something like that happen? Don’t get me wrong, Rowan football is not bad right now, but 10 years ago, Rowan football was great. It was a special era. Great players and great coaching staffs. When you walked out in your backyard to play somebody in 2010, you had better bring your ‘A’ game. It wasn’t just Salisbury and West. Carson had a heck of a team.”

When the 2010 season commenced in August, there were plenty of West doubters and West haters who were tired of hearing about coach Scott Young’s Falcons.

Yes, they’d won 30 in a row. Yes, they’d won 3A titles in 2008 and 2009. Yes, they hadn’t lost a county game in forever. But 2010 was supposed to be the season the Falcons plummeted back to earth. K.P. Parks was at the University of Virginia. Chris Smith was a freshman at Arkansas. Jon Crucitti was marching at West Point. Eli Goodson, Timmy Pangburn and on and on. So many household names had moved on. The Falcons looked beatable.

“We really weren’t supposed to make it back that year,” said Louis Kraft, one of West’s tight ends in 2010 and now the head coach of the Falcons. “But we still had B.J. Sherrill at quarterback. We still had a stellar defense.”

When West demolished Davie County 40-0 in Week 3, a Davie team that would regroup to make a playoff run all the way to the 4A state final, some of the doubts vanished.

Week 4 brought a West vs. Salisbury confrontation in Mount Ulla, and this was a powerful Salisbury crew led by quarterback John Knox, running backs Romar Morris and Dominique Dismuke and Darien Rankin, a D-I talent who might show up almost anywhere in Salisbury’s defensive alignment. West had barely survived the Hornets at Ludwig Stadium in a 2009 clash that Pinyan remembers as a  real slobber-knocker,” and that was when the Falcons had Parks.

The final in 2010 was 28-0 Falcons, but it was a much fiercer game than it sounds. It was 7-0 in the middle of the third quarter when West defensive lineman Emmanuel Gbunblee scooped and scored on a Hornet fumble. That was a backbreaker.

When West blistered Mooresville 32-0 in Week 5, the Falcons’ defense owned four shutouts in five games, but the Hornets were having their issues.

Salisbury’s sixth game was a potential season-wrecker. The Hornets had Davie on the ropes in Mocksville when Davie’s Carson Herndon threw an 88-yard touchdown pass to Joe Watson with  3:08 remaining to pull out a 19-14 victory. The Hornets staggered home that night with a 3-3 record and with far more questions than answers.

West smashed the North Piedmont Conference. Carson hoped to stun the Falcons as it had Salisbury, but it was 34-0 before the Cougars finally got on the board in the final minute of the third quarter.

West posted six regular-season shutouts and continued to roll in the playoffs. The third round — 48-28 against Concord — was exciting. The regional final certainly could have been the end of the road. Hibriten came to Mount Ulla with terrific team speed and threatened to take charge. Sherrill threw a 50-yard TD pass to Jamarian Mabry with 5:10 left for the Falcons’ first lead of the night at 20-14, and it held up.

“B.J. (Sherrill) and I were talking about the Hibriten game not long ago,” Kraft said. “He’s watched that film a lot and he says Hibriten probably was better than us and he’s not sure how we won it. But if you build a program right, you’re going to win some of those games you weren’t supposed to. Our program was built right.”

After the brutal non-conference schedule toughened the Hornets, Salisbury went 5-0 in the Central Carolina Conference.

The challenge in the league, as was frequently the case in those days, came from the Thomasville Bulldogs. The Hornets got an 80-yard run by Morris, a field goal from David Simons and a flurry of defensive stops to hold off the Bulldogs, 10-7.

Then the playoffs were wildly exciting for the Hornets.

Down two touchdowns at halftime in the third round against Charlotte’s Berry Academy, the Hornets stormed back with a 24-point fourth quarter.

Down 14-0 with 7:45 remaining to be played against Shelby in the regional final, the Hornets scored three times to win. Shelby made Salisbury throw it and Knox connected on long scoring passes to Keion Adams, Morris and Dismuke. The most memorable play of all may have been made by Simons, who recovered his own onside kick to help fuel an incredible rally at Ludwig Stadium.

“We had kids that always played well whenever we had a lead,” Pinyan said. “But in the playoffs, we weren’t in that position. In the playoffs, our kids showed a lot of resilience and heart. That Berry game, John Knox took over. It was like, ‘this is who we are and don’t mess with us.’  We made comebacks against great football teams. That touchdown catch against Shelby by Dismuke (49 yards) was big-time and was one of the best plays in my 10 years at Salisbury. Dismuke was our unsung hero. He made so many plays that season.”

The tremendous victories by West against Hibriten and by the Hornets against Shelby propelled both teams to state title games scheduled four hours apart. The Post sports staff and photographers split into equal groups to provide coverage. The Hornets (12-3) were playing for the 2AA title against Northeastern High out of Elizabeth City with a 7 p.m. start at Wake Forest’s BB&T Field. The Falcons(15-0)  had a 3 p.m. kickoff against Eastern Alamance. It was a rematch of the 2009 title game and would be played at N.C. State’s Carter-Finley Stadium.

Both of the Rowan schools’ opponents came in at 13-2.

“We had the better field,” Pinyan said. “We were playing on turf. West was going to be playing in some mud.”

Pinyan remembers the nerves he experienced while driving a bus to Winston-Salem.

“I remember being scared to death because I’d never coached in a state championship game,” he said. “Our tight end (Riley Gallagher) was out, and we had a freshman in his spot. We had two young kids, Brian Bauk (the future QB)and Justin Ruffin (another future star), at fullback. There was a lot to be nervous about. The assistant coaches behind me were following the West Rowan game. I was pulling for West to win. I think we all were. I mean, for one week every year you absolutely hated those guys, but the rest of the time you respected the success Scott Young and that program was having.”

In Raleigh, the Falcons encountered totally unexpected adversity in the second quarter.

The seemingly indestructible Sherrill, who had broken the career record for touchdown passes in the county, went down with a concussion after staking the Falcons to a 14-0  lead with his own TD run and a 68-yard scoring pass to Jarvis Morgan. West missed the PAT after the first touchdown. Sherrill was hurt running for a 2-point conversion after the second one.

When Eastern Alamance broke a scoring run late in the first half, the Falcons’ lead was just 14-7 at halftime.

It was a grim locker room at the break.

“B.J. wasn’t going to be able to play in the second half, so we were all a little wide-eyed at halftime, and it was like, ‘Oh, boy, we’re in for a dogfight now,'” Kraft said. “But then we came out for the third quarter and we scored right away (a 54-yard run by Dinkin Miller) to regain control. That touchdown told the story. Our offensive line and our defense played lights out in that second half, played with such determination that our backup quarterback Connor Edwards just had to man the ship. Connor did his job.”

West won convincingly, 34-7, holding an Eastern Alamance team that scored 42 points against Havelock, to seven first downs and to negative rushing yards in the second half. Miller finished with 211 rushing yards on 22 carries. The Falcons made it three titles in a row and 46 straight victories. At the time, it was the nation’s longest active streak. It would be stopped by Mooresville on opening night in the 2011 season.

That night in Winston-Salem, Salisbury got a few breaks and made more breaks happen. A struggle was expected against a talented opponent, but a rout took place.

“The biggest break was a John Knox fumble (late in the first quarter) that bounced right back up to him, and he broke a long run,” Pinyan said.  “John got it down there close, and then Dismuke put it in the end zone and we scored first. Then we got a fumble recovery right after that, and now we’re up two TDs at the half.”

Salisbury threw the ball only five times and two of those passes were intercepted. But the Hornets’ defense was dominant. Second-half touchdowns by Morris and Bauk and a Simons field goal made it a 30-0 final. Morris had 97 of the Hornets’ 230 rushing yards. Salisbury had won 10 in a row for a history-making season, after starting 3-3.

“We wanted Salisbury to win,” Kraft said. “We didn’t know those guys from Elizabeth City. But we knew John Knox. We knew Romar Morris. We knew Darien Rankin.”

“We had teams every year from 2009 to 2012 that could have won it all, but 2010 was the year we got it done,” Pinyan said. “That was a day I’ll never forget, and not just because we won, but because West won, too. Rowan County football did something 10 years ago we can all be proud of. We did something the whole county can be proud of.  Lots of sports have had great days, but if there’s ever a better one than 12-11-10, I’m ready to see it.”