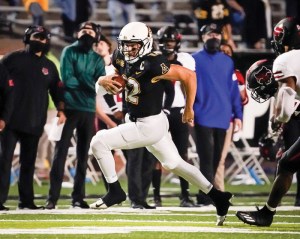 BOONE, N.C. — App State is going bowling again, this time at the beach.

After capping an 8-3 regular season with a 34-26 win at rival Georgia Southern, the Mountaineers have accepted an invitation to play North Texas (4-5) in the first Myrtle Beach Bowl on Monday, Dec. 21.

The game at Coastal Carolina’s Brooks Stadium in Conway, S.C., is scheduled for 2:30 p.m. on ESPN. Information on ticket availability will be finalized in the coming days.

App State will be making its program-record eighth national television appearance of the season and its sixth bowl appearance in as many postseason-eligible FBS seasons. With a 5-0 bowl record since the 2014 transition, it is the only FBS program with no losses or ties in at least five appearances.

The Mountaineers and North Texas Mean Green will meet for the first time. UNT, coached by Seth Littrell, went 4-5 in the regular season, including a 3-4 mark in Conference USA games to finish fourth in the West division. App State is 2-0 in bowl games against C-USA opponents (2018 vs. Middle Tennessee and 2019 vs. UAB in the New Orleans Bowl).

The Myrtle Beach Bowl will be the Mountaineers’ fourth different bowl site, as they won back-to-back Camellia Bowl games in Montgomery, Ala., from 2015-16 and pitched a Dollar General Bowl shutout in Mobile, Ala., before winning back-to-back New Orleans Bowl games in 2018-19.

Shawn Clark made his head coaching debut in the 31-17 win against UAB in last year’s New Orleans Bowl, and this year’s team clinched second place in the Sun Belt Conference’s East Division after earning at least a share of the last four league titles.

On Saturday, the Mountaineers erased a 14-0 deficit in Statesboro, Ga., and outscored Georgia Southern by a 24-3 margin in the first 17-plus minutes of the second half.

App State’s three losses this season are to teams with a combined record of 27-2.