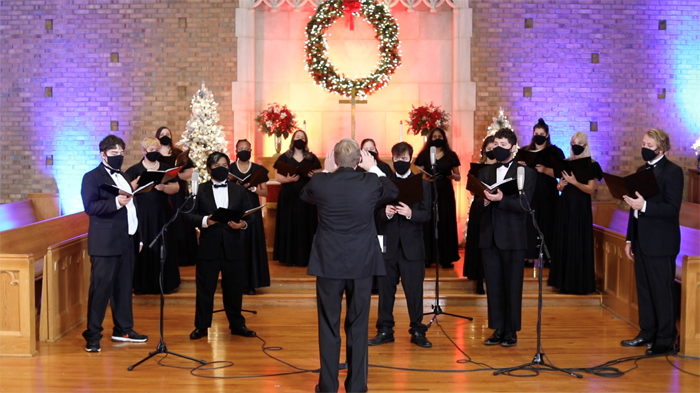 SALISBURY — Christmas 2020 came early to the Catawba College choirs and ensembles, and now, they are bringing it to you.

Starting with rehearsals in August, the students performed the College Service of Lessons and Carols, complete with a beautifully decorated chapel and a four-camera film and sound crew.

The service, now in its 33rd year, is traditionally performed for the college and community in three services during the first week of December. The pandemic closed those doors, but Dr. Phillip Burgess, director of vocal/choral activities and college organist, was not deterred.

“This service is far too important to not be able to do it,” he said.

With the permission of the college president, Dr. David Nelson, and the support of the College Development Office, Burgess and his students staged the virtual performance that will be available for viewing tonight at 7. It can be accessed at Catawba.edu/Carols, the College’s YouTube and Facebook channels and on Hotwire (Salisbury only) Channel 397.  After the first performance, the service will be available for viewing any time on the College’s website and social channels.

The “up” side of the virtual performance is that it is now available to a broader audience and viewers can get up close and personal with Catawba’s newly renovated Casavant organ, as it is played by Burgess. Traditionally, the services fill the chapel with attendees brought in by shuttles to help the crowd flow.

The service is called Catawba’s “gift to the community,” with community donations helping with costs.

Dr. Nelson said that the college is thrilled to bring Catawba’s Lessons and Carols to people virtually this year. “During a time when we hear ominous warnings of a ‘dark winter,’ we hope the tidings of great joy from the performances of our students and faculty will bring a bit of light to many,” he said.

This year, Dr. Burgess said the biggest challenge was the clock. “We really wanted to complete the rehearsals and filming,” he said. “Any type of COVID outbreak on our campus would force us to leave. We started learning the music the second week of August and finished Sept. 18.” Another plus is that with the Lessons and Carols performance behind them early in the semester, the students had time to work on a pops Christmas concert that involves the College Marching Band, the Jazz Ensemble, and the choirs. It can be viewed on Facebook.

To ensure safety during rehearsals and performances, Burgess used safety guidelines published by the American Choral Directors Association. “I had a 106-page document on safety in singing and playing instruments,” he said. “Students practiced social distancing, used plexiglass shields for rehearsals, and sang straight forward, not facing each other. We adhered very closely to the guidelines.” The choral and ensemble groups were the only ones using the facility, which was fumigated every morning. “The college policy is extremely strict and that helped us to stay open,” Dr. Burgess said.

The students really bought into the project, Dr. Burgess said. “To me, the most interesting thing about the video is watching the faces of the students,” he said. “They know how important Lessons and Carols is to the college and community. This is very good theater, with the blending in and out of the singers and readers, and the lighting is spectacular.” The college’s marketing firm, Miller Davis Agency, recorded and produced the video.

Catawba’s service is patterned after the “Nine Lessons and Carols” service associated with King’s College in Cambridge, England, that started in 1918. Origins of the service are attributed to Truro Cathedral in Cornwell, England, dating to 1880. The bishop, the Rev. Edward White Benson, was concerned at the excessive consumption of alcohol in Cornish pubs during the festive season. He sought a means of attracting revelers out of the pubs and into church by offering a religious celebration of Christmas with the Christmas music interspersed with Bible readings.

At Catawba, Dr. Burgess works with the Rev. Dr. Ken Clapp, senior vice president and director of the Lilly Center, and Dr. Steve Etters, chair of the department of music. The brass ensemble, directed by Etters, provides music during the prelude.

Dr.Clapp said that the service sets the tone for the Christmas season. “Music is so integral to the worship experience, when we are being called to be in that spirit of preparation,” he said.