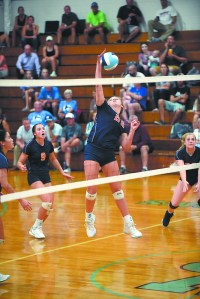 West Rowan won in five sets against South Iredell on Friday in Mount Ulla and moved into a tie for second place with the Vikings in the North Piedmont Conference at 5-2.

KK Dowling had 17 kills, 20 digs and two blocks. Kelcie Love had 16 kills and 13 digs. Emma Clarke had 10 kills. Anna Blackledge had four blocks and three kills. Madelyn VonCanon had six kills. Brooke Kennerly had 12 digs when she was injured in the third set. Ashlee Ennis had 27 digs. Allison Ennis had 32 assists. Noe Gaeta had 23 assists and two big kills in the fifth set.

Dan Crosby made a hole-in-one at Corbin Hills on Thursday, the first of his long career.

Crosby aced the No. 5 hole from 173 yards with a 4-Hybrid. Crosby was playing with Don Bishop, Gary Carver and Don Link.

Salisbury’s girls opened the season with a 104-65 win against Ledford.

The top Gray Stone runner was Wesley Rodgers. He was seventh in 18:36.

Northwest’s Olivia Andrews won the girls race and led the Trojans to victory. Owen Evans ran 17:16 to lead the Northwest boys to a win. The top A.L. Brown runner was Kevin Stegall,  who was third in 17:59.

Caleb Mauldin (West Rowan) had six points and three rebounds in 11 minutes for North Georgia in Saturday’s 81-63 loss to Chattanooga.

David Tripp (A.L. Brown) scored 20 points for Milligan in an 88-83 win against Montreat on Saturday.