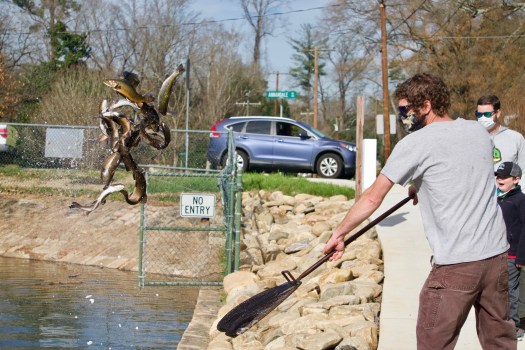 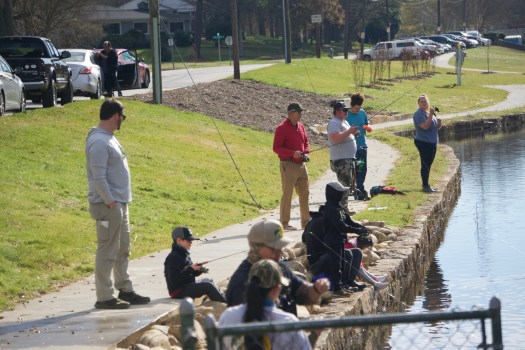 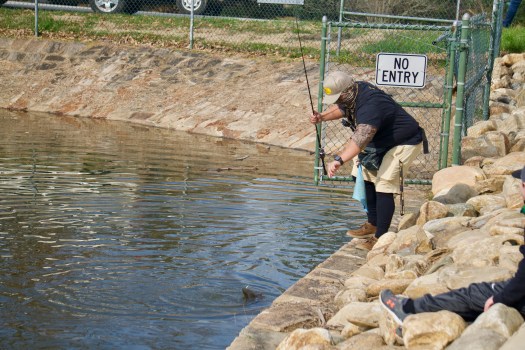 SALISBURY – Trout fishing is not a normal activity in Rowan County, especially in City Park lake.

The fish, native to mountain streams, are popular fare for anglers in the fall, but fishermen usually need to make a trek west to the North Carolina mountains to find the fish in state.

But trout made their appearance in Salisbury on Thursday afternoon when about 1,700 pounds of mountain-native trout were trucked from Brevard for the trip to Salisbury for local anglers to hook in two lakes.

It was part of a project by the N.C. Wildlife Resources Commission, which stocks a number of area lakes each year. This year, the commission put 1,291 pounds into the lake at Salisbury Community Park. It also added City Park lake to the stocking list, dropping off 439 pounds there.

Hanna said the stocked lakes draw in people from surrounding towns. It’s also an opportunity to go trout fishing for people who have never done so.

“I love to fish, and that’s part of why I’m in the industry I’m in,” Hanna said.

Catching trout only requires a standard North Carolina fishing license. Fishery biologist Casey Grieshaber said the commission encourages people to harvest the trout because, while they do surprisingly well in the lake, they will not survive long-term.

Regulations allow you to keep seven per day.

Almost immediately Thursday, people began gathering at the banks as the fish were dropped off. After the truck arrived at City Lake Park, there were cars lining the streets.

Hatchery technician Graham Laing tossed nets full of trout into the lake as anglers began to look on. He said the stocking work is only done in December.

Graham said a lot of people ask questions when they see the stocking truck. Some of them have been fishing in streams their entire lives and never realized this happens.

Jay Yang came out to fish the stocked lakes for the first time on Thursday. Yang lives in the Hickory area and said he heard about the stocking online.

“I always travel around and find new spots,” Yang said. “I hit up all the spots that I haven’t hit before.”

For stocking events like Thursday’s, Yang said, he makes the trip because it is fun to catch fish easily. Yang said he throws back small fish and aims for a larger catch. Fishing is an escape, he said, and there’s just something special about feeling a bite on the line.

“You just want to land it because it’s an achievement,” Yang said.

Matt Talbert, a lifelong fisherman, lives in Concord and mostly fishes for crappie and bass, but he likes to trout fish when the weather cools off. He has been fishing stocked lakes in Salisbury since 2017.

Talbert also likes to aim for the larger fish

“Last time I went to the mountains, I caught about 30-some fish, but only kept about eight good ones,” Talbert said.