Moody gets drive-thru superintendent sendoff from the community 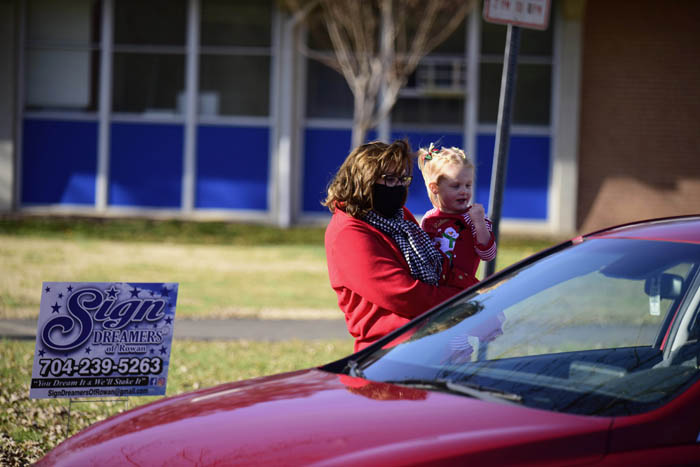 Retiring Rowan-Salisbury Schools Superintendent Lynn Moody greeting someone while holding her granddaughter Avalynn. Some people dropped off cards or other gifts and some just had well wishes. CARL BLANKENSHIP/Salisbury Post

SALISBURY – Standing in front of Knox Middle School on Wednesday, Rowan-Salisbury Schools Superintendent Lynn Moody saw some people she works with regularly and others she hasn’t seen in years.

It was a pandemic-style sendoff for the retiring superintendent, who is in her final days leading a district of 18,000 students. Cars filtered through for a couple hours, and Moody spoke to everyone as they made the one-way loop around the school. Knox and other schools in the county were closed Wednesday as part of RSS’ blended learning model.

Barbara Seago drove all the way from Orange County just to catch up with Moody, who hired her as an administrative assistant 23 years ago this month. Moody was director of career and technical education with Orange County Schools at the time. The two have kept in touch over the years, and Seago’s grand children went to Rowan-Salisbury Schools.

“She was the best boss I ever had, just a wonderful person,” Seago said, adding everyone respected her.

Seago said she did not expect Moody to stay with OCS long.

“She said ‘why do you say that?'” Seago recalled. “I said, ‘Because you’re so good. Somebody is going to snatch you up.’ I think we worked together a couple of years, and sure enough Wake County snatched her up.”

Seago recalled Moody driving all the way from South Carolina to visit after her father died.

RSS Director of Induction Susan Heaggans sees Moody every day, but said she wanted to take the time to come to the drive-thru. Heaggans has been with the district for about 15 years and saw Moody take over leading the district.

“She’s very driven,” Heaggans said. “She is all about kids. She just kept us focused.”

Moody said she enjoyed the pandemic-style goodbye, especially when it’s already hard to connect with people.

“It was good to see everyone’s faces in a safe way,” Moody said.

The retiring superintendent said she feels excited to be going into retirement, but is also sad to move on from the career she loves.

“It’s will be difficult,” Moody said. “It’s been an emotional time and a happy time, both. So it’s a bit of a rollercoaster ride. I’m really looking forward to having some family time, but I am definitely going to miss the work and the people.”

Moody will retire on Dec. 31 after seven years with the district. She oversaw major changes such as the special renewal status granted by the state, the completion of Wallace Educational Forum and the district’s handling of the COVID-19 pandemic,

Moody’s replacement, Guilford County Schools Chief of Schools Tony Watlington, was unanimously approved by the district Board of Education on Monday.

Moody said her job now is to help the district transition to the new superintendent. She is still planning and has been visiting principals one-on-one to revisit the past seven years.

Moody said she met with Watlington on Wednesday morning to discuss the future of the district.

Board Chair Kevin Jones said the district hopes to have a seamless transition between Moody and Watlington.