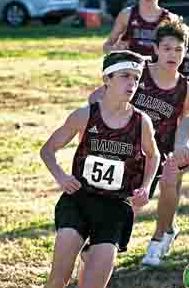 Could it possibly get any better than that?

“It’s hard to verbalize how I felt,” Coach Julian said. “To see them running together like that, this was a total dream.”

“Super-glad to accomplish that,” Noah said.

While there were reasons to be “super-glad,” this was definitely not business as usual.

Every meet to determine the Rowan County champion since 1997 has been held at Dan Nicholas Park, but this time, due to construction, it was held on a different course. Competitors said it was a lot like running the old course in reverse.

Due to the fall season being delayed by the pandemic, it also was the first county meet to be contested in the chill of December.

“It was muddy, but it could have been so much worse,” Noah Julian said. “The runners from some of the other schools came out here on Tuesday. They said it was a lot muddier yesterday than it was today.”

Temperatures actually nudged their way a little above 50 degrees, so what could have been a biting wind on an ugly day was merely a gentle breeze.

“The weather was a blessing,” Coach Julian said. “I think all of our guys will tell you they’d much rather it be 50 than 85 and humid. These were great temperatures to run in.”

Eli was just six seconds behind his sibling and showed that he’s likely to be a three-time county champ, just like his older, bigger, taller, longer-striding brother.

Their role all season has been chaser and chasee. Eli has never caught Noah, who recently turned in a PR of 16:29, but Eli is always in hot pursuit.

“This was my first time running on this course so I was happy with the way I did today,” Noah said. “And I was so proud of Eli. He’s having an amazing season for a freshman. He was right on my heels for a lot of the race before he finally started to fall back a little bit.”

While the Julian brothers were dominant, they’re just two people and four legs and it takes five scores to win a cross country meet.

The Raiders got plenty of assistance from senior Nolan Miller (5th), senior Landon Cromer (7th) and freshman Grayson Cromer (8th) to log a winning score of 23.

“Nolan Miller and Landon Cromer have been the heartbeat of this team for years,” Coach Julian said. “They’re always pushing everyone to do more. We’ve got an unusual dynamic, with a team of mostly freshmen and seniors. We couldn’t have a better group of seniors for the young guys to learn from and look up to.”

Coach Julian and his wife, Rebekah Frick Julian, who coaches South’s girls team, marked, landmarked and measured the revised Dan Nicholas course together — foot by foot — during the summer months.

They toiled on the course on their wedding anniversary, as appalling as that concept might sound to couples who don’t live and breathe cross country.

“Well, I’m lucky enough to be married to a girl who would rather put a cross country course together than go out to any sort of fine-dining restaurant I could take her to,” Coach Julian said.

East Rowan continues to work its way back to being a factor in cross country. The Mustangs haven’t won a title since 2013, but they placed second behind the Raiders on Wednesday, led by the efforts of Thomas Ferguson. He moved up from his ninth-place finish last season and took third in 18:08. East’s Brayden Self came in fourth, about seven seconds behind Ferguson. The Mustangs’ Carson Ritchie was 10th.

As the worst-seeded teams, that meant Salisbury and Carson ran in the early wave that left the starting line at 1:30 p.m. Carson’s T.J. Jones was at a disadvantage, basically running alone with no one pushing him or pacing him, but he managed 18:35, which was good for sixth place. He was the only runner from the first wave to crack the top 12. The top dozen runners are all-county.

West Rowan, county champ as recently as 2017, ran in the second wave, along with the Raiders and Mustangs. Ethan Wilson (11th) and Luke Harrison (12th) helped the Falcons place third.

South didn’t get a perfect score, but it’s the first school to win three straight county championships since East Rowan did it in 2011-13.

Needless to say the Raiders are hopeful of a monster season, a total dream season. They’re ranked at the top of the region.

“Seniors and freshmen might be a magic formula for us this year,” Noah Julian said. “We’re happy we were able to get this race in today and now we want another conference championship.”

The CCC Championships are scheduled for Dec. 22 at Salisbury Community Park.