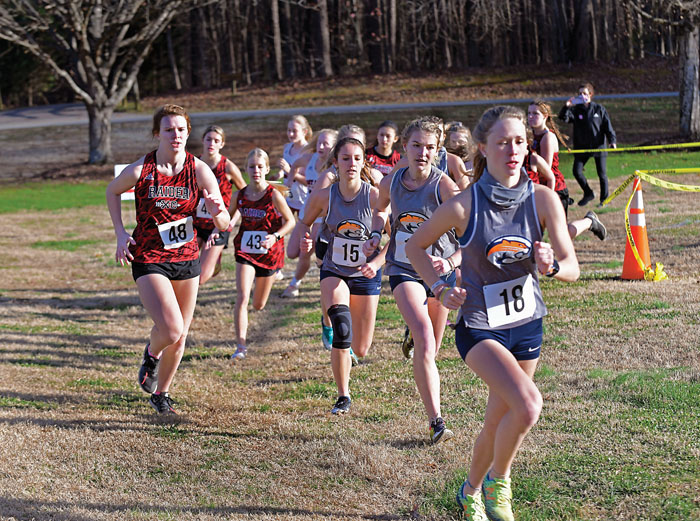 Carson's Camden Corley #18 takes the lead with teamates just behind her. Corley was the winner of the race. .photo by Wayne Hinshaw, for the Salisbury Post

SALISBURY — Carson junior Camden Corley liked the cool weather, liked the way she felt and liked the new course that had to be laid out at Dan Nicholas Park due to construction.

Except for one little thing.

“That last hill was really tough,” Corley said. “But I kept going. I kept pushing.”

Corley appeared exhausted by her battle with that incline as she approached the finish line. She was moving at only a moderate pace, while sophomore teammate Makayla Borst, a soccer standout, was sprinting like she was on a breakaway and was closing in fast.

Corley summoned her second or maybe it was her third wind and held on — by less than a second. She and Borst were both clocked in 21:29.

Carson, coached by Les-Lee Ihme, did register another win. The Cougars have established themselves as the program to beat in the county. Over the last seven years, the Cougars have claimed five county championships. They were second to Salisbury (by one point) in 2016 and runner-up to South Rowan in 2018.

The Cougars frequently boast an army of runners, but they’re down to nine this year. Only the top seven were allowed to compete on Wednesday due to COVID-19 limitations.

“Corona just about killed us this year,” Ihme said. “We lost runners because we normally do a lot of fun things together in the off-season and the pre-season as a cross country family. This year we couldn’t do any of those things, so a lot of kids didn’t run.”

Enough Cougars ran to easily get it done.

Taking third place was Carson senior Lani Isley. No one was more surprised than she was.

“My legs felt better than they have in a while,” Isley said. “And the weather was good. Not that cool weather makes it any easier to breathe.”

Isley, a varsity soccer and basketball player for the Cougars since she was a freshman, usually produces her best cross country performances in the county championships. She placed 10th in 2019. The top 12 make all-county.

“I think Lani is one of the best athletes Carson has ever had,” Ihme said. “Some years she’s had to pass someone to get 12th, but now she’s a four-time all-county runner and she’s been part of three team championships, and we’ve only had one other girl (Jessie Nichols) who has been as decorated as Lani.”

“Those two have some big jumps from last season’s times,”  Ihme said.

South Rowan’s Bethany Rymer, the county champion in 2018, took fifth and prevented Carson from having a perfect score.

But the main story was Corley, who was eighth in the county meet in 2019.

“There’s no school on Wednesdays, but I was up at 8 a.m. and thinking about this race,” Corley said. “I spent all day thinking about it and was getting very nervous because I didn’t know what was going to happen.”

What happened was all good for Corley and Carson.

“I thought I was going to have to wear long sleeves, but then the sun came out and I was able to dress normally,” Corley said. “There was some mud on the course, I was stepping in and out of puddles a lot, but it all went well. I led the race all the way.”

The field was reduced right from the start. East Rowan’s Meredith Bonner was expected to be one of the frontrunners, but missed the meet with an injury. Salisbury’s Sutton Webb, a Georgia soccer commit who finished third last season, was not permitted to race. Officials explained she hadn’t competed in any previous meets this season and didn’t have a qualifying time.

East Rowan’s Adalie Harrison and Carson’s Taylor Conrad, who ruled the county last season, graduated, so the field was wide open for 2020.

Corley stepped forward to fill the void, with Makayla Borst right behind her.

“Nothing about this season is ideal,” Ihme said. “But Camden has started to see some success, and today she took that success and she ran with it. And I’m very proud of Makayla Borst.  Just a sophomore, but she’s a super-athletic girl.”