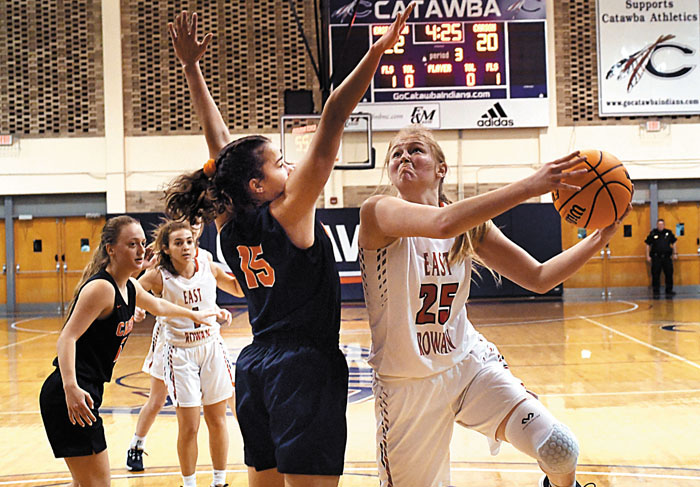 SALISBURY — The year 2020 is receiving votes as the worst in the history of mankind, but Carson girls basketball coach Brooke Stouder will argue that.

She became a mother for the first time in 2020.

With baby Blakely Stouder fed, changed and preparing for bed with another catnap in daddy’s arms, the coach headed out the door to the first basketball practice of a brand new season, her 15th.

She’s the only head coach Carson’s program has ever had. She started her career 4-67, but now she’s 216-158, the second-most wins of any girls basketball coach in county history. The last three seasons have been 25-4, 27-3 and 25-4. Four members of a senior class that helped trigger that spree of wins when they were varsity freshmen — Colbie Perry, Carleigh Perry, Ellie Wilhelm and Lani Isley — are still going strong.

“We’ve got a special senior class that knows how to win, and the most important goal is to make this season fun and memorable, a season with no regrets,” Stouder said. “If not for the pandemic, I believe these senior girls would have won 100 varsity games in their careers. That’s a great accomplishment.”

Stouder’s first practice had to wait until 7:30 p.m to get started. That 7:30 to 9:15 scheduled gym time was strange, but these are weird times.

Carson, like the rest of the county, has a gym that is home to the volleyball teams as well as the boys and girls varsity and jayvee teams. The COVID pandemic has made volleyball a winter sport for the first time. Carson’s girls basketball players had to wait their turn and were the last to take the floor on Monday.

“Well, I hate it’s so late,” Stouder said. “I like to practice for two hours, but with the girls wearing masks, we’re not sure how long we can go. There’s going to be a lot of trial and error for all of us at the start.”

It’s going to be odd basketball, with masks everywhere, frequent breaks, socially distanced benches and probably with no fans in the stands, except for parents.

“Right now, we’re just excited to be playing, excited to have a season,” Stouder said. “Every game that we get to play will be precious and we’ll enjoy every minute.”

Carson and Salisbury, which is certain to be a powerful force in 2A, have agreed to play a scrimmage on Dec. 30, just to provide a test for each other. Scrimmage or not, it may be the best game of the season.

“We know how good Salisbury is,” Stouder said. “That scrimmage will give us at least a little taste of a Christmas tournament.”

There also was a late start for West Rowan boys basketball coach Mike Gurley, who started his 24th season in Mount Ulla on Monday night.

“I’m sure that in Iredell County where every school has two gyms they’ve got a little better start time than the Falcons do,” Gurley said. “Not that I’m complaining about the system. That’s just the way it is. We’re going to do what we can do.”

Gurley’s coaching record is 424-211 at West — he’s Rowan’s all-time leader in basketball victories — and he was 102-39 at Lexington when the Falcons hired a young coach to lead them in the summer of 1997.

Gurley has made a living as a teacher/coach. He also could have done well in the stand-up comedy world.

But he can be serious. He’s been deeply moved by the pandemic’s effect on not only his own ballplayers, but on the student population as a whole.

“Our high school kids have had their lives pulled out from under them in the last nine months,” Gurley said. “So our goals go beyond winning the conference. Our goal is to give these guys some normalcy back in their lives.”

Gurley and Dadrian Cuthbertson are going to be coaching a terrific team. Big man Zeek Biggers (6-6, 330), a Georgia Tech football recruit, is going to be handful in the paint. Rowan County Player of the Year Jalen Moss, who got it done extremely well on both ends of the floor in 2019-20, is back. So is sweet-shooting Macari Allison. Joining the fun are three high-scoring transfers who can light it up — A.J. Mauldin (Carson), Braden Graham (South Rowan) and Juke Harris (North Hills).

When the Falcons found out they would have to wear masks in order to play, Cuthbertson went out and got them the “safest and lightest” masks available.

If everyone is on the same page, West will have the strongest starting lineup it has fielded in many years. And Gurley usually excels at getting everyone to buy in to a team concept and putting wins above scoring averages.

“It’s going to a different season for us because usually we’re waiting on the football players to finish with the playoffs,” Gurley said. “That’s been the case ever since Coach Scott Young brought playoff football to West on an annual basis. This time basketball comes before football.”

Often, West has had many combination basketball/football athletes. Gurley said Biggers is the only one this season.

Gurley experienced major adversity in the offseason, falling off a ladder on his birthday, of all days, and tearing his Achilles tendon.

“Well, Kobe (Bryant) came back from that same injury and he did pretty well,” Gurley said. “There’s a little swelling after I’ve been on my feet all day, but I’m OK. I’ve been walking for two weeks now. The only reminder of the accident is a nice 6-inch scar on the back of my leg. Fortunately, my wife doesn’t look at the back of my leg.”

Gurley, girls coach Ashley Poole and AD Todd Bell have conducted conversations about limited fan attendance. Gurley is preceding with the belief that there will be a limit of 25 as there is in volleyball. The plan is for at least one parent of every player to be able to attend the home games. The gym will be cleared after the girls game. Then a different set of fans will be admitted for the boys game.

“Hey, everyone in the county will sell out every game this season,” Gurley quipped. “But I hate fans will be so limited because a lot of people would get a kick out of seeing me with a mask covering my mouth.”

It’s not ideal, obviously, but at least it’s basketball.

“We’ll have seven or eight seniors, really dynamite kids, and we’ll do whatever we need to do in order to play,” Gurley said. “These kids have basically been trapped in their houses for months and they’ve been seeing their friends at school two days a week. Yes, it will be a modified season, but what I want more than anything is to give them back some normal. They deserve that.”