Five deaths, another triple-digit increase in cases reported in Rowan 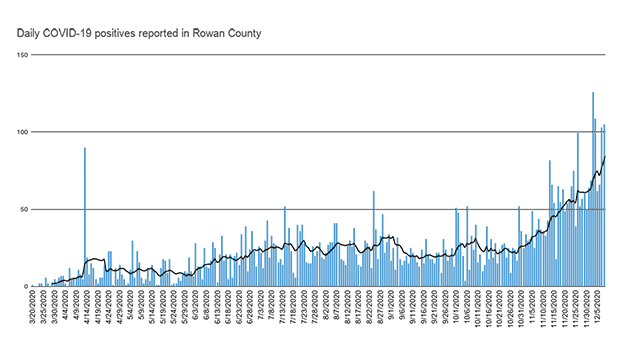 The increases mean there have been 143 deaths attributed to COVID-19 in Rowan County, with an average age of 80 among those deaths.

Non-congregate deaths number 56. There have been 87 deaths at congregate living facilities such as nursing homes or residential care facilities.

Congregate deaths are as follows:

• 9 at Trinity Oaks Health and Rehab

• Two at the Laurels

• Two at the Meadows of Rockwell

Tuesday’s case increase of 105 also means there have been four triple-digit increases in the previous week and that cases are increasing at their fastest rate yet. One week ago, there were 5,746 total cases of coronavirus. That number was 6,386 on Tuesday.

There are currently 1,304 active cases of COVID-19 in the county, which reflects 4,939 recoveries, and 18 Rowan residents hospitalized.

The average of those testing positive is 44.2, while the average age of people hospitalized is 64.

While the number of hospital beds occupied in the county is released once per week, regional statistics are updated daily. There are 684 beds occupied by COVID-19 patients and 3,665 total beds being used in the Triad Healthcare Preparedness Coalition (where Rowan County sits). There are 1,467 beds that are considered empty and staffed and 938 that are not staffed in the same region, which has the most people hospitalized in the state. Second is the Metrolina Healthcare Preparedness Coalition, which is centered around Charlotte.

The N.C. Department of Health and Human Services says 341,041 people in North Carolina have recovered and 5,605 have died. There are 2,373 people hospitalized across the state, a number that’s also been steadily rising.