Ask Us: What’s the status of ‘Fame’ monument’s relocation? 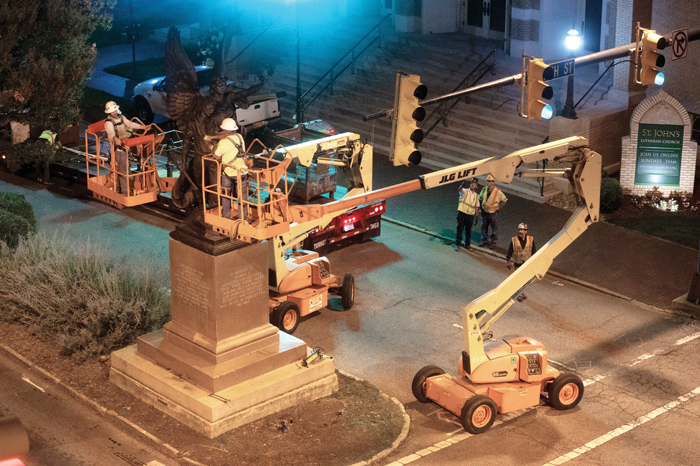 Five months after its removal from downtown Salisbury, the city says it’s still waiting on the completion of several studies before the “Fame” Confederate monument can be relocated to its new home at a historic cemetery on North Lee Street.

In June, the Robert F. Hoke chapter of the United Daughters of the Confederacy, which owns the statue, and the city reached an agreement to relocate the monument to a historic cemetery where Confederate soldiers are buried. The agreement came after Salisbury Police Chief Jerry Stokes and the city council deemed “Fame” a public safety issue with a vote at the June 16 meeting.

The city has paid for the removal, which took place in July, and will pay for its storage and relocation. The UDC received an easement to the piece of property the monument will soon sit, while the Historic Salisbury Foundation will oversee privately raised funds for site amenities.

Mayor Karen Alexander told the Post the process is moving much slower than the city anticipated, but that all engineering studies must be complete before bids can be requested on building the site amenities, which will include an 8-foot-high wrought iron fence erected around the monument, lights and security cameras to ensure the statue is preserved and protected.

No money has been spent yet. Alexander said each component of implementing site amenities will be bid separately. Once all are received, the bids will be combined to ensure the project is within budget. If not, more money will have to be raised by local community members.

Ed Norvell, a local philanthropist and descendant of the original UDC group that erected the monument in 1909, said funds raised for the monument remain around $65,000.

Some of what pushed the schedule back, Alexander said, involved exploratory work to ensure the foundation wouldn’t interfere with any graves. She said the city has received bids for the pavers and concrete pads upon which the monument will sit as well as wrought iron fencing.

Ongoing studies include a foundation study that focuses on soil borings to determine the weight that can be supported, Alexander said.

The city has also worked with Duke Energy to upgrade the type of lighting that will be at the site. The preliminary studies for that component have been completed, and the city is within the final bidding stage.

“There are a lot of moving parts,” Alexander said. “And then all of that has to be coordinated.”

The Public Works Department, Salisbury Engineering Director Wendy Brindle and outside consultants have overseen the process. Alexander said a local resident has offered to help pro bono. Another individual who assisted and specializes in soil engineering will be paid by the funds raised for the monument, she said.

Once the new location is ready, Alexander said, cranes will have to be used like they were in July to remove the monument. That it shouldn’t take longer than a day’s work, she said.

Ask Us: What is being built next to Maranatha Bible Church?

Ask Us: Where did the purple street lights come from?

Ask Us: Why will U.S. Highway 70 be closing in Cleveland?