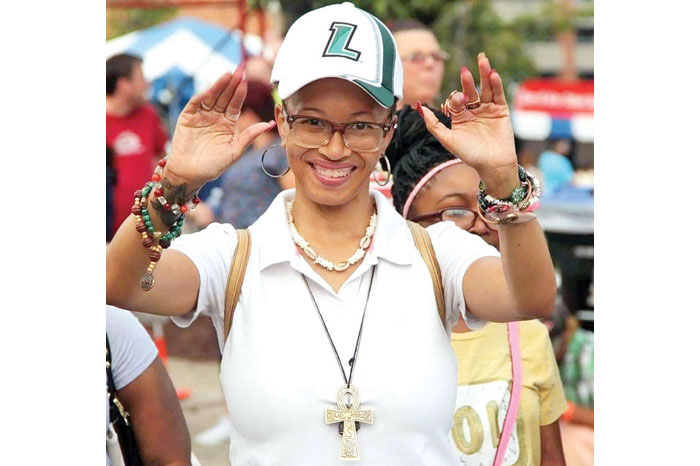 Coast Guard Veteran Lavinia Jackson is all smiles. However, that wasn’t always the case. She relied on help from a VA PEER Support specialist to help manage a trauma she suffered in the military.

When it comes to mental health, many are familiar with psychologists, psychiatrists and social workers. However, there is another valuable resource — PEER Support specialists—  a group that draws on past experiences to help bridge the gap between veteran and provider.

Coast Guard veteran Lavinia Jackson knows how valuable a knowledgeable PEER Support specialist can be on the road to recovery. Jackson was diagnosed with post-traumatic stress disorder from a rape while on active duty.

“It wasn’t from a fellow Coastie,” she said. “It happened a block from base by a civilian. One or two men, I couldn’t remember.”

She’d had one drink at the enlisted club prior to going to a party off base. “This guy hands me this cup with red liquid,” she said.

She refused it. Minutes later, he was still talking.

“He forced me to drink it because it spilled on my clothes,” she said.

Several minutes, later she felt strange, woozy, and was walked to her car.

“I remember sitting on the couch and then I woke up and my clothes were torn,” she said.

She didn’t even remember the drive home the next day. Friends kept her calm. She took a shower, which she was not supposed to do. A rape kit was performed on her, but nothing was found. Jackson began to have flashbacks and her life was changed completely. The perpetrators were never caught.

“I couldn’t remember faces,” she said. “There was no way for me to identify … I don’t know.”

Jackson’s current attitude is something at which to marvel.

“There is always a lesson and a blessing even in the greatest of tragedies,” she said.

Enter PEER Support Specialist Sherrie Cook, an Air Force veteran with 10 years of VA experience with the Salisbury VA Health Care System. She decided she wanted to help veterans who were challenged with mental health issues and educate them about recovery and what is possible.

“You can get back to a semblance about what normal living is like,” said Cook. “One of the keywords I have is hope. Recovery is possible because there is hope. You don’t have to look at the world from the bottom. You can look up and see that there is a light at the end of the tunnel. And that can bring you ways of changing how you think about life in a positive manner.”

It has taken time and lots of counseling and medication, but Jackson has turned the corner.

“Where do I begin? The person you are on the phone with now is not the person who began PEER Support,” Jackson said. “I was quiet, withdrawn, extremely habitual. I wasn’t engaged in the community. PEER told me someone is in there and we are going to give you the skills to bring her back. The beautiful thing about PEER Support is that there is no pressure. She allowed me to be quiet and observant … enough to get me to come back. They allowed me to play the game and knew I was using old to habits to mask and cope. It allowed me to know other veterans are struggling. PEER Support allowed me to put that on a shelf and be a human being again.”

PEER Support specialists must have gone through either substance abuse issues or mental health issues. They have been through what they are trying to show others how to deal with.

“I struggled with how I was thinking about myself,” said Cook. “I never went through drugs, but some of the experiences I had in the military like being told I was nothing, that I couldn’t do certain jobs because I was a woman…it made me feel bad, like I was not capable of doing a lot of things. It didn’t empower me. It made it really hard to feel good about myself.”

Cook participated in a program with the Durham VA in North Carolina. She got amongst a group of individuals that told her a mental health challenge didn’t mean she couldn’t contribute to the world. That, along with medication, really helped her.

“It helps me share with veterans who are not sure about themselves, that talking and seeing that recovery is possible and something they can do,” she said. “It’s possible to set goals, follow your dreams, and achieve goals.”

One goal can be getting up in the morning and doing basic hygiene. It may sound simple, but taking a shower, putting on clean clothes, and eating breakfast are things one can do to accomplish a goal.

“Basic everyday things that we do that sometimes people who are mentally challenged don’t do,” Cook said. “They let things slip. It is important to hold them accountable. When you let the small things slip, the big things can seem insurmountable.”

“It allowed me to know other veterans are struggling,” said Jackson. “Peer Support allowed me to put my feelings on a shelf and be a human being. PTSD…that’s a big pill to swallow.”

That was the first step for Jackson, to face her problem head on and not dwell on the negative.

“Each day is a new opportunity to experience hope,” said Cook. “When life is hopeless, they don’t see anything but that. We help them see an alternative — to see not yesterday but to look at the future. That is where hope comes in. Most days, my job is great. When it becomes overwhelming, I use the skills that I taught other people to help myself.”

Veterans interested in participating in PEER Support need a referral from their mental health service provider.