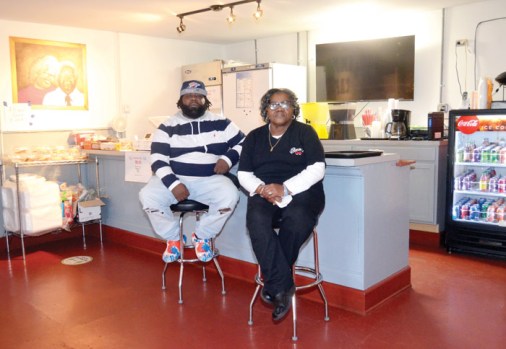 Tyre Hammond, owner of Hamm’s Cafe, sits beside his mother, Debra Pearson, inside his business that opened in September. He chose to return to his hometown to create a business. Shavonne Potts/Salisbury Post 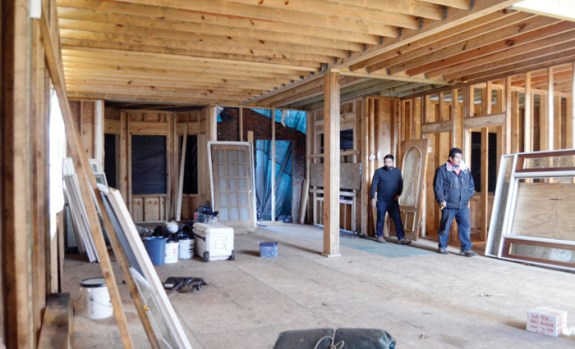 Ursino Figueroa, left, walks through the inside of his home with brother, Antonio., both men have moved from California and purchased homes with their families in the town of East Spencer. The brothers have encouraged other friends and family to move to the town, which has seen an influx of development. Shavonne Potts/Salisbury Post 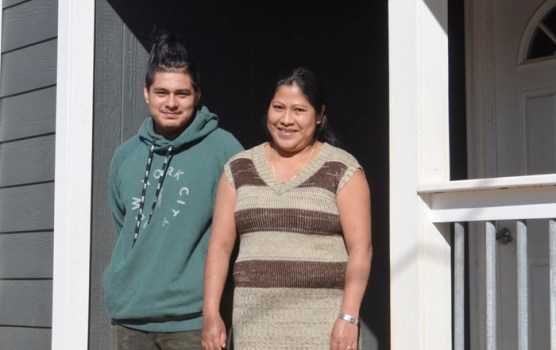 Daniel Salazar Oritz and mother, Adelinda, stand outside their East Spencer that was renovated in part by her husband and friends. The family moved to town from Charlotte after finding housing affordable. They purchased the home in 2017 and began renovating it. They have plans to continue expanding. Shavonne Potts/Salisbury Post 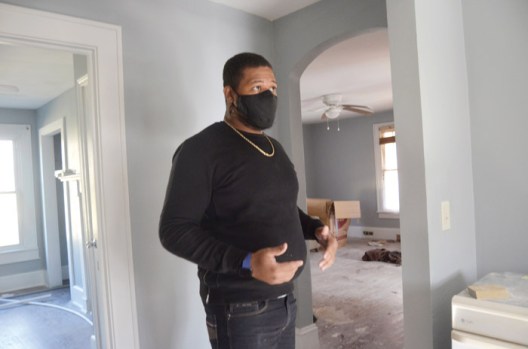 Floyd Peterson stands inside a home that he purchased in 2013 that he’s begun to have renovated on Division Avenue in East Spencer. He has plans to rent the home and build other affordable homes on property next to it. Town officials say they’ve seen an influx of people buying and developing property in town. Shavonne Potts/Salisbury Post 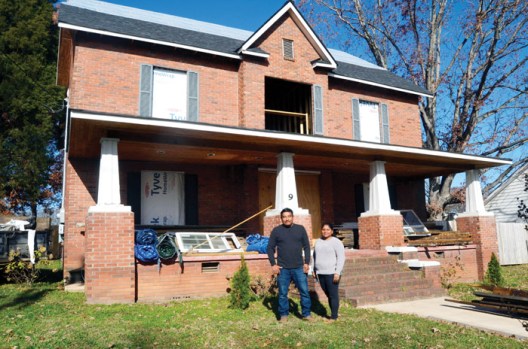 Ursino Figueroa and his wife Monica Hernandez have purchased this home and are taking their time to renovate it. The couple who moved from Charlotte by way of California have also purchased other property including a duplex in the town of East Spencer where town officials say more people are developing property than ever before. Shavonne Potts/Salisbury Post 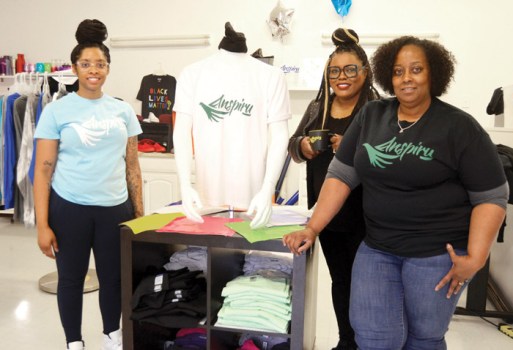 LaChelle Hines, far right, recently opened up Inspiru, a family-owned vinyl printing shop where they create logos and place designs on T-shirts and other apparel. Shown are Hines’ daughter, Ci’Ora Williams and Tara White, who does sales and marketing for the business. The business just opened in East Spencer a month ago. Shavonne Potts/Salisbury Post

EAST SPENCER — In 2013, Floyd Peterson made a cash-purchase of a 1,622 square-foot vacant home in his native East Spencer with plans to renovate and buy future investment properties.

For more than 60 years and three generations, Peterson’s family has owned and operated Kiddie Land Daycare centers in and around East Spencer. The family can now count Peterson Leasing and Rental Properties among its business ventures.

Several years ago, the single-family, three-bedroom home that he purchased sat vacant and hidden by overgrown trees. The 1941 home had holes in the walls, needed to be repainted and had no kitchen sink. It has since undergone a complete renovation, which involved a conversion from gas to electric and a second bathroom. Peterson said he has plans to rent the property.

He also owns the parcels to the left and right of the property. He plans to put affordable housing on those lots. Peterson said his father, Herman, has been a supporter of the project.

“I believe in the culture of East Spencer. I believe that my family — the Peterson and Woods — have good stock at least when it comes to business,” he said.

Peterson is just one part of what the National Association of Realtors recognizes as the biggest housing boom in 14 years. The number of people buying residential properties has soared in cities across the nation thanks to record-low mortgage rates and near-zero interest rates through 2023. But for Peterson and family, the purchase was about looking for something in which to invest their efforts.

“Why not investment property,” he said. “If you’re truly culturally invested, you owe, as a citizen who grew up here and learned from its people and citizens, you owe it back to invest here.”

His goal is to continue purchasing properties in East Spencer and creating homeownership for others.

East Spencer hopes to attract people like Peterson and others looking to build upon the potential and future growth of the town.

Ursino Figueroa and Monica Hernandez are also among those choosing to invest in East Spencer. They purchased a two-story brick home at the corner of West Cauble and South Long streets after they were convinced by Figueroa’s brother, Antonio, who moved to the town in 2010 because of lower prices. But Antonio Figueroa also saw a growing Hispanic population.

Ursino Figueroa and Hernandez moved from Los Angeles to Charlotte in 2001. The prodding from Figueroa’s brother prompted them to look north, specifically setting their sights on a property on Division Avenue and a home in Salisbury. But a Long Street home they drove by frequently kept catching their eye.

The house sat empty for 10 to 15 years, said East Spencer Mayor Barbara Mallett. It needed to be completely gutted. But Ursino Figueroa saw potential in the ability to make repairs and move in his family. He bought the house a year ago and earnestly began repairs about six or seven months ago. Early days were spent cleaning the home and a pool filled with trash and items left behind by squatters.

Ursino Figueroa has plans to move in around May or the summer of 2021.

The family has taken their time to renovate so that they can save money and then make certain repairs. Ursino Figueroa is a roofer and did the work with an assist from friend Gabriel Velazquez, of Gabriel and Sons Framing.

Meanwhile, the Figueroas have attracted others to the town. Adelinda Salazar Ortiz, her husband, and their children moved from Charlotte. The family found a property they liked, bought it in 2017, and slowly began making repairs. Her son, Daniel said the cost of living in Charlotte became too much and the family relocated.

“A lot of friends helped us. We had good friends,” Daniel said.

It took them two years to complete the renovation, and there are plans for more. Daniel said his father has plans to add another bedroom.

“I’m happy I live here. This is a great place here,” he said about East Spencer.

Cecilia Ruiz, her husband and two girls moved from California into their Long Street home nearly two years ago. Antonio Figueroa completed most of the work on the home before the family moved in, Ruiz said.

Ruiz said they have plans to do other renovations to the three-bed, one-bath home.

While families are looking at East Spencer as a good place to plant roots or invest, the city is looking at how their work is affecting the community as a whole.

“Any progress will do two things — obviously increase the tax value for that specific property, but it also can affect tax value of the property around it because of it just being a nicer property in of itself,” said Brandon Emory, who owns Alliance Code Enforcement.

The town hired Emory’s company earlier this year for code enforcement services and specifically to rid the town of dilapidated houses, junk vehicles and other yard debris. His company also assists property owners or potential property owners secure building permits. The largest number of permits he’s issued in a given month was nine — one for a zoning compliance, a couple for demolitions and the rest were for remodeling projects, Emory said.

Emory said he gets inquiries weekly from interested parties who are looking to develop commercial and residential property in town.

“A lot of these properties we have cases open. We’ve got our plate full,” Emory said.

Emory’s work ties back to a 2014 student in which East Spencer found 106 units in town that were in need of or beyond repair. Some homes were torn down by the owners while others had a lien placed on them. The town also created Gateway and Long Street Corridor plans, which were designed to spur development along Long Street as well as near Interstate 85 at Exit 79 and Andrews Street.

East Spencer Mayor Barbara Mallett said people are not just relocating to East Spencer because of the housing prices. There’s also a recognition, she says, about “what we are trying to do in the town of East Spencer, make it like our slogan says — a ‘good place to live.’” She believes it also helps that East Spencer is located in close proximity to Charlotte, Greensboro and other larger cities. She said the hope is that this development will lead to more commercial development.

According to the Rowan County Tax Assessor’s Office, in the last two to three years the town of East Spencer has consistently seen 20 to 35 permits, said Tax Assessor Chip Main.

Among the businesses following new residents and investment is Inspiru, a family-owned vinyl printing and logo design business opened in the former 2 The Tee Barbershop, located at 935 S. Long St.

LaChelle Hines said the business began in 2016 inside their family’s Charlotte home with her first large-scale customer, fellow Rowan County business owner hairstylist Kelly Taylor. Taylor purchased a large order of T-shirts. They opened up shop in East Spencer, in part, to “help build in this community; to bring positivity to this area.”

But LaChelle Hines said she also saw it as an opportunity to use and sell vinyl paper herself instead of needing to purchase it from others.

Hines said the family has been able to start the business with a great support team that includes her church, friends and family. She has plans to incorporate educational opportunities for youth to learn the process of business ownership, print and sip events.

Another recently opened business is Hamm’s Cafe, which is run by first-time business owner Tyre Hammond, a native of East Spencer who bought the former Krider’s Cafe at 813 S. Long St.

Hammond recalled living close enough to the original restaurant to see the smoke when the cooking began. He said it was an institution in those days and it was something he wanted to see make a return to the community. Hammond said he “begged” the owner of the building, John Krider, for nearly five years to let him do something with the building.

The Krider family first opened a cafe in 1946 across from then Dunbar School.

In opening Hamm’s Cafe earlier this year, Hammond said, “The city needed a little heartbeat back.”

Hammond said he hopes that his efforts to jumpstart momentum in East Spencer might eventually encourage others to do the same and open a business in the town. Hammond said he recognizes a lot of people are afraid to venture into East Spencer because of its past, but he feels there’s a resurgence of growth and development.

He fully expects East Spencer to return to a thriving town of years past.