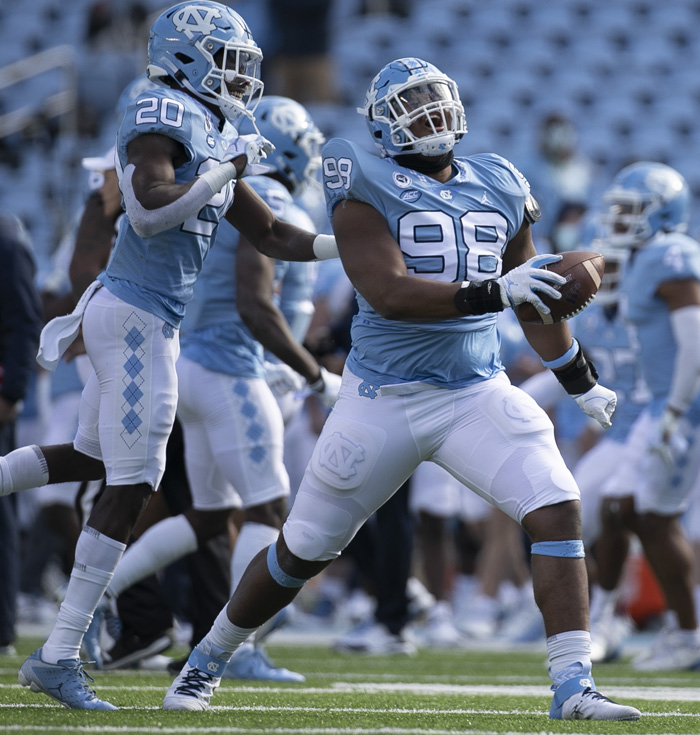 “We did exactly what we needed to do in this game,” North Carolina coach Mack Brown said. “I was not surprised today that they played well.”

Nine different players caught passes from Howell, who was 20 of 23 for 287 yards before sitting out the second half. Those connections included a 22-yard hook-up to Antoine Green, who made his first catch of the season on the first-quarter play, and a 26-yard strike to Dazz Newsome with 49 seconds left in the first half.

The Tar Heels picked up 16 first downs after just 26 snaps on offense. They topped the 40-point mark for the sixth time this year.

Carter ran for first-quarter touchdowns of 17 and 22 yards and then a second-quarter score from 5 yards out. Javonte Williams (3 yards) and D.J. Jones (2 yards) also had touchdown runs.

It was the last home game in Carter’s college career. It came on an unusual Senior Day amid the pandemic.

“The experience, in general, was almost overwhelming,” he said.

Brown said it was the first time in his 32-year career as a head coach that he didn’t put the first-team offense on field for at least one second-half series. Part of that came because of good work in a hurry-up offense for a touchdown in the final minute of the first half.

“I thought we were far enough ahead,” he said. “We tried to get everybody on the field to make sure this was a special day.”

“Obviously, we played a great opponent,” said Western Carolina coach Mark Speir, a graduate of A.L. Brown in Kannapolis. “They’re as an explosive offense as there is in the country. We couldn’t match up with those receivers. Most of the ACC can’t either.”

Paxton Robertson’s 40-yard field goal gave the Catamounts their first first-quarter points of the season, closing the gap to 7-3 at the time. A fake field goal failed in the third quarter. Linebacker Nigel Manns scored on a 42-yard fumble return in the fourth quarter.

Western Carolina: The Catamounts dropped to 0-32 all-time against current members of the Atlantic Coast Conference. This was the third loss – all in a four-year span – to the Tar Heels. The Catamounts played their first game in the month of December since participating in the 1983 NCAA Division I-AA playoffs.

Until Saturday, that was the only other year a Mack Brown-coached team faced Western Carolina, with his Appalachian State team losing that game in the regular season.

North Carolina: More than half of North Carolina’s victories have come against in-state opponents, improving to 4-0 against that group. The others came in ACC play against North Carolina State, Duke and Wake Forest.

The Tar Heels have matched their win total from last year, when they won their final three games.

They’re expecting to be in a bowl following the conclusion of the regular season next week.

Carter and Williams both went over the 900-yard mark for rushing this season. Carter, who had a game-high 73 yards on eight carries, moved to 937 yards on the ground. Williams had just 8 yards on three carries, pushing him to 904 rushing yards this season.

The duo’s production Saturday all came in the first half. Williams has a national-high 19 touchdowns, with 16 on the ground.

LEARN AS YOU GO

The Catamounts didn’t exit this portion of their season without some pluses. “We’ve learned a lot,” Speir said. “We’ve grown a lot.

Playing games during the past month provided a foundation for when the Catamounts resume workouts in about a month.

“It was very productive,” Speir said of competing in games this semester. “I knew it was going to be an opportunity for this football team to grow and develop. … Now I can’t wait because I think we have a chance to have a really good football team as we move forward.”

North Carolina could return to the Top 25 after holding the first spot outside of the rankings this week. The Tar Heels have played seven games this season while holding an AP ranking.

Western Carolina: Feb. 20 at Furman as part of the Southern Conference’s season in the spring semester.

North Carolina: Saturday at Miami for its second game in three weeks against a Top 10 opponent.