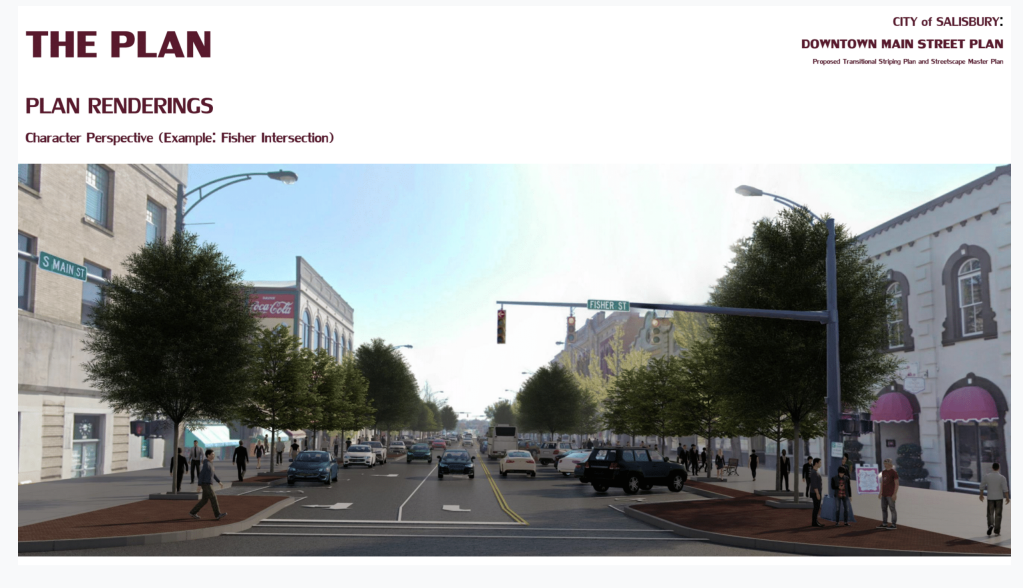 Courtesy of City of Salisbury

SALISBURY — Early next year, locals will have a chance to provide their input and feedback on a Downtown Main Street Plan currently in the works to “bring downtown back to life” for 10 blocks along Main Street.

Salisbury Urban Design Planner Alyssa Nelson and Senior Landscape Architect Dan Lambert, of McAdams Landscape Architecture and Engineering firm, presented city council members on Tuesday with the early renderings of a multi-phased streetscape plan for 10 blocks along Salisbury’s Main Street. One part of the plan involves re-striping, while the other includes a vision for sidewalks and parking improvements.

The area would span from the Monroe Street intersection with South Main Street to the railroad tracks on North Main Street. The purpose of the plan is to make infrastructure improvements for parking, lighting, curbs and gutters and storm system sewers.

The project is still in the stage of receiving community feedback, with a goal of formally hosting feedback opportunities in January, Nelson said.

Additionally, the North Carolina Department of Transportation will be repaving Main Street sometime between March and November of next year.

“The last time Main Street was paved was in 2004, and our next opportunity will not be for another 10 or more years,” Nelson said.

The project began in 2016 when Downtown Salisbury Inc. hosted open-house sessions to collect feedback for downtown improvements. The cooperation with DSI on this project will be helpful when applying for grants, Nelson said.

In 2019, the city formally hired McAdams Landscape Architecture and Engineering. Lambert has worked on street improvement projects in Colorado, Arizona and on Ocean Boulevard in Myrtle Beach, South Carolina, as well as streetscape improvements in Durham, Raleigh and Greensboro.

Lambert outlined the process that took place to get to the current “hybridized dream plan.” The process included public input via online surveys and in-person events, which led to the creation of a “heat map” to assess the most visited areas along the 10-block span. A site analysis and traffic study were then conducted to assess connections between existing parking areas and pedestrian zones in an effort to emphasize the strong points and take a look at what areas need to be stronger, he said.

These studies led to the idea of dropping the four-lane profile with the steep angle for parking that’s currently in place, and moving to a three-lane model with a shallower parking angle. The ideal plan also included pedestrian enhancements that narrow the overall path, while maintaining the functionality of the area.

“It just so happens that peak-hour traffic counts are not requiring a four-lane profile,” Lambert said. “Three lanes actually makes them better, especially with turning movements.”

The firm then developed three options for parking angles, which considered planted islands in the center within areas that don’t need a turn and landscape enhancements and nodes where pedestrians gather. The “dream plan” included reversed-angle parking, 45-degree or 60-degree parking and parallel parking where possible.

However, NCDOT vetoed that plan as they prefer the nose-in parking at 45 degrees and a few mandatory line widths and parking dimensions. Additionally, recent policy changes no longer allow mid-block crossings or planter islands in the center lane.

Following negotiations with NCDOT, the “hybridized dream plan” was then created, Lambert said.

The plan will include left turn lanes throughout the entire corridor, with designated areas for bus stops and unloading zones. As one travels farther north in the corridor, parking will transition from diagonal on both sides to a split of diagonal parking on one side and parallel parking on the other. 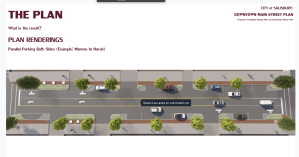 Parallel parking would be on both sides in the area between Monroe Street to Horah Street, with left turn lanes in both directions. Trees, lights and furnishings would exist within the first five feet from the curb, with 15 additional feet of sidewalk. 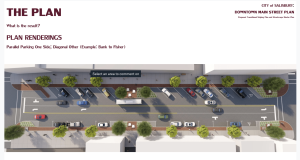 Then when moving to the area between Bank and Fisher streets, parallel parking would be on one side and diagonal parking on the other, with five fewer feet from the curb in that area. 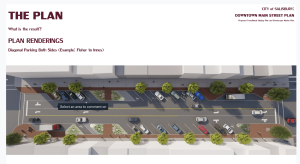 Diagonal parking would be included for both sides from Fisher Street to Innes Street, which allows for a higher volume of parking as there is more activity in this area. The area would include 15-feet sidewalk and furnishing zones.

Moving farther north, from Kerr Street to Cemetery Street, there would be no additional parking. However, the area allows for about 7 feet of room for bike lanes.

“We’re really going to just keep the character of what’s up there, which is street, trees and grass,” Lambert said. “And that just starts to speak to that tapering down from the urban core back to the residential areas to the north.”

Lambert said the depth of the parking spots were based on what’s necessary for a Ford F-150 Quad Cab, which is the second longest vehicle they suspect will be parked in the area.

“Right now, we would all admit that we’ve seen the truck parked in the diagonal space in the 100 block of South Main Street that sticks out into the oncoming traffic lane,” said council member Brian Miller. “If we do a three-lane cross section, we’ll get rid of that.”

Mayor Pro Tem Al Heggins asked about the ability to implement bike lanes in the main square of downtown, but Lambert said the right-of-way narrows with diagonal parking, and the goal is to not eliminate any sidewalk space. He added that parking could transition to parallel in that area, but it would result in less parking availability, which is something many people prioritized in initial public input.

Heggins also asked about parking availability for bikes, and Nelson said more parking spaces for bikes are going to be implemented soon using a grant from the city’s Parks and Rec Department. Lambert said there will be some “bump-out” areas that can be used for additional bike parking space.

Council member David Post expressed concern for NCDOT beginning the repaving project so soon with the pandemic impacting the ability for sufficient public input. Lambert said NCDOT will only be resurfacing and repainting everything that exists currently or based on any interim plan they provide for the future parking plans.

“This is a vision as much as anything of where we’d like for it to be when it’s been fully designed (and) when the funding is available,” Lambert said. “This is a future look. NCDOT doesn’t expect for us to have a finalized design for where the curves will be in the future when they come to do their work next year.”

Mayor Karen Alexander asked about how the plan will impact future economic development projects, such as the Empire Hotel project, as these areas may eventually have a different need for the sidewalk and curb space. She also said the map included too many loading zones in parking areas, and that blocking off existing spots for loading may be a better idea.

But Lambert said those issues were addressed when formulating the plan. The implementation of loading zones are targeted for blocks that don’t have easy alleyway access. Additionally, companies like UPS and Amazon make deliveries all throughout the day, he added.

For the most part, the NCDOT will cover the cost of striping the streets. But Lambert said it’s still too early in the process to estimate the total cost of the project due to some unanswered questions and incomplete construction documents, in addition to “dealing with a very old downtown” with a lot of “under-the-ground surprises” in terms of utilities.

“There’s a lot of investigation that needs to go into it before we can say, legitimately, it’s going to be ‘X’ number of million dollars,” Lambert said.

Salisbury Engineering Director Wendy Brindle said contractors may have to undo some of what NCDOT does next year, but that it will still achieve the goals of the final plan.

“It will, like it has in the past, set up the template for the future project,” Brindle said. “And yes, when we come through with our dream project, whatever that may be, because of the old infrastructure under the street, there will be things that have to be torn up and replaced.”

Council member Tamara Sheffield asked if this plan could allow for more outdoor dining space, and Lambert confirmed there is some space for that, though some areas will have less space to work with based on the parking pattern.

“I think it’s important that people understand that it’s going to be done in phases and that what they’re going to see when DOT is completed is very different than these beautiful renderings with all the brick and everything,” Alexander said.

Miller said having this plan is critical when applying for grants.

“I love this. Actually, the reason I ran for council in the first place was to try to accomplish something just like this,” Miller said. “We got to have this plan. We have to have some sort of master plan in order to qualify for grants. Because the reality that I’ve learned in the last 11 years is we’re not going to be able to pay for this by ourselves. It’s just too expensive. So being able to get grants will enable us to do this.”

The next step of the process will be obtaining public input, which could be a challenge in the era of COVID-19. The firm and city plan to provide an interactive map format using forums like Zoom and SurveyMonkey, along with two large-scale virtual meetings, to allow for public input. Lambert also said it’s worth considering a socially distanced in-person meeting for locals without access to the internet or technology.