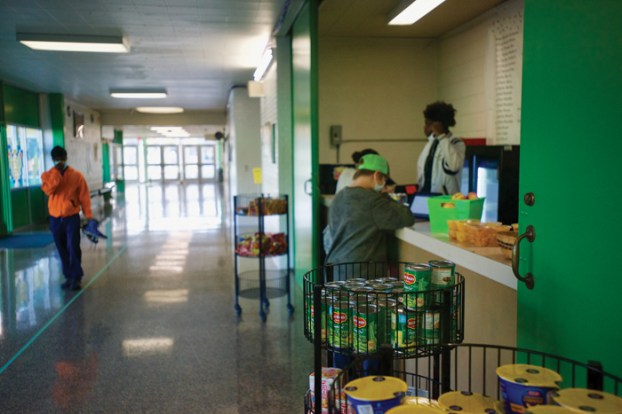 Carl Blankenship/Salisbury Post - North Rowan Senior D.J. Simmons checking out students as they picked up food. The pantry is open and free to anyone student would like to take some items.

A new food pantry, temporarily hosted in the school’s indoor concession stand, is now doling out extra nutrition for students at the end of the school day. Participation in school meal programs drops at higher grade grade levels, but the students are not less hungry. The logistics of getting the food to people who need it is part of the issue, but the other part is the social part of accepting food assistance.

The pantry is free for all students, no questions asked, and participants also receive a draw-string bag in the color of their choice if they take some food. Thirty students stopped by the pantry on their way out during dismissal on Thursday.

The pantry was made possible by a grant from N.C. State applied for by Carol Corken, a board member of local initiatives Bread Riot and Rowan Food and Farm Network. Corken said the grant was awarded through the university’s Community Food Strategies Program and included funding for the pantry, sending produce to corner stores to better serve people in food deserts and to help fund a mobile farmers market to visit food-insecure areas. The funding is about $4,200 split three ways.

Corken originally wanted everything to be healthy food, but settled on including a few items to make sure everyone is fed. Now, the food is a mix of healthy fruits and vegetables and things intended to draw kids in such as noodle cups. Among the mix of items on Thursday were locally grown apples.

Corken said she was inspired by the N.C. No Child Hungry Conference and found out about the drop in participation in feeding programs when students reach high school. She got in touch with North Principal Meredith Williams about a pantry.

Williams said the district talks a lot about empathy for students and families. In particular, Williams said, it’s tough to consider what students who are going through tough times will be able to eat every day.

“I think it brings our entire staff a greater sense of conviction,” Williams said.

Food insecurity is not knowing where your next meal will come from. Williams said it is a form of trauma and increases issues like emotional and learning difficulties as well as behavioral problems.

“It makes the security of the student’s day-to-day life weak,” Williams said.

Williams said the pantry is in the concession stand for now because it is not being used for sporting events and it is already equipped with refrigerators to store produce, but there is space in the school to move it.

Senior Tyshaun Pratt is interning with Communities in Schools and managed the pantry’s opening day as well as promoted it on social media.

“I love helping people, I really do,” Pratt said, adding he sees the need in the school.

Pratt surveyed students to see what they wanted to be stocked in the pantry and how they wanted it to work. There was murmuring in the halls about the pantry as students passed by before the end of the day.

Pratt and fellow senior D.J. Simmons were recording the number of students and supervising the pantry as students picked up food.

Simmons will take on the same internship next semester. He said it impacts him because it is the community he has grown up and played sports with.

“The same people I see out in the neighborhood, now I get to come into school and if they need food or if they want extra food for the house I feel glad and happy I can provide it for them,” Simmons said.

SALISBURY — Goosebumps crept up Josh Barnhardt’s arms as he watched the sign be illuminated for the first time. “It... read more