ROCKWELL — A Halifax County man was found rummaging through a vehicle in a Rockwell neighborhood and in possession of stolen items, the Rowan County Sheriff’s Office said. 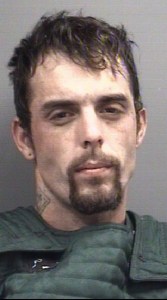 Knox also was charged with a misdemeanor probation violation.

The Sheriff’s Office said a woman arrived at her home on Old Beatty Ford Road Wednesday and saw a man sitting in her car on the driver’s side with the door open. She confronted him and he took off. He was riding a red mountain bike and headed toward nearby woods. He left the bicycle at the wood line.

The woman called authorities to report the incident. A K-9 was called in to search the area, and the tracks led the dog to Ketner Farm Road. Officers received a description of the suspect and found a man walking on Ketner Farm Road that matched. Knox was arrested at the scene. The Sheriff’s Office said he admitted to the break-in and told deputies he was three hours away from home and trying to get back.

Knox told a deputy he stole the bicycle because he was “tired of walking” and that he could point out the house from where he stole it if they drove him to it, the Sheriff’s Office said. The deputy drove Knox to Bev Road in Rockwell — where the owner said he didn’t realize his mountain bike had been missing.

A woman in the 6100 block of Old Beatty Ford Road told deputies she found her car had been gone through but it didn’t appear anything was taken. She said it was too dark to see anything. So she and her husband turned on their floodlights and went to bed. The next day, their daughter, who lives next door, said her vehicle had been ransacked.

A TracFone was taken from one of the vehicles while others on the victim’s property had been ransacked. A friend’s vehicle had a crack on the windshield that was not there previously and the ignition was damaged.

Maj. John Sifford, of the Rowan County Sheriff’s Office, said it appears Knox tried to use a screwdriver to pop the ignition.

Another victim said he went to run errands and saw his Chevrolet pickup door ajar. He noticed the center console was open and coins were stolen from it. The victim told deputies his daughter’s car door, a Chevrolet Malibu, was also open. He said the ignition switch was damaged and the keys were stolen.

Sifford said the suspect was found with a set of keys on him with the name Brittany on it. The keys belonged to the victim of the Chevrolet Malibu.

Knox remains in the Rowan County Detention Center under a $41,000 secured bond.