NC Dolls, Toys and Miniatures Museum gets recognition in Our State magazine 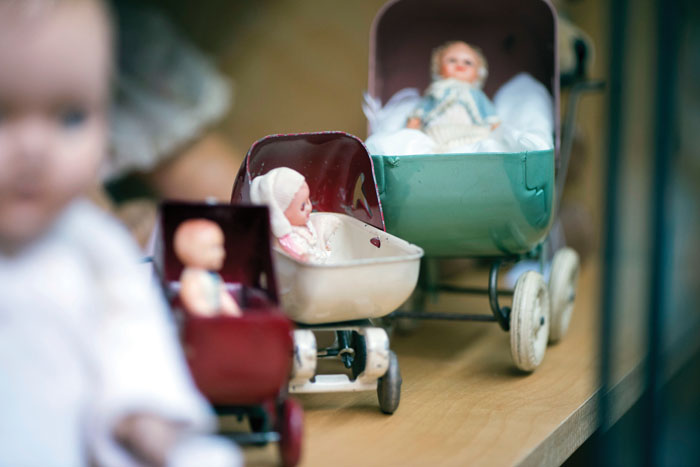 JON C. LAKEY/SALISBURY POST Several accessories like these miniature baby carriages were included in the collection. Beth Nance, founder of the NC Museum of Dolls, toys and miniatures in Spencer, and her volunteers are excited to receive a new collection of dolls and other doll related items from the Ruth Funk Collection. The items were previously part of a over all collection of items at the Foosaner Art Museum in Melbourne, Fla. Spencer,North Carolina,12/13/19.

SPENCER — Two museums in this town of 3,000 people were featured in a directory published by the magazine Our State.

The N.C. Museum of Dolls, Toys and Miniatures was feature on the list titled “35 of North Carolina’s Most Unforgettable Museums” along with the N.C. Transportation Museum, which is across the street.

Dolls, Toys and Miniatures Founder Beth Nance said someone from Our State reached out and told the museum it had been selected before it appeared in the magazine. The mention along with the much larger Transportation Museum was validating as the museum as it enters its ninth year.

“We’re thrilled to be listed,” Nance said, noting the museum has drawn people from all over the country and hosts events that will draw people from more than a half-dozen states.

Nance said the museum has received some interest and donations since the list was published in late October. Last week, the museum received a donation from a woman who drove from St. Augustine, Fla., to donate a French-style doll house which is having some electrical work performed on it before it is put out on display.

“She found us online,” Nance said.

Hansen said she thinks people are drawn by the wide array of the collection, which stretches from the early 1800s to contemporary artisan dolls and toys scale-miniatures.

The museum helps people downsize or takes items when estates are settled. Hansen said people know donations will be used in the collection and preserved or that a new home will be found.

The Our State recognition also comes as the museum is planning a move into Park Plaza, which will double its current space. The museum hopes to move within the next year.

The museum has been open by appointment only due to the COVID-19 pandemic, but anyone interested in looking at the collection can call. Nance said the messages are checked daily and the small board and group of volunteers will set up a time for people to come by.

In a normal year, the exhibits are rotated every three months. Nance said the collection changes so people can come back every quarter and see something new.

The museum has started a new feature on its Facebook page called Toy Time with Mike, featuring board member and Gayle’s Husband, Mike.

Mike is an appraiser and the video series shows him discussing different pieces in the collection.

Transportation Museum Executive Director Kelly Alexander said the museum is always pleased when it is highlighted in Our State.

“The fact that the Toy and Doll Museum is also highlighted just shows that there are great things to see and do here in Spencer and across Rowan County, both for locals and  those from out of town,” Alexander said.

For more information about the N.C. Museum of Dolls, Toys and Miniatures, visit ncmdtm.com, call 704-762-9359 or email info@ncmdtm.com.