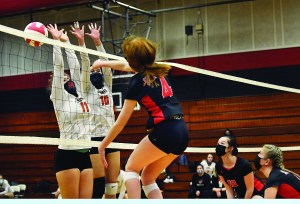 The NCHSAA announced no changes to its modified sports calendar for the 2020-21 school year at Thursday’s press conference.

Most of the announcements made will affect football in the future, starting with the 2021-22 realignment year.

Regular seasons will be reduced from 11 to 10 games with the NCHSAA also eliminating the practice of subdividing the football classifications for the playoffs that has been in place since 2002. Schools will play for full 1A, 2A, 3A and 4A championships in 2021-22. No more 1AA, 2AA, 3AA and 4AA.

Football seasons will start later, no earlier than two days prior to the last Friday in August.

Also announced was a special allocation of $4 million that will get funds to qualifying member schools in a school year of reduced athletic revenues.

The NCHSAA also announced some adjustments to the number of qualifiers for the state golf event.

Wingate’s women lost to UVa-Wise 92-82 on Wednesday despite a big game from Bryanna Troutman (Salisbury).

Returning from knee surgery, Troutman had 19 points and 13 rebounds.

Gadson had 14 points and eight rebounds.

Catawba’s men have made a schedule adjustment and will now play a SAC game at Limestone on Saturday.

Maddie Lawrence had 27 kills for the Hornets and  led in serve-receive.

Brooke Cunningham had six kills, while Mallory Link had five and Riley Peltz had four.

The NPC returns to action on Friday.

A date was announced for the 2020 Rowan County Championships.

The event will be held on Wednesday, Dec. 9, at Dan Nicholas Park.

The competition will be on a new course due to construction at the park.

A.L. Brown’s boys won a meet on Thursday at Frank Liske Park, topping Northwest Cabarrus and Robinson with a perfect score of 15. The Wonders were led by Kevin Stegall, Gabe Blackwelder and Junior Rosas.

Heels fall short to No. 17 Texas in Maui…