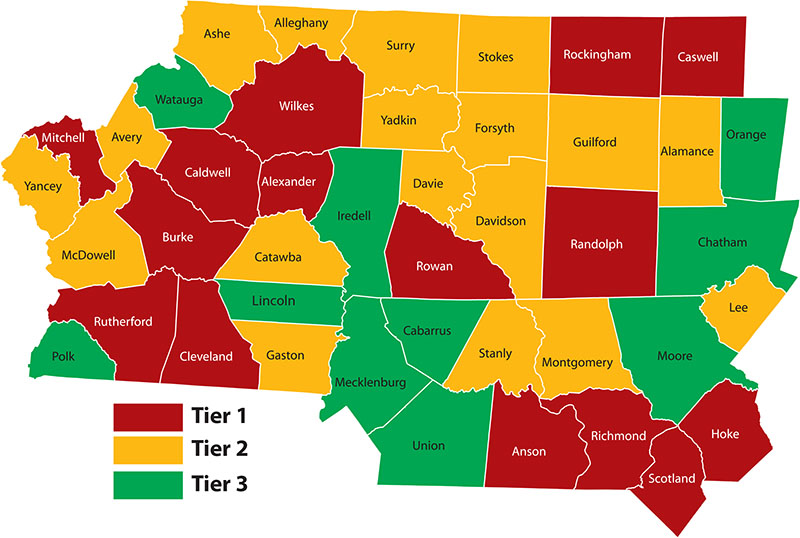 SALISBURY — In what local leaders called both a “gut punch” and a “blessing in disguise,” Rowan County was downgraded to the bottom tier in the North Carolina Department of Commerce’s 2021 county distress rankings released on Monday.

In accordance with state law, the Department of Commerce annually ranks the economic health of each of North Carolina’s counties based on four factors: average unemployment rate, median household income, percentage growth in population and adjusted property tax base per capita. Of North Carolina’s 100 counties, the 20 most prosperous counties are in Tier 3, the next 40 are in Tier 2 and the 40 most distressed counties comprise Tier 1. After dropping from 57th in last year’s ranking to 38th in the 2021 rankings, Rowan County has been downgraded from Tier 2 to Tier 1.

“The bad news is that this is a gut punch, but it’s not surprising based on what we know about the mechanics of the economy,” said Greg Edds, chairman of the Rowan County commissioners.

Edds said the tier downgrade is an indication of the degree to which Rowan County’s economy has been affected by COVID-19. The primary culprit for Rowan County’s regression in the rankings is its unemployment rate, which went from 4.02% and No. 57 in the 2020 rankings to 7% and No. 25 in the 2021 rankings.

Edds compared Rowan County to those adjacent to Charlotte by saying “it’s a tale of two economies.” Many people in Cabarrus County (a Tier 3 county) are able to work from home because they have white collar jobs tied to Charlotte, Edds said. There’s some of that in Rowan County, he said, but the economy is largely still blue collar.

Edds said that the local tourism industry has been devastated by COVID-19 restrictions, with some hotels going from employing dozens of workers to just 12. Tourism attractions, too, have been faced with sharply decreased revenue, he said.

James Meacham, the Rowan Convention and Visitors Bureau CEO, said that he too thought that Rowan County’s economy was more strongly affected than some of its neighbors.

“Given it’s not a mountain or beach community, (Rowan County) does have a very large service, hospitality, leisure, entertainment, recreation sector that disproportionately has been hit much harder than a software or a stay-at-home type business operation or financial services or other operations that you can do from your home,” Meacham said. “These businesses and our entrepreneurs are largely made up of brick-and-mortar businesses, breweries, restaurants, wineries and attractions.”

Rowan County is one of 11 that was bumped down to a more distressed tier in the 2021 rankings. Davie County was also demoted, moving from Tier 3 to Tier 2. Iredell and Cabarrus remain Tier 3 counties while Davidson and Stanly are still in Tier 2.

Besides seeing its unemployment rate ranking drop, Rowan County’s 2021 rankings were largely similar to that of the year prior. The county once again came in at No. 48 in population growth, dropped only one place from 48 to 47 in adjusted property tax base per capita and saw its median household income only slide four places, from 56 to 52.

Meacham said that while it was “unfortunate” for Rowan County to have the downgraded distress ranking, it will be a “blessing in disguise” because it will allow the county to receive priority status for state grants and programs designed to catalyze economic growth.

“It will create the maximum incentivize capacity and grant opportunity to partner with the state and order to spur economic development and job creation and business growth,” Mecham said. “It’s unfortunate to have that distress ranking, but I think it’s entirely driven by, in my opinion, the impact of the COVID-19 pandemic, but it can help accelerate us out of it when there are opportunities available to us.”

Rod Crider, president of the Rowan Economic Development Commission, said he plans on taking advantage of the “opportunity” presented by the new tier rankings when it comes to expanding existing businesses and recruiting new ones.

Crider said that he’s heard that some prospective companies tell site selectors they are looking for Tier 1 or Tier 2 counties specifically.

“I think it’s a positive in many ways,” Crider said. “We need to take advantage of this for the next 12 months until the next rankings come out and try to maximize as many resources as are available to us possible so we can further bolster our economic development efforts, whether it be broadband or additional incentives. I’ll be letting the site selection consultants know we are a Tier 1 county.”

Crider said that being a Tier 1 county will allow Rowan to take better advantage of the One North Carolina Fund, known as “OneNC.” OneNC is a discretionary cash-grant program administered by the NC Department of Commerce that allows Gov. Roy Cooper to respond quickly to competitive job-creation projects.

As a Tier 1 county, Rowan will now only have to match one dollar in county spending for every three dollars provided by OneNC when it comes to incentivizing an economic development opportunity. Tier 3 counties have to match dollar for dollar.

Sen. Carl Ford, a Republican who represents Rowan and Stanly counties in the state Senate, said that the new tier designation is a “catch 22” as it helps with more governmental funding and financial support, but it could result in fewer private dollars flowing into Rowan as companies may consider a county’s tier status when making decisions about their location.

“To me, it’s not that big of a deal. It’s certainly temporary because we have traditionally had a low unemployment rate,” Crider said. “I don’t think it portends any long term trend that we are becoming distressed because, actually, before this year, we were slowly rising.”