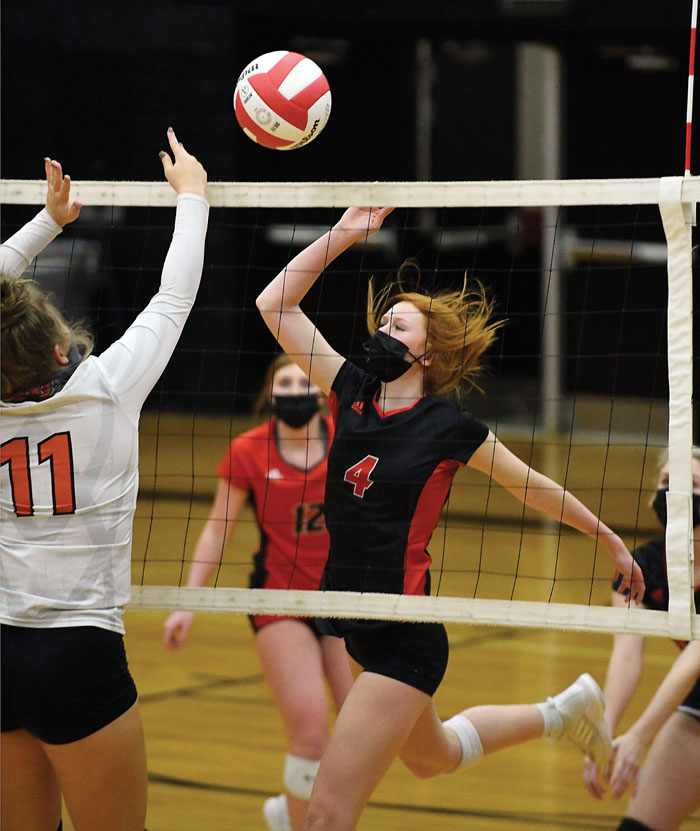 LANDIS — Since moving from 3A to 2A and joining the Central Carolina Conference, South Rowan’s volleyball program has won 52 of 57 matches.

South’s 25th straight regular-season CCC victory occurred on Tuesday at home against North Davidson — 25-11, 25-18 and 25-14 — but that doesn’t mean the Raiders don’t get hollered at occasionally.

“We got yelled at by the coaches tonight between the second and third sets,” senior middle hitter Anna Rymer reported. “We had a somewhat easy win in the first set so we let our energy get a little lower for the second one. But we picked it up. We elevated again for the third set.”

It’s easy for energy to drop for masked players in a silent gym, where the majority of the noise is being made by players on the opposing team.

“We get everyone’s best shot and we know they’ve got nothing to lose,” Rymer said. “We know what’s coming. Everyone wants to beat us in this league, and our coaches constantly talk about that and remind us of that.”

The important thing was that that the Raiders (4-0, 3-0) got their energy back and finished strong.

“Not our best performance,” South head coach Jenna Horne said. “We’ve obviously got some things to work on, but we did do some good things and we’ll get better.”

Rymer, still uncommitted, couldn’t have been much better. She had 27 kills, which is a crazy number for a three-set match.

Rymer had five of those kills right away as South jumped to a 10-2 lead in the first set and cruised.

But the Black Knights (1-2, 1-2) got good play from Emma Rogers and Dylan Freedle and were a much tougher opponent in the second set. It was 5-all early, and even after South spurted to 10-5, North Davidson refused to get blown out.

North Davidson played so much better in the second set that there was some reason to think the third set might be exciting, but Rymer ended the suspense. She had five quick kills as South jumped out 9-4 and headed for the sweep.

“I liked what I saw in the third set,” Horne said. “We came out and took the momentum back. We played more as a team, got sets for everyone. Then we found a groove.”

South’s primary setter is another Rymer sibling, Leah, a freshman. She handed out 31 assists.

On the defensive side of things, South got 23 digs from libero Payton Black. 16 each from Kali Nelson and Cameron Black and 14 from Anna Rymer.

The challenge for the Raiders is going to be getting non-Rymer kills to keep the attack balanced and to keep opponents guessing. Cameron Black had 12 kills against the Black Knights, while Kendall Rockstad contributed six.

“Cameron Black is 100 times better than last year, better technique, smarter, more power, jumping higher,” Anna Rymer said. “Payton Black is a great libero, always covering for me, and Leah (Rymer) is doing a great job for a freshman as far as running our offense. We’ve got a lot of girls that have improved, and they’re fun to play with.”

South was a school-record 28-2 last season.

That massive number of wins can’t be duplicated in a season shortened dramatically by COVID-19, but the Raiders hope to minimize the losses.

Jordan jumped at chance to get Hayward to join…