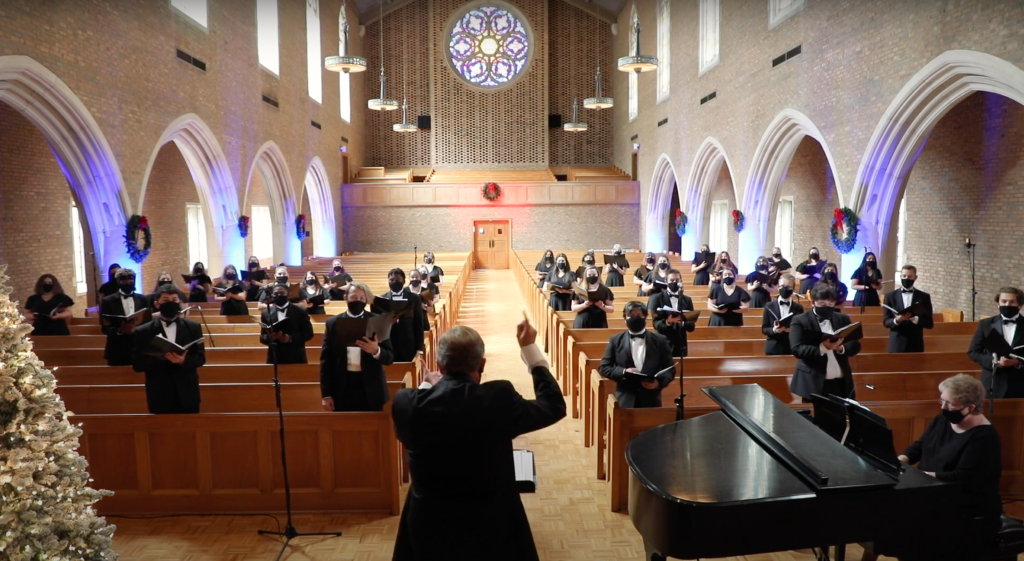 Photo submitted - The choir performs during the recording session.

SALISBURY — A Catawba College concert tradition of more than three decades will go on this year, but people will be able to watch it from their homes.

Catawba Director of Vocal and Choral Studies Phillip Burgess said the longstanding Service of Lessons and Carols will be virtual this year because of circumstances stemming from the COVID-19 pandemic. There were a few issues: the college cannot host an auditorium full of people and singers would have to be spaced apart. Students also went home early this semester, leaving for Thanksgiving and not returning to campus until Jan. 25.

Burgess said the service was recorded over two days and wrapped up on Sept. 18, just in case there was a spike of COVID-19 cases on campus. The college did see a gradually rising number of active cases during the semester, but it never had to close.

For the program, Catawba’s chapel was decorated as it would look in a normal year, but the students were spaced out through the pews and there were no congregational hymns.

Burgess said students were excited to get to do the service. It was important to the seniors particularly, he said, since they got to participate one more time before they graduate.

“The students bought into it wholeheartedly,” he said.

Burgess said the choir continued to record pieces every week after the service recording was finished.

“They have been singing Christmas songs since August,” Burgess said. “They are probably tired of them.”

In past years there would be an audio recording, but this year was a bigger production because the college wanted a high-quality video version to show. Every time the choir would record a new song, the chapel had to be redecorated. They started using artificial arrangements that could be set up and taken down on short notice.

“It was mixed beautifully and the audio editing is just superb,” Burgess said.

A draft of the service made available to the Post shows multiple camera angles and full lighting setup, cutting between speakers, small ensembles and the full choir. All of the singers wore masks.

It was difficult to bring a choir together in the first place. Burgess said the American Choral Directors Association published a 106-page document on singing safely during the pandemic. He said he studied that guidance and decided to go ahead with face-to-face singing.

Senior music education major Alana Cooper said it was kind of strange not having the large audience that normally attends, but she is thankful to still get to perform.

Singing with a mask on has been a challenge. Cooper said it is harder to breathe and they muffle voices so singers have to enunciate as much as possible to be understood.

“It’s been a good experience, but I’m really over it if I’m being honest,” Cooper said.

The students were required to follow all the protocols and self-monitor daily, even taking precautions like not passing music around. Burgess said it was a success and any infections, as reported by many other education institutions, originated off-campus.

“We did something that no one thought could be done,” Burgess said.

The service will first stream at 7 p.m. on Dec. 13, and then be available on the college’s YouTube channel.