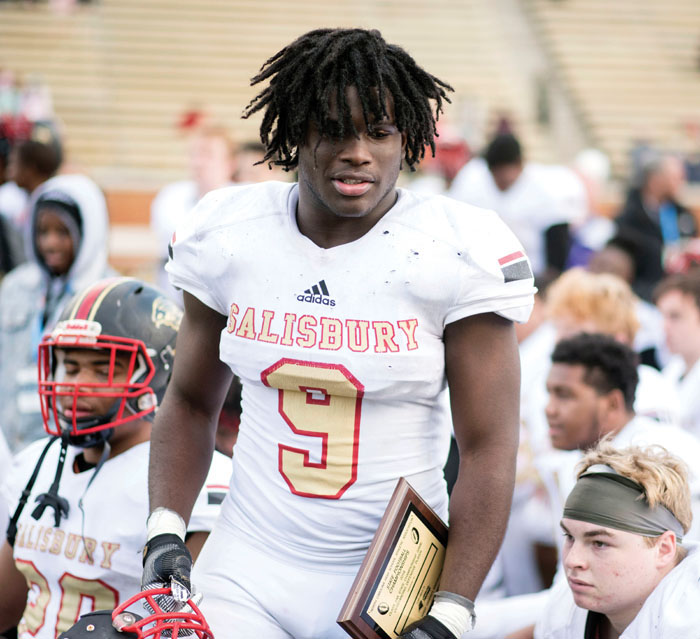 SALISBURY — For Salisbury senior defensive lineman Isaiah “Zae” Clay, these are the best and worst of times.

There aren’t many 2A players in the state that Salisbury head football coach Brian Hinson would trade Clay for, but December is here and Clay owns just one college offer. That’s from Division III Averett, in Danville, Va., and D-III schools can only provide academic scholarships.

Clay has two things working overtime against him. There’s his modest height of 5-foot-11 and there’s COVID-19, which delayed the NCHSAA season and has discombobulated the recruiting process for the Class of 2021. Neither of those obstacles fall on the list of things Clay can control.

The 230-pound Clay has gotten used to standing under 6 feet in a sport that is constantly seeking taller and longer.

“I know my height is a downfall as far as recruiting, but it’s something I’ve learned to use to my advantage,” Clay said. “I understand leverage and I play lower than my opponents. I don’t get discouraged. I’ll keep my head up.”

Clay is the son of a single mother who came to the U.S. from Liberia. She works multiple jobs. On Saturday, Clay headed to his own part-time job at McDonald’s.

He’s someone for whom a football scholarship would be an obvious life-changer, but he may need a senior season to land that scholarship.

“I know there are some D-II coaches who really like him as a defensive end, but the recruiting process right now, I just don’t know,” Hinson said. “Colleges are losing a lot of revenue. How much are they going to be able to give recruits? How much can they spend? There are so many questions that we don’t normally have.”

Football started for Clay when he was 7 or 8. He learned the basics with the Salisbury 49ers youth program.

He developed into something of a middle school legend for the Knox Trojans as a basketball player and as a two-way football player at fullback and middle linebacker. Clay remembers scoring five touchdowns in a game, some on both sides of the ball.

“That was one of the best years of my life,” Clay said. “I got pretty good at stripping the ball from a running back and just taking off with it.”

The story goes that Clay’s mother wasn’t sure if he had any serious football potential, or not, so she sent a friend, who had college playing experience, to watch him. He returned with two-thumbs-up scouting report. “Your kid can play,” he assured her.

When he arrived at Salisbury High, there was a position switch waiting for Clay.

“Well, we had plenty of linebackers and running backs,” Clay said. “So they put me on the defensive line. Everything was new to me, it was a very big adjustment, but I took the challenge and I learned. The coaches told me they were putting me where I was needed the most.”

He’s been a three-year starter for the Hornets as a DL. He’s become a perennial all-county and all-conference player.

The job of interior defensive linemen is to make the linebackers look good, to free them to make the tackles. Interior linemen take on blockers and either hold their ground or, if they’re really strong and explosive like Clay, they get some push into the backfield.

“Zae is usually going to have a mismatch,” Hinson said.

While Clay’s position isn’t designed to pile up stats, there are times when he gets them anyway. In Salisbury’s 26-0 win against Carson last fall, Clay played just 37 snaps, but was credited with 11.5 tackles, 3.5 sacks and another tackle for loss. He had six quarterback pressures.

Salisbury has a player in the junior class, Jalon Walker, who is 6-foot-3, a prototype linebacker, and one of the most highly recruited players in the country. Walker’s height gives him the higher ceiling, but as high school athletes, Clay and Walker are equally destructive.

“With Jalon, you know he’s a player as soon as he walks out there for warmups because he just has that look,” Hinson said. “With Zae, you may not know he’s a player until the game starts. But then he makes plays. Not many people have the motor that Zae plays with. His first step is really quick and it makes him so hard to block.”

Clay is close to the ideal student-athlete.

He even practices hard.

“Being sloppy in practice can lead to sloppiness in games,” said Clay, sounding like a coach. “I try to go hard all the time. We’re working out now three times a week, and on the days when we don’t have a school workout, I’ll run on my own. I’m always moving around.”

Clay’s first appearance in the pages of the Post had nothing to do with sports. He made the All-A Honor Roll at Isenberg Elementary as a second-grader.

He is still is a solid student and he has the manners and the smile to go with it. He’s never in trouble in class.

“All in all, just a pretty awesome kid,” Hinson said.

Clay was asked to speak to middle school students last year and made a positive impact in his first unofficial speaking engagement.

“I told them it all has to start for them in the classroom,” Clay said. “I told them to get good grades, to put grades ahead of sports, and not to be one of the bad kids. I told them to listen to the teachers and to do their work.”

“I told the CCC coaches that I played at a 1A high school, but we had a conference lineman of the year award,” Hinson said. “It’s something that was needed. You have to show the big boys some love. The coaches in our league voted unanimously to add the award, and then the ADs got behind it as well.”

The award meant a great deal to Clay.

“I was happy for my teammates and coaches who believed in me,” Clay said. “And it was good to know I was being noticed, that all the work I’ve put in is paying off.”

Clay turned in a dominant performance in the first round of the state playoffs against Mount Pleasant (eight tackles, two sacks) and kept it going throughout the Hornets’ tremendous post-season run that included three road victories.

Salisbury’s season ended in the 2AA state championship game at Wake Forest with a 34-0 smackdown by Shelby. That was on Dec. 14, nearly a year ago.

But even in that loss, Clay impressed a lot of people. He was the Hornets’ most impactful player, recording three sacks. He accepted the hardware as the Hornets’ defensive player of the game.

“I’d never been in a game that big, but I just went out there to play football like I always do and got after it,” Clay said.

Clay figured to take momentum from that impressive outing into the fall, but the high school season was pushed back to February.

And even winter/spring football is no sure thing at this point.

“I’m not going to lie about it, it’s been tough with our season pushed back and possible offers being pushed back, but I do my best to stay focused every day,” Clay said. “If you keep working, you never know what might happen.”

Hinson keeps his fingers crossed for the players on a potentially dominant team, especially the seniors.

Salisbury is scheduled to open the season with West Rowan, a game the whole county has been waiting on, for several years.

“What a great way that would be to open things up,” Hinson said. “But I worry every day. If we don’t get to play, what happens to a kid like Zae?”