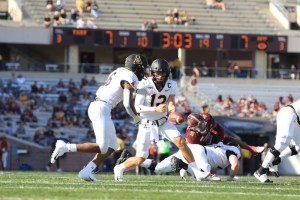 The rematch of last year’s Sun Belt Championship opponents was originally scheduled for Oct. 7 before being moved to Dec. 4 (with a previously scheduled 7 p.m. kickoff on ESPN2).

The Mountaineers are 35-10 all-time in games on ESPN, ESPN2 or ESPNU, including a 4-1 mark this year.

Scheduled to be App State’s final home game of the season, this year’s senior class will be recognized prior to kickoff.

This week’s matchup is believed to be the latest kickoff time in Kidd Brewer Stadium history and only the second post-Thanksgiving home game in Boone with a kickoff time of 8 p.m. or later. On Dec. 7, 2007, with a Friday night kickoff time of 8 p.m., App State won 55-35 against Richmond in an FCS semifinal as Armanti Edwards rushed for 313 yards with a listed temperature of 42 degrees.

The current forecast for Friday night calls for a low of 29 degrees and possible snow flurries.

No. 20 Louisiana, which has clinched the Sun Belt West division for the third straight year, represents the second nationally ranked opponent for App State this year. This is the first time that the Mountaineers will host a top-25 Sun Belt team, and it’s the first year that App State has faced multiple ranked FBS opponents (at the time of the matchup) since 2016.