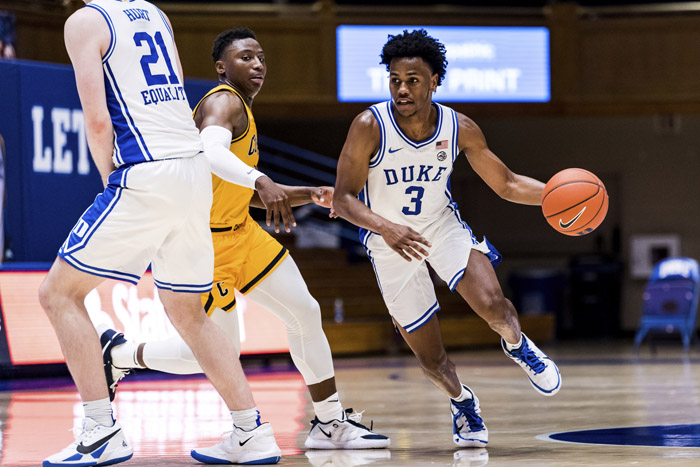 DURHAM — Freshman Jalen Johnson had 19 points, 19 rebounds and four blocks to help No. 9 Duke overcome a turnover-filled performance and beat Coppin State 81-71 in Saturday’s delayed season opener for both teams.

The 6-foot-9 Johnson made all eight of his shots from the field, including a 3-pointer, and both of his free throws while also tallying five assists. Fellow rookie DJ Steward scored 24 points for the Blue Devils, including a key 3-pointer with 2:02 left that helped keep Duke in control during an unexpectedly tight finish.

Duke was playing without its rowdy fans in the famously hostile Cameron Indoor Stadium due to the coronavirus pandemic. The Blue Devils shot 53% but committed 22 turnovers to give the Eagles plenty of extra chances, with Duke coach Mike Krzyzewski saying simply: “It’s tough to explain some of those turnovers.”

“There was a lot of game pressure on our team today,” Krzyzewski said. “It’s such an unusual atmosphere.”

DeJuan Clayton and Anthony Tarke each scored 22 points to lead the Eagles, who shot 33% but made 10 3-pointers — seven coming after halftime — to keep the pressure on Duke the entire second half. Coppin State, picked fourth in the Mid-Eastern Athletic Conference’s Northern Division, scored 28 points off turnovers.

“We just wanted to give our guards the freedom to go out there and make plays,” Coppin State coach Juan Dixon said, adding: “If our guys can play against this top-10 team like this, we feel as though we can compete with any team in the country.”

The Blue Devils were set to face Gardner-Webb on Wednesday before  issues within the Runnin’ Bulldogs program surfaced.

This was the first chance to see how Duke’s lineup would look after the departures of prominent players like point guard Tre Jones and big man Vernon Carey Jr. Duke helped offset the turnover problem and a bad day at the foul line (4 for 10) by finishing with a 50-31 rebounding advantage.

The Blue Devils next host No. 13 Michigan State on Tuesday in the Champions Classic.