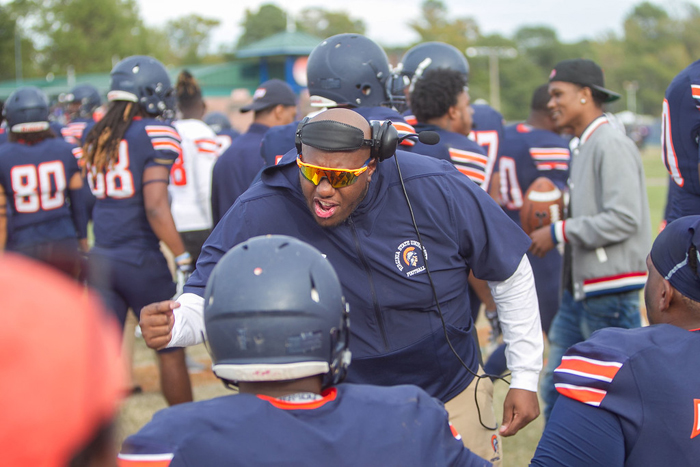 A 32-year-old who graduated from A.L. Brown High in 2006 and played collegiately at Virginia Union, Watson is considered a rising star in the CIAA coaching ranks. He may have a future as a Division II head coach or as an NFL assistant.

“I’m just a guy from Kannapolis, so I’m proud of how far I’ve come,” Watson said.

Watson believes continued advancement in college football is the most likely track for him, but he did get some exposure to the NFL when he was selected to participate in a two-day coaching summit for highly regarded Black coaches back in June.

“I worked with Jacksonville Jaguars coaches, and they have referred me to more people and doors continue to open through the coaching network,” Watson said. “I’m proud to coach at an HBCU school, but I don’t think of myself as an HBCU coach or as a Black coach. I think of myself as a football coach — period.”

Football began for Watson as a 5-year-old in Kannapolis. His father had played the game, so he got Watson involved young.

“I have strong memories of following the 1997 and 1998 A.L. Brown teams, those Nick Maddox teams, when I was a young kid,” Watson said. “My father took me on the road trips to see those teams play and I couldn’t help but grow up dreaming about being a Wonder.”

Watson was as highly regarded as a baseball slugger as he was as a football lineman as a youngster.

“When I got to A.L. Brown, I played baseball with talented guys like Brett Bartles, Garrett Sherrill and Ryan Query,” Watson said.

Watching Bartles sock baseballs helped Watson realize that his future was brighter in football, but he enjoyed every second he spent on the baseball diamond or in the dugout.

“Those baseball guys were my brothers, same as football,” Watson said. “Our baseball rivalry with Northwest Cabarrus in those days was as strong in its own way as the A.L. Brown-Concord football rivalry. And I got to play baseball for Coach Empsy Thompson. No one’s more of a stand-up guy than he is. He understood kids and he understood Kannapolis.  You could talk to him about anything.”

“If practice started off bad, he might send you back to the locker room and tell you to start all over,” Watson said. “Coach Massey could be tough, but we knew he wanted the best for us.”

Watson’s biggest influences on football fields came from the line coaches, men such as Todd Hagler and Shon Galloway. They drove him in practice and in the weight room.

“They pushed us to the limit and past what we thought our limits were,” Watson said. “The thing about the A.L. Brown program is that you were a completely different person when you come into it as a freshman and when you left as a senior. It was night and day. There was a transformation. College guys would come back and work out with us. That’s how tough the workouts were and how hard the coaches pushed us.”

Most of his prized high school memories are from his senior season in the fall of 2005 when the Wonders were South Piedmont Conference champs. He remembers the epic win over Concord, the amazing two-overtime playoff win against T.C. Roberson and the victory over undefeated West Rowan in the third round of the playoffs when quarterback Sean Fortson, one of his best friends, had the game of his life. The Wonders could run the ball behind linemen such as Watson — 276 rushing yards against West Rowan; 302 against T.C. Roberson.

“One game that no one talks about much is Parkland,” Watson said. “That was the first round of the playoffs and a lot of people had Parkland coming to our stadium and beating us. They were wrong. We beat them bad. We were up 34-0 after three quarters.”

Charlotte Catholic ended that season for the Wonders in the fourth round. Catholic did that frequently in that era.

“I remember that (Catholic back) Ben Herlocker was good, and we finished 13-2,” Watson said. “Catholic had a great system. They were completely different on offense from anyone else we played. Four days was not enough time to prepare for what they did.”

Watson was a big guy, 6-foot-2 and 290 pounds, but he was only moderately recruited. After graduation, he headed to Louisburg Junior College.

That’s where Virginia Union University, a Division II school that competes in the CIAA, spotted him.

“Fortunately, they were looking for a center that day, and I was blessed to be in the right place at the right time,” Watson said. “My parents were both from Virginia, so I was comfortable going to play in Virginia. And it was a chance to reunite with (Northwest Cabarrus grad) Tre Hemphill. He was one of my best friends growing up, and he was a linebacker at Virginia Union.”

Watson played on some winning Virginia Union squads. He anchored offensive lines that paved the way for rushing records.

“We had a quarterback from North Carolina (East Montgomery grad Lamar Little) who was outstanding,” Watson said. “I played center and guard. My first year at Virginia Union we played for the CIAA championship and we lost in two overtimes. Then we played in the Pioneer Bowl at Benedict’s new stadium and we lost on a Hail Mary.”

Watson was smart enough to see that there were players who were more talented than he was.

That’s when he started preparing for a coaching career.

“I realized that football wasn’t going to be a pro thing for me, so I started really learning the game, studying the game inside and out,” Watson said. “I was always one of those guys who could see things before they happened. I was one of those guys who knew not only what his own job was on a play, but what everyone else was supposed to be doing.”

Loren Johnson, a former Virginia Tech defensive back who became a high school coaching legend in Virginia, gave Watson a chance to join his staff at wildly successful Highland Springs High in the Richnond area.

“Loren gave me a chance, took me under his wing, gave me a lot of responsbility,” Watson said. ‘But then one day I got a call from Coach Mark James at Virginia Union and he offered me a position on his staff. I felt deeply loyal to Coach Johnson and Highland Springs, but I also felt loyalty to Virginia Union, the school I’d graduated from, the school where I met my wife and my best friends, the school that I owed everything to. That was the hardest decision I’ve ever had to make, but I made the move to Virginia Union. My first year there we went to the D-II playoffs for the first time in 25 years.”

College football coaching isn’t the most stable profession. Virginia Union decided to shake things up shortly after the 2017 season and fired James. That meant staff members were also searching for new employment.

“I felt for a few days like everything had been taken away from me, but I was only out of work for three weeks,” Watson said. “Virginia State hired me to coach tight ends and handle strength and conditioning.”

Virginia State and Virginia Union are only 20-something miles apart, hard rivals, sort of a college version of A.L. Brown-Concord.

“I remember the first Virginia Union-Virginia State my wife came to — she’s a Virginia Union grad like me — and she wanted to know which side she should sit on,” Watson said with a laugh. “I told her that she’d better be sitting on the side that was paying our mortgage.”

Watson has made himself valuable at Virginia State.

“I’m good at paper work, good at computer work,” Watson said. “Some of the best advice I ever got was to be able to do what a lot of others can’t do or don’t want to do.”

COVID-19 has silenced Virginia State and CIAA football, not just for the fall season, but for the entire school year. That was a harsh blow, but Watson is making the best of having more free time than he ever dreamed of. He spends most of it with his wife and his 1-year-old son Trumaine Jr. Another baby is on the way.

“This is the first year since I was 5  that I haven’t been involved with football from July to December,” Watson said. “I’ve never missed a football season — until this one.”

When football does return, he’ll be ready to do big things for Virginia State.

That could lead to even bigger opportunities down the line.

“A coach advised me once to be good no matter where your feet are,” Watson said. “Be good, and they’ll find you.”