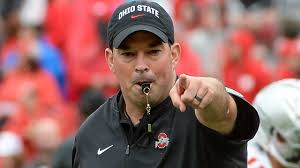 No. 3 Ohio State’s game at Illinois on Saturday has been canceled because the Buckeyes have had a spike of COVID-19 cases this week, leaving the the Big Ten’s best team precariously close to being ineligible to play for the conference title.

The team did not fly to Illinois as scheduled Friday night so additional COVID-19 testing could be conducted in Columbus, Ohio. The revised plan was to fly up Saturday morning for a noon ET kickoff.

After returning additional positive tests, Ohio State announced the game was called. The school did not reveal how many members of the program had tested positive as has been its policy all year.

Ohio State paused all activities for the football team.

“We have continued to experience an increase in positive tests over the course of this week,” Ohio State athletic director Gene Smith said in a statement. “The health, safety and well-being of our student-athlete is our main concern, and our decisions on their welfare will continue to be guided by our medical staff.”

This is the second game of the Big Ten season Ohio State has had canceled. The first came after an outbreak at Maryland forced a postponement earlier this month. Despite playing only four games so far, the Buckeyes (4-0) were fourth in the first College Football Playoff rankings released earlier this week.

Big Ten rules require teams to play at least six game in this abbreviated season to be eligible to play in the conference championship game. The minimum could drop if the average number of games played by all Big Ten teams falls below six (an average above 5.0 will be rounded up to six).

In that case the minimum number of games required to be eligible for the championship game would be two fewer than the average.

The Big Ten has 18 games remaining, including four Saturday. More than half of those games would have to be canceled for the minimum number of games to qualify for conference championship to drop below six.

Ohio State has only two game remaining on its regular-season schedule: at Michigan State on Dec. 5 and home against Michigan on Dec. 12. The Big Ten championship game is Dec. 19.

The Big Ten started its season the weekend of Oct. 24 and scheduled no open dates for makeups in its eight-week, regular-season schedule.

No. 18 Wisconsin already has lost three games after Minnesota canceled earlier this week because of a COVID-19 outbreak. That will leave the Badgers, the Big Ten West favorites, with only five regular-season games at most.

Day is the 19th major-college football coach this year to publicly acknowledge testing positive for the virus, including Alabama’s Nick Saban earlier this week.

Also on Friday, the Southeastern Conference announced a series of scheduling moves to make up games on Dec. 5 that had been previously postponed, including Alabama at LSU.

The Tide and Tigers were scheduled to play on Nov. 14, but LSU could not because of a lack of players available due to COVID-19.

Arkansas at Missouri will also be made up on Dec. 5. The Razorbacks were forced to postpone their game with the Tigers this week. Missouri instead was scheduled to play a makeup game with Vanderbilt.

Alabama at Arkansas, Mississippi at LSU and Missouri at Mississippi State still need to be rescheduled.

Alabama at Arkansas could be played on Dec. 12, the week before the SEC championship game.

LSU already has a game with Florida scheduled for Dec. 12, but it could play Ole Miss on the day of the SEC championship game, which the conference is using to make up regular-season games not involving the division winners.

Across college football, 16 of the 58 games originally scheduled for this week have been postponed or canceled, though some replacements have been added.

Utah will visit Washington after its scheduled Pac-12 opponents could not play, and San Diego State will play at Colorado in a nonconference game after Southern California could not play the Buffaloes.