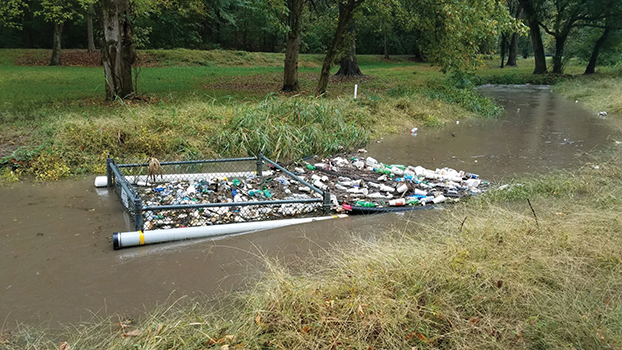 Even though Oscar is composed of spare pieces and scraps from other projects, the device is effective at preventing garbage from littering local waterways. Photo submitted.

Quotes of the Week: ‘All of the trash is pretty remarkable’

“All of the trash is pretty remarkable, the amount of trash it actually collects. As we cleaned it out, we were collecting about four 96-gallon trash rollout cans full of trash.”

“We really wanted diversity in not only cultures but in musical performers. We have Mariachi bands, we have drag queens on South Main, we have a live Nativity.”

“No joke, about 70% of the trees in the Catawba Preserve will be dead in the next two or three years.”

— Jay Bolin, a Catawba College professor who supervised student research at the Stanback Ecological Preserve on the school’s campus.

“Just having one down month, when you’re a small business can really domino into another.”

“I’m reaching people in India and across the country. I had a patient reach out and say, ‘Can you see me? I’m in New York.’ I can’t because I don’t have a New York license, but it’s really cool to see the impact.”

— Melanie Denton Dombrowski, who’s the owner of Salisbury Eyecare and Eyewear and embraced Youtube as a way to connect with people.

“Those chemicals kill every germ within 30 seconds. It takes a few minutes to dry, but then you’re good to go.”

— Stella Anderson, secretary for the State Board of Elections speaking about a Nov. 12 deadline for absentee ballots postmarked by election day.

“If I didn’t have people at home who love and support me, including a mother still in Virginia who prays for me every day, I would not be successful as the chief for Salisbury.”

When Gov. Roy Cooper on Monday began a news conference, people were already preparing themselves for the news that the... read more