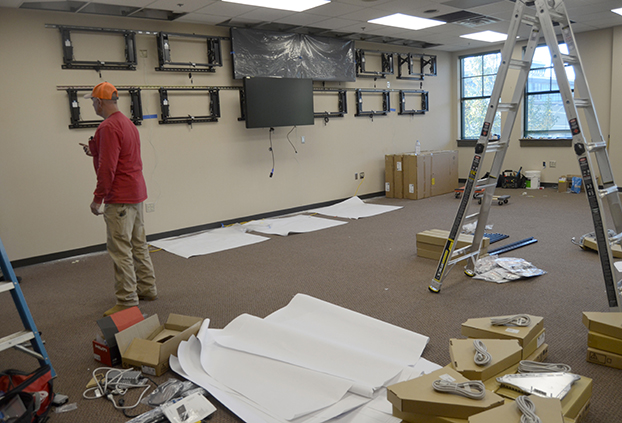 City crews began installing equipment and other cables into a room at the Salisbury Police Department that will house the Rowan Regional Crime Intelligence Center. The regional center will be a place to gather data on criminal activity and will be used as a tool for other law enforcement agencies. Shavonne Potts/Salisbury Post

SALISBURY — A month ago, five people were arrested in connection to a drive-by shooting at the corner of Institute and West Innes streets with the help of video footage that captured the entire scene.

This video footage is just one element of the Rowan Regional Crime Intelligence Center that is expected to be unveiled before the end of the year.

“It will be able to tie in our camera system where we’ve been in partnership with certain complexes, cameras on city buildings and at certain intersections and the United Way who has helped us,” said Sgt. P.J. Smith.

The center was made possible because of a $500,000 grant from the U.S. Department of Justice. The grant covers not only the equipment and operating costs but also any overtime used by other departments to include the Spencer, East Spencer police departments and the Rowan County Sheriff’s Office.

Rep. Tedd Budd, who helped in securing the grant, announced in September 2019 that the police department had received it. Budd wrote to the Department of Justice to say in the previous years Salisbury, East Spencer and Spencer had experienced an increase in homicides and aggravated assaults. He told the federal agency the increase in crime had negatively impacted the health of the towns and its police departments.

The center was created in what was once a backup 911 center at the Salisbury Police Department. It’s now being turned into a central data hub and resource for local law enforcement agencies and those throughout the region.

The work of the Salisbury Police Department’s two crime analysts are also a part of the intelligence center. The analysts look at crime trends and repeat offenders as well as develop hot spot areas of crime and help other neighboring departments.

“We’re using the intelligence that we have gathered to conduct more thorough investigations,” Smith said.

In essence, the center is one tool the agency can use to be more proactive in combating violent crime, he said.

The intelligence center is two years in the making, Smith said, and dates to the agency’s partnership with the Office of Justice Programs under the U.S. Department of Justice.

Before the establishment of Salisbury’s crime intelligence center, Smith, along with Detective Sgt. Travis Schulenberger, traveled to the Chicago Police Department to see how that agency used its own camera systems to solve and reduce violent crime.

Other officers traveled to Memphis and Alabama to see how other similar agencies run a similar center.

The Salisbury Police Department is currently working on its policy for the intelligence center.

Smith said in the October shooting incident, while officers were being deployed to the area, he was able to go back to the camera footage to obtain descriptions of the shooters and vehicles. The information was then sent to officers working that day and within about 20 minutes an officer spotted one of the vehicles on Mooresville Road.

“Because of the work between our detectives, the work of our camera system, our crime analytics getting information it ended up with five people in custody,” Smith said.

He said they are still looking for a sixth suspect.

All of the cameras are placed in common areas and not in areas where residents would expect privacy, Smith said.

The same camera set up led to the capture of accused shooting suspect Jeffery Wayne Hooker, who in May 2019, walked up to a car at the intersection of North Long Street and 11th Street and fired a gun. The gunshot struck Mya Miller, a young Salisbury mother. Detectives interviewed witnesses, found the route that the car she’d been a passenger in traveled and discovered they had camera footage. Police were able to get a description of Hooker’s vehicle and within three hours an officer who responded to another incident saw the vehicle.

Hooker was arrested the same day.