MT. ULLA — The sound of a shovel sinking into rocks rings out as Jessica Evans picks up a load of gravel and dumps it into a blue bucket.

Evans doesn’t measure. She doesn’t need to because she knows exactly when the bucket is full enough — about a few inches from the bottom. She walks across her driveway and into a green grass field, hops a portable low-shock electric fence and turns the bucket over into a slim silver trough.

Dozens of white turkeys flock over to the trough and begin to munch. At this point, feeding her turkeys gravel has become a part of her everyday routine, nothing out of the ordinary. It’s just another quirk of raising the eccentric birds.

“The hardest part about raising turkeys is learning turkeys and then adapting to them,” Evans said.

When Evans began raising turkeys, she had to learn a lot — what they eat, how to keep them healthy and how to get them ready to become the centerpiece of Thanksgiving dinners across the Charlotte region. 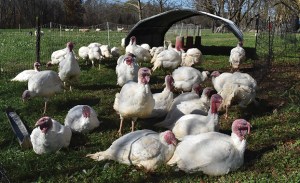 Evans Family Farm raised about 100 turkeys this year. From the time the farm received the turkeys in late July to the time they’re harvested in November, some will have gained over 20 pounds. Ben Stansell/Salisbury Post

From the time that Evans Family Farm receives the poults (the name for an infant turkey) in late July to the time that the full-grown turkeys are harvested in November, each bird will have processed about 25 pounds of grit, Evans said.

“One of their primary digestive organs is a gizzard,” Evans said. “A lot of people have heard of turkey gizzard or giblets that you use for gravy, but that gizzard is a big strong muscle that is their personal feed mill. They eat rocks, even big-sized gravel at this point because they’re so large. That goes into their gizzard, which has a big thick lining on it, along with the grain that they eat and it grinds everything up so that they can get all of the nutrients from that.”

The broad-breasted white turkeys raised on the farm use rocks to break down the non-GMO blend of wheat corn and soy millet that Evans gets from a local supplier. From time to time, Evans will spice up the turkey’s feed with cayenne pepper.

Turkeys lack strong taste buds. So, the pepper isn’t for flavor. It’s to protect them from illness, specifically blackhead disease, an ailment that’s common in chickens, pheasants and quail. Evans said that they’ll go through about 25 pounds of the red powder per year. 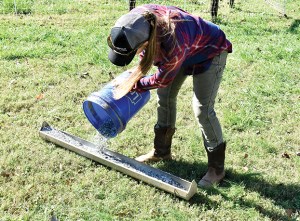 Jessica Evans has grown accustomed to dumping gravel in the turkeys’ feeding trough almost daily. As the turkeys grow, so do the bits of gravel that they consume. Ben Stansell/Salisbury Post

Adding cayenne to the turkey’s food is one of the tricks Evans has learned that helps keep her turkeys healthy. And keeping turkeys fit is more difficult than other livestock.

“Turkeys are more of a nuanced thing to raise, “Evans said. “Until you get them to a month or two months of age, they’re not real hardy. They’re really sensitive to temperature fluctuations and drought and moisture. It’s a little bit hard to get them to the hardened-off point.”

Keeping the turkeys warm during their first few months is critical. With the near triple-digit temperatures North Carolina receives in the late summer, that hasn’t really a problem for Evans. It’s more difficult, Evans said, to keep them warm when the sometimes unpredictable fall weather begins.

“We like to have turkeys outside where they like to be,” Evans said. “You get into this holiday season, you never know what the weather is going to be like so make sure you give them lots of shelter when the weather gets cold or when it gets too wet.”

In the three years that Evans Family Farm has raised the birds, they’ve improved their turkey-raising tactic. Even after adapting, Evans said that it’s inevitable that they’ll lose some turkeys along the way. The average mortality rate among farm raised turkeys, Evans said, is about 20%. Of the 100 or so birds that Evans Family Farm raised this year, most made it to harvest.

Despite the challenges of raising turkeys, Evans said that she enjoys being around the inquisitive animals.

“More so than a chicken who doesn’t want anything to do with you for the most part, turkeys are really curious,” Evans said. “They’re curious about people and they like to be around people. We’ll joke that they’ll talk back to you. It just makes them fun. They’re fun to be around.”

From the time the poults arrived at the farm in the summer until they were recently harvested, they packed on the pounds. The male turkeys Evans Family Farm sold this Thanksgiving season were around 26 pounds and many of the females were between 12-15 pounds. 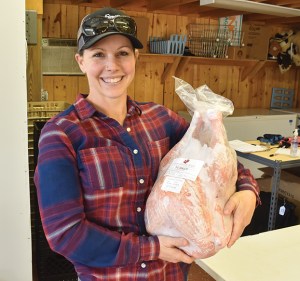 A turkey from Evans Family Farm is probably bigger than the grocery store variety, and is also said to boast a stronger flavor. Ben Stansell/Salisbury Post

Not only are the Evans Family Farm turkeys larger than most grocery store fowls, but Evans said they also tend to have more flavor.

“They’re not exactly gamey, but the flavor is a little stronger,” Evans said.

Evans said that the turkey’s have become a popular item on the farm’s online shop and at the farmer’s market. Many of the birds were already spoken for before they were processed.

Now that the Thanksgiving season has passed and Evans has sold all of her turkeys, she won’t have to worry about scooping gravel everyday for at least a few more months.

Catawba, Livingstone not bringing students back until after the…