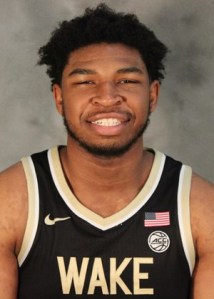 WINSTON-SALEM, N.C. (AP) — Tariq Ingraham and Jalen Johnson combined for 35 points in their Wake Forest debuts, helping Steve Forbes win his first game with the Demon Deacons, 111-51 over Delaware State on Wednesday.
Ingraham, a redshirt freshman who tore an ACL on the eve on last season’s opener when Danny Manning was the coach, scored 19 points on 7-for-7 shooting from the field and 5-for-5 shooting from the line. Johnson, a graduate transfer from Tennessee, added a career-high 16 with four 3-pointers and a team-high seven rebounds. Johnson originally committed to East Tennessee State before Wake Forest hired Forbes away from the Buccaneers.
Three other players scored in double figures: UNLV graduate transfer Jonah Antonio had 12, freshman Quadry Adams 11; Virginia Tech transfer Isaiah Wilkins 10.
Johnson started a game-breaking 28-0 run with a 3-pointer at the 6:39 mark of the first half that made the score 32-25. The Demon Deacons went 8 of 10 from the field, going 6 of 7 from 3-point range, while the Hornets missed six shots and had six turnovers.
The score at the break was 59-30.
Wake Forest shot 54.5% from the field and had a 49-26 rebounding advantage. The final margin was the largest in school history since beating Buffalo by 65 points on Jan. 5, 1983. The other seven wins by at least 60 points were all more than 100 years ago.
Pinky Wiley scored 11 points for Delaware State, which shot just 26% and had 25 turnovers.
_