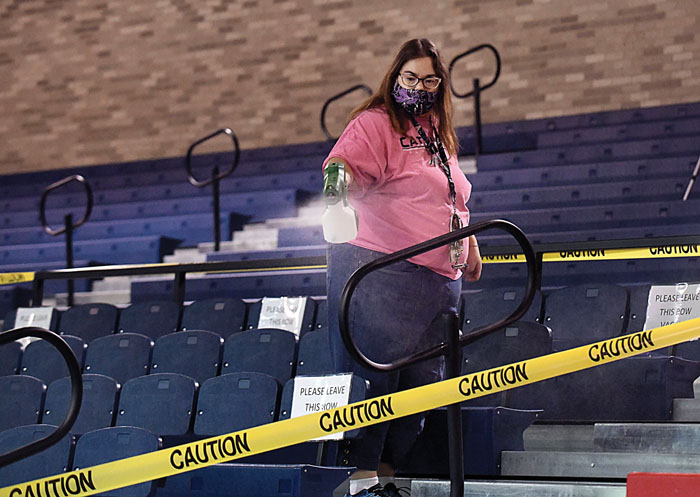 Catawba's sanitizing the seating in the gym between games. Photo by Wayne Hinshaw, for the Salisbury Post

A long, lanky, laid-back redhead, Joines is one of the more familiar faces on campus, a key behind-the-scenes guy as far as preparing the athletic facilities and in helping game day operations function smoothly.

In a season in which the basketball Indians figure to be competing against a raging virus first and against their opponents in the South Atlantic Conference second, Joines has become an even more important asset. Now he’s a front-line warrior in a struggle he couldn’t have dreamed of fighting a year ago. Who knew that COVID-19 would join Wingate, Lenoir-Rhyne and Carson-Newman on Catawba’s list of rivals?

Postponements have been slam-dunking actual games played during the early stages of a hobbling SAC season.

“Only three sets of games were played on Tuesday,” Joines said, shaking his head.

Normally, there would have been six SAC doubleheaders, plus one non-conference encounter for someone among the growing league’s 13 schools.

Catawba’s men were supposed to travel to Mars Hill on Tuesday night, but the Lions’ season was “paused” on Monday by a positive coronavirus test.

Catawba quickly replaced Mars Hill on the women’s schedule with Queens, but then Queens postponed a string of early games and won’t return to the court before mid-December.

It’s not just D-II that is fighting to have a season. Duke’s men have already dropped their opener to the virus. Connecticut’s women’s program has halted team activities.

At most places where they managed to play SAC games on Saturday and Tuesday, there were just 25 fans/parents, but the standards aren’t identical in every state. At Lincoln Memorial’s home game near the Tennessee/Kentucky border on Saturday, 500 fans were welcomed.

Catawba’s teams were able to win a doubleheader against Anderson on Saturday at Goodman Gym. The smiles, especially from the seniors, were a major part of the story. Ace Carter staged a SAC Player of the Week performance for the Catawba men. Marissa Bruce wasn’t SAC Player of the Week, but she offered the Performance of a Lifetime for the Catawba women.

The other segment of Saturday’s story was just being able to play the games. Joines and his helpers went above and beyond to make that happen.

Joines has more than hand sanitizers and soap and water at his disposal.

He has the benefit of cutting-edge technology as Catawba tries mightily to keep players, coaches, essential personnel such as the clock operators, public address announcer, media and a smattering of guests — parents, plus a few dignitaries and VIPs — safe.

Before anyone can play or coach or referee, they submit to a cutting-edge rapid test that can diagnose COVID-19 in 20 minutes.  There’s a small portable machine that can reliably detect the virus from just one swab of a nose or throat.

Joines’ most important weapon is the state-of-the-art electrostatic spray gun.

This tool sprays an electrostatically charged mist. The spray contains particles that aggressively adhere to surfaces and objects. Because the particles are positively charged, they cling to and coat any surface at which they are aimed. That’s the case even if the mist is only sprayed from one side. It’s controlled and efficient.

“I can spray the front of the chair you just sat in and the chemicals will wrap around,” Joines said. “Those chemicals kill every germ within 30 seconds. It takes a few minutes to dry, but then you’re good to go.”

Besides a meticulous cleansing of the gym and adhering to new protocols for everything from towels to water bottles, there’s the set-up.

“We were able to set up the bleachers on Friday,” Joines said. “You start there. We closed one side of the gym completely. Then we set up the bench areas. Normally, that’s just a row of chairs, but now we have to space them out to five rows, 23 chairs on each bench, with distances meeting the protocols we’ve been given. Then we set up the areas for the guests and the media. That includes a special section in the bleachers for the broadcast media that won’t be wearing masks.”

Joines’ next task was signage, communication and organization.

“The goal is to not to let anyone cross paths,” Joines said. “There are separate entrances to the gym designated for each team, and teams are supposed to go straight from their locker room to the gym. The referees are asked to come to the game already dressed.”

The refs also are employing new technology in the COVID age, with more on the way. Officials Saturday used a combination whistle-mask — the whistle is attached with a plastic clip .

The future of officiating may be pushing a hand-held electronic whistle rather than blowing one of the traditional ones and creating spittle. That technology is here.

“None of the refs Saturday had those new hand-held whistles,” Joines said. “But I’m looking forward to seeing them in operation.”

Everyone who came to Goodman Gym on Saturday filled out paperwork, circling yes or no to questions concerning any medical issues. There’s also a mask requirement and a temperature check. Those with temperature readings below 100.3 degrees Fahrenheit were deemed safe to enter and receive wrist bands.

Four game balls were switched out more frequently than in the past and systematically cleaned.

“If a ball were to go into the crowd or over the press area and get returned by someone, it’s thrown out until it can be cleaned,” Joines said. “They wouldn’t just start playing with it.”

In past years, the visiting men’s team, if it arrived early, as Anderson did on Saturday, would drift up into a corner of the bleachers and support their women’s team. That’s no longer an option. Now the men must hang out in their designated locker room until it’s time for them to warm up.

Women’s teams would also meander back into the gym following their own games and showers to do schoolwork or to cheer on the men’s team, but now they can’t return to the gym.

After Catawba’s women’s game on Saturday, fans vacated the gym through the back of the building, while the next tiny group of fans came in through the front entrance to support the Catawba men. Masked media members headed for a classroom to await the appearance of requested interview subjects.

Between games of the doubleheader Joines and his crew did their finest and swiftest work.

“They put 20 minutes on the clock and we were able to disinfect the scorer’s table, the press tables, the bench areas, the chairs and all the seating areas for fans, all in about 15 minutes,” Joines said. “I don’t know if they’ll be able to do that in every gym every time. I had a lot of help.”

Even if a gym can be disinfected in 15 minutes, there’s also a 25-minute warmup period after that. So if a women’s game ends on schedule at 4 p.m., the men’s game is probably going to start around 4:45 p.m. That’s if everything goes without a hitch.

Following the men’s game, players on the opposing teams acknowledged each other with waves and hand gestures as a display of sportsmanship, rather than the traditional hand shakes and slaps.

Then Joines and his two helpers gave the gym its fourth exhaustive cleansing in a 24-hour period.

They’d done their part to help Catawba to register its first victories of a season that is trying to find some traction in a whirlwind.

While the women’s game has been postponed, Wingate is scheduled to visit Goodman Gym on Saturday for a men’s game at 4:30 p.m.

Joines hopes he and his crew can do it all over again.