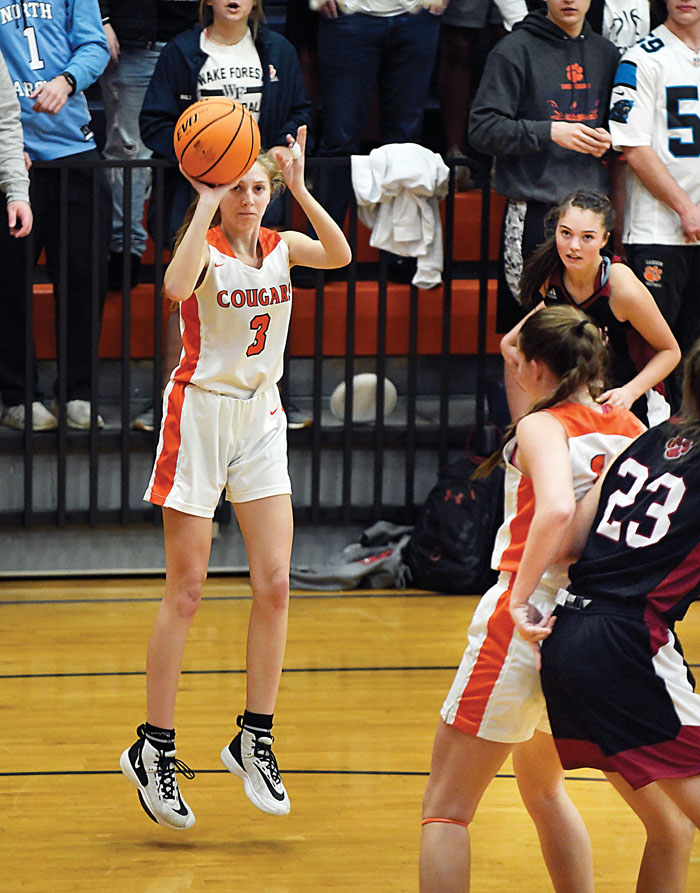 CHINA GROVE — Carson senior Colbie Perry slept better the last few nights than she has in a while.

It’s been a strange recruiting environment, with college programs facing daily disappointments and postponements, but Perry has found a home.  She has signed with Converse, not the famed American shoe company, but the college in Spartanburg, S.C.

“Recruiting has been different with everything shut down during the spring and summer and with my last high school basketball season starting so late,” Perry said. “My dad told me I needed to pick out the schools I was interested in and to send them an email. Then he helped me make a highlight film to send out.”

Colbie’s dad, Brian, makes better highlight films than the average dad. A former Catawba player, he’s been the head boys basketball coach at Carson since the school opened in 2006. His daughter’s highlight film starts with a 3-pointer from the volleyball line and goes from there. There’s the occasional drive and the occasional steal thrown into the mix, but mostly it’s a non-stop shower of 3-pointers. The 3-pointer has been her calling card for a long time. Sometimes she’s drained three in a minute and a half.

“She shoots with great range and she shoots with a quick release,” Carson head girls coach Brooke Stouder said. “She can shoot it. When she gets hot, our opponent is in trouble.”

In her career, Perry has scored 75 percent of her points from behind the 3-point line. She’s made 218 3s. She’s made three 3-pointers for every 2-pointer. She’s listed at 5-foot-8, but looks   taller. It’s a long-armed 5-8 that leads to lots of deflections and steals in Carson’s press.

When you can shoot like she can, it’s easy to get labeled as a one-trick pony, but she works hard on her defense, her ball-handling and her passing.

“It’s good to see that work being rewarded,” Stouder said.

Perry has helped Carson go 77-11 the last three seasons. A 100-win varsity career was almost a sure thing, but her senior season, if it can happen at all, will be a COVID-shortened one.

A 1,000-point career is still a goal, but it will be more challenging now. She has 872 career points. Without COVID, she probably would have cruised to 1,000 in the Christmas tournament at Catawba’s Goodman Gym, the place where her father played. That would have been the ideal place to reach the magical milestone, to hear the cheers and accept the hugs, but now there’s no Christmas tournament. The first games are scheduled for Jan. 7.

But that’s all in the uncertain future. In the here and now, Perry is feeling overwhelmed and gratified by the amount of response there was to her highlight film.

“A bunch of schools responded,” she said. “I was surprised by how many schools I heard from. There was a ton of interest from D-II schools and D-III schools. Converse was the first to respond. They responded immediately.”

As it turned out, Converse provided the perfect fit. When she visited the campus and stayed overnight, friendly coaches and players welcomed a potential offensive game-changer.

“They really wanted her,” Stouder said. “That’s so important — go where you’re wanted.”

The academic side of things probably was even more important. A student-first athlete, Perry wanted to major in Spanish, and Converse has an excellent program. Converse also offers American Sign Language as a minor. Perry is all-in for that as well.

“I want to be able to communicate with as many people as possible and help others,” Perry said.

Perry said the biggest downside of recruiting was having to break the news to other schools she’d decided on Converse.

“It was upsetting to have to tell Montreat, especially,” Perry said. “They were so nice to me.”

Looking back on her three seasons at Carson, Perry says her fondest memories aren’t big 3-pointers – or even playoff or Christmas tournament wins.

“It’s been the close friendships that we’ve formed over the years,” she said. “My teammates are my best friends.”

With the COVID-delayed season, Perry has had extra time to recover from an injury she suffered late in her junior season.

A girl fell on her hand in the second-round playoff game against Asheville. She broke two fingers on her left hand, her guide hand. There was a ring finger that was broken cleanly and healed naturally and a pinkie finger that was  mangled and required surgery. She had two screws and a plate inserted in the pinkie. She missed about six weeks of normal basketball activity.

“That pinkie is still kind of jacked up,” Perry said. “But I’m back to shooting normally.”

A normal Perry should be quite a long-range threat in January.

If the NCHSAA schools can get there.

“Right now, we’re working out three times a week, and we’re wearing masks,” Perry said. “We try to enjoy these workouts and just being around each other. We’re all hopeful, but we also know that any day could be the last day.”