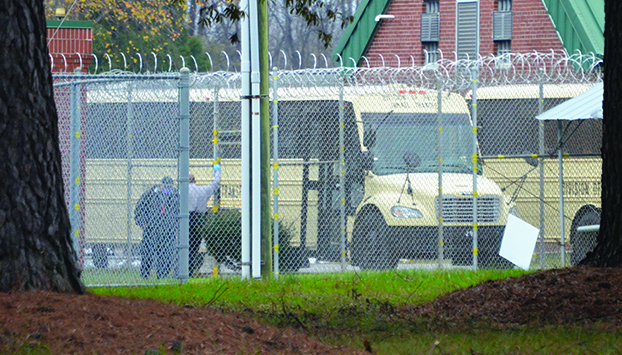 Inmates housed at Piedmont Correctional Institute’s minimum security prison were boarded onto buses this week and will be transferred to other minimum security facilities within the state Department of Corrections system. The staff from the site, located on South Main Street, will move over to the Camp Road site. Shavonne Potts/Salisbury Post

The suspension is one of multiple taking place across the state even as facilities like Piedmont Correctional are on “code red” status, meaning that inmate transfers shouldn’t occur. Other facilities named Wednesday include Randolph Correctional Center in Asheboro and Southern Correctional Institution’s minimum security unity in Troy.

A news release issued by the N.C. Department of Public Safety said inmates were transferred in cohorts to prevent mixing and placed in medical quarantine when arriving at their new location.

According to John Bull, a communications officer with the N.C. Department of Public Safety, prison officials transferred around 170 inmates on Tuesday and Wednesday from the minimum custody unit in Salisbury to other minimum custody prisons in the state. A Post reporter watched as prisoners were loaded onto tan inmate transfer buses Wednesday morning. Bull said the transfers occurred without major incident.

Bull said the reason for the temporary closure was due to the COVID-19 outbreaks in the inmate populations at the prison and the need for additional personnel at the medium security facility, which is 11 stories and colloquially known as the “high rise,” on Camp Road. Other prison consolidations may be necessary, a news release said.

“Consolidating some prison operations allows more offenders to be medically treated within the prison system, which reduces the stress on hospitals treating non-offender COVID-19 cases in their communities,” a news release stated. “Doing so also increases public safety by reducing the number of offenders who must be transported outside prisons for medical treatment.”

At Piedmont Correctional Institute, which has traditionally been a processing site for inmates to enter the state prison system, 3,292 tests have been conducted on 2,442 inmates, with 183 total positives. There are 60 active COVID-19 cases at the prison. The N.C. Department of Public Safety has reported no deaths at Piedmont Correctional from COVID-19 and has released no numbers of staff member deaths.

“I am grateful we have such a dedicated, hard-working staff who help out their colleagues as we continue to battle this first-in-a-century pandemic,” said Todd Ishee, commissioner of prisons. “They are heroes.”