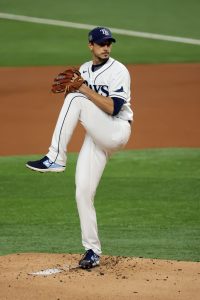 The 37-year-old right-hander is returning to the Braves after helping Tampa Bay reach the World Series this season.

The announcement comes after left-hander Drew Smyly signed an $11 million, one-year deal with the Braves on Nov. 16. Smyly, 31, became the first of the 181 free agents to switch teams.

He was drafted by Atlanta in 2002 and made his major league debut with the Braves in 2008 before he was traded to Pittsburgh in 2009.