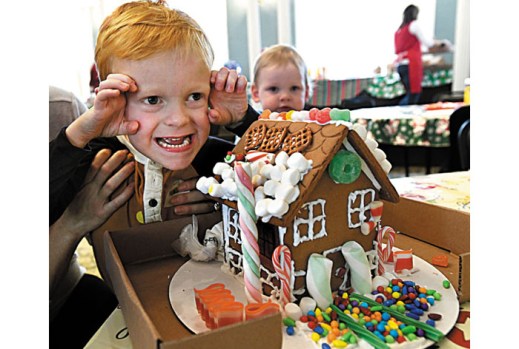 Jacob Story, 4, put on his "glasses and his best ugly face" to pose with his completed gingerbread house at the Rowan Museum's annual event last year before the pandemic and mask-wearing rules were in place.. photo by Wayne Hinshaw, for the Salisbury Post 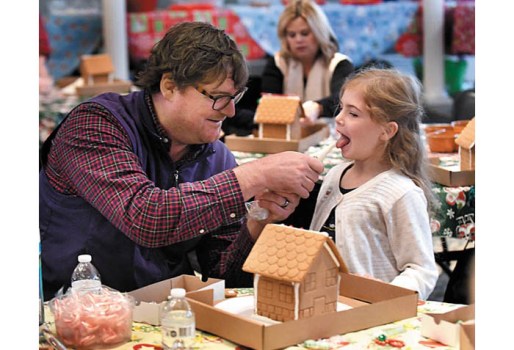 Erik Lipscomb gives daughter Sallie, 6, a taste of the icing while working on gingerbread houses at the Rowan Museum's annual event last year before the pandemic and mask-wearing rules were in place.. Photo by Wayne Hinshaw, for the Salisbury Post 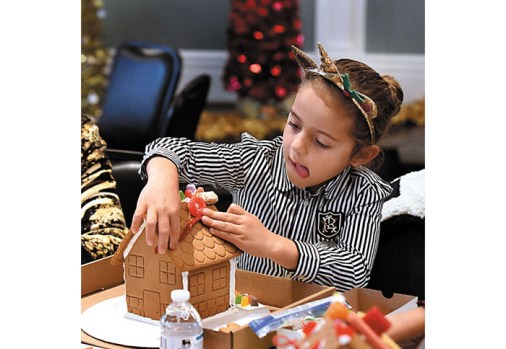 Sloan McIltrot, holding her tongue just right, works on gingerbread houses at the Rowan Museum's annual event last year before the pandemic and mask-wearing rules were in place.. Photo by Wayne Hinshaw, for the Salisbury Post 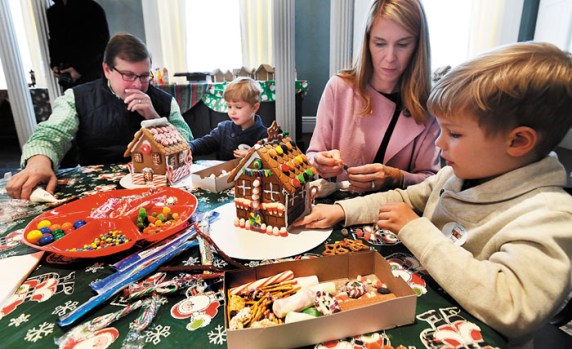 Left to right: Drew Davis, Graham, 3, Laura, and Reid, 5, work on gingerbread houses at the Rowan Museum's annual event last year before the pandemic and mask-wearing rules were in place.. Photo by Wayne Hinshaw, for the Salisbury Post 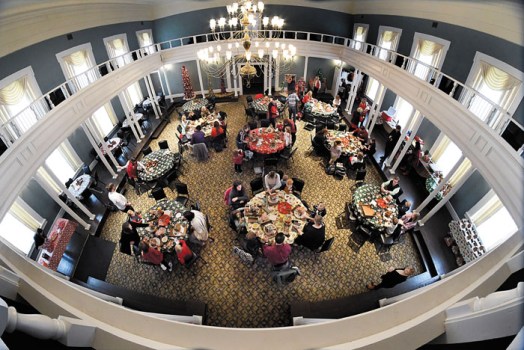 The gingerbread house workshop at the Rowan Museum's annual event in the Messenger Room last year before the pandemic and mask-wearing rules were in place. Photo by Wayne Hinshaw, for the Salisbury Post 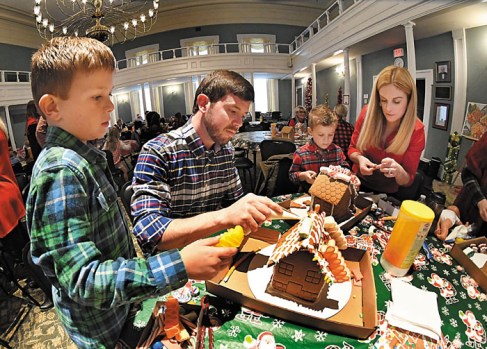 From left: Parker Currin, 8, Madison, Finley, 5, and Ashley working on gingerbread houses at the Rowan Museum's annual event last year before the pandemic and mask-wearing rules were in place. Photo by Wayne Hinshaw, for the Salisbury Post

The Lipscomb family has been building gingerbread houses at the Rowan Museum’s annual workshop for so many years, they should have a general contractor’s license.

“However long this has been going on, we’ve been doing it,” Erik Lipscomb said last year as he pitched in with wife Katie and daughters Eliza and Sallie in decorating another gingerbread creation.

“The excitement is real in our house, and the biggest challenge is getting it home safely.”

Because of the pandemic, Rowan Museum will be handling its gingerbread workshop quite differently this year. Instead of decorating on site at the museum, gingerbread house kits will be available for pickup, so families can do the decorating at home.

The kits have been going fast. Museum officials urge people to call 704-633-5946 as soon as possible to reserve their already assembled gingerbread house kit with icing and plenty of candy for $15.

In past years, the on-site workshop has become a popular holiday event.

Rowan Museum board member Alexsandra Abramowski headed the volunteers in 2019 who made the gingerbread house workshop happen over several shifts in the Messinger Room, the large upstairs meeting room at the museum, located at 202 N. Main St., Salisbury.

In years past, the event has always held on a Sunday in early December. The museum has had as many as 105 to 110 houses ready to go for decorating participants.

“This is my favorite event that we do, just to see how happy the kids are,” Abramowski said in 2019. “It’s a team effort.”

On this particular Sunday last year, 88 gingerbread houses went home with happy children. The museum staff and volunteers first build the houses from kits. The families report in at their assigned times, take the bare gingerbread houses to their tables and spend the next hour in full decoration mode.

“The beauty of doing a house here is we have put it together with icing,” retired Rowan Museum Executive Director Kaye Brown Hirst said.

And then there are the things — mostly candy, darn it — to decorate with.

To view and purchase photos from the gingerbread house event, click here.

The always creative participants also find ways to create thing such as fish ponds, snowmen, and scenes with sleighs and reindeer on the grounds outside their houses.

The museum supplies the tubes of royal icing. Among its many uses, the icing serves as glue for the decorations. Besides candy decorations, which the children tend to munch on, Rowan Museum also furnishes snacks of popcorn and goldfish, along with bottles of water for drinks.

A Santa Claus settles into a good place in the corner so children can visit with him while parents, grandparents, aunts, uncles and friends take their own pictures.

In between the new shifts of families coming in, the volunteers clean the tables and replenish the trays of candies and other decorating elements.

The event wisely provides containers of hand wipes on the tables.

As noted early, the Lipscombs are veterans of the gingerbread decorating wars and parents Erik and Katie knew going in the temptations for Eliza and Sallie.

“They’ll eat more candy at this than at Halloween,” Erik said.

“We hit Halloween,” Katie added, “and they start asking about this.”

Katie said she allows the girls to break off a big piece of their house right before it’s time to discard the rest of it at the end of the holiday season.

“I let them savor it one more moment,” she said.

The Currins — parents Ashley and Madison — again brought their children, Finley and Parker. Their houses always go on display in the breakfast nook, “and at the end of the holidays, we’re usually missing a few windows or shutters,” Ashley said, not naming any names.

The Currins said the houses, for which Rowan Museum furnishes cut-out cardboard boxes as their platforms, travel home pretty well, with care. “You have to make sure there is no slamming on brakes,” Ashley said.

Over the years, Madison has become a master decorator, and Ashley acknowledged the house he spends the most time on also receives the most comments back home.

Hirst, who makes icing and still plays a major role in the gingerbread house workshop, said the idea for the popular fund-raising event germinated one year among Rowan Museum board members who had young children.

While she doesn’t know the exact year, Hirst said it was before everyone was carrying smart phones with cameras. In the early days, she would take all the pictures of kids with Santa Claus, write down names and addresses and send developed photos later to the parents.

Now it’s just easier to set up Santa Claus in the corner and have parents take their own photos with their smart phones, Hirst said.

The museum organizers also figured out how best to buy gingerbread house kits in bulk.

You have to let the pieces of each house dry for about a day before construction, Hirst said. A group of volunteers meet at the museum for a building day and the houses are constructed using royal icing as the putty that holds all the joints together.

The museum’s royal icing is a delicious concoction made from powdered sugar, egg whites and cream of tartar. Each house is given a cylinder of icing to squeeze out as needed for the decorations they attach to their houses. Some people also like to use the icing itself for snowy scenes.

All the decorative items available are much more than parents would have at home.

“You wouldn’t do that on your own because it would cost a small fortune,” Hirst said.

Margaret Whaley, 5, attended her third gingerbread workshop in 2019. For brother Banks, 3, it was his first.

“As you can tell, he’s just loving it,” mother Lauren Whaley said of Banks. Margaret’s best friend, Annie Williams, also was working away at their table.

“We love it,” Melissa McIltrot said. “They have so many different things here — things you don’t think of to put on a gingerbread house.”

McIltrot was with her son, Miller, and her 6-year-old daughter, Sloan. It was Sloan’s third time, too.

“It’s a great tradition with the kids,” Diane Simmerson said for her granddaughter twins, Kate and Rachel Wood, who come every year with their mother, Lisa Simmerson.

Kate, 11, pointed out the candy she had fashioned as her house’s security cameras.

Rachel had to stay home last year because of a cold. Back home, Kate’s gingerbread house probably would be their dining room centerpiece, resting on a decorative cake plate.

Hirst said the building of gingerbread house translates well to team-building challenges for companies. One year, F&M Bank made it an exercise for employees attending a retreat.

Besides building a house, the teams had to figure out a loan on it. And the end products — some had attached gingerbread garages — were judged.

“It was fun to watch the adults try to do it,” Hirst said. “It was neat. I’ve always wondered if they ever saved those houses.”

Hirst has known some workshop families to keep their gingerbread houses from each year and create their own village at Christmas. The houses will last, she said, if they are enclosed in Saran Wrap and stored in cool, dry places. Otherwise, they will succumb to heat and humidity.

“It’s just fun,” Hirst said. “We really haven’t changed it a lot. It just worked. Gingerbread houses, candy and kids — what could go wrong with that?”

This story originally was written for the holiday issue of Salisbury the Magazine, before the museum decided to go with take-home gingerbread house kits this year.