‘Having your doctor at home’: Local optometrist goes above and beyond for patients 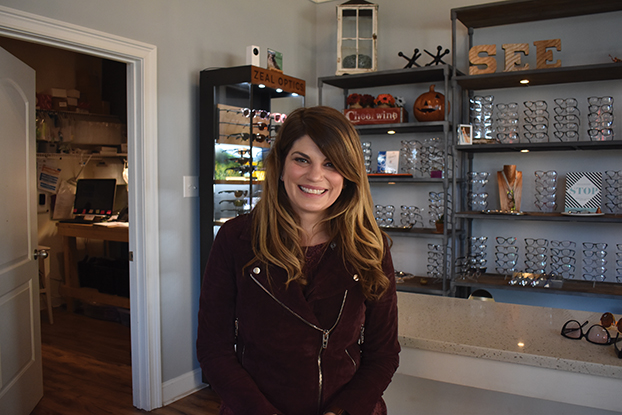 Optometrist Melanie Denton Dombrowski recently received two honors, one from the N.C. Optometric Soceity for her clinical record and the other from Vision Monday magazine for going "above and beyond" for her patients. Ben Stansell/Salisbury Post

When Dombrowski opened Salisbury Eyecare and Eyewear five years ago, she wanted to be different.

“I definitely want to be the cool eye doctor,” Dombrowski said.

Unlike some optometrists’ offices, Dombrowski’s practice feels personal and relaxed. Her office on East Council Street is a clinical center, but in some ways is more similar in style to a trendy boutique.

While Dombrowski has distinguished herself through the way she’s set up her office and with her presence on YouTube and social media, she’s also separated herself from her peers by winning the John D. Robinson award for clinical excellence. The award, given by the N.C. Optometric Society, is bestowed to an optometrist who “has exemplified excellence in the clinical practice of primary eye care and ophthalmic medicine.”

Dombrowski received the award on a Zoom call that took the place of the N.C. Optometric Society’s fall banquet earlier this month.

On that same Zoom call was her great-uncle, Olee Olsen, also an optometrist. He received the award as well. Neither knew that they were receiving the award, only that the other family member was.

“It was a surprise and pleasant surprise,” said Olsen, who retired in 2005 and now lives in the Boone area. “I was honored. There have only been 25 recipients of the award in the last 20 years and when there are over 1,300 optometrists in the state of North Carolina, that’s a pretty select group.”

For Dombrowski, being honored with the same award at the same time as her great-uncle was a special moment. After all, Olsen is responsible for Dombrowski becoming an optometrist in North Carolina in the first place.

Even though she grew up as a “farm kid” in a rural town in Michigan, Dombrowski always had ambitions to work in the medical field. While attending the University of Michigan, she worked as an EMT and helped out in the emergency room, hoping to find her lane in medicine. That’s when her dad gave her some advice.

“At some point in college, my dad told me to reach out to my great-uncle and I did,” Dombrowski said. “That’s really what prompted me to come to this state, because he had practiced here his whole career and it was really neat to get to know him. He kind of convinced me to go into optometry.”

Olsen, who maintained a practice in the Charlotte region for decades before retiring, was a major influence for Dombrowski. 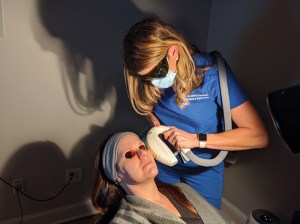 After graduating from the University of Michigan, Dombrowki attended the Michigan College of Optometry and then completed several externships, including a stint at Duke University. She then practiced in Salisbury for a few years before moving to Asheville. A little over a half decade ago, she returned to Rowan County to open her own practice.

“I have always really liked this community because I felt like they accepted me as their own pretty quickly,” Dombrowski said.

Although the number of women entering the eye care field is growing, Dombrowski is still somewhat of an outlier. When she opened her office downtown, she didn’t want to change that — she leaned into it instead. Being a female isn’t the only way Dombrowski is different from many of her contemporaries. She also has a strong presence on Facebook and is becoming well-known for her ever-growing library of YouTube videos.

On Oct. 20, 2017, Dombrowski uploaded a video on a new YouTube page and it showed a dachshund wearing a bowtie and trying on various glasses at Salisbury Eyecare and Eyewear. It was only 15 seconds and it was the first video posted to the page.

Since then, Dombrowski has posted over 160 videos to the channel. The clips, which range in duration from 30 seconds to 15 minutes, cover a variety of topics, from which transition lenses are the best to Dombrowski testing out bullet proof lenses by shooting them.

Most of the videos, however, feature Dombrowski explaining an eye condition or providing helpful tips for everyday eyecare. 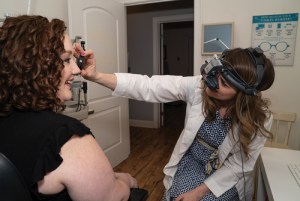 Dr. Dombrowski says, ‘The clinical excellence award is honestly the biggest, biggest honor and I think that’s been my whole career in the making.’ Submitted photo

“It got started as being something for patients I thought, wouldn’t it be cool if I told my patients about these complicated things, if I’m telling you about dry eyes, which you’ve never heard before, but I can direct you to a video of me explaining it,” Dombrowski said. “What’s cooler than having your doctor at home with you?”

At first the Youtube channel didn’t have a large following.

“It felt like we put all this work in for the past two years and the video didn’t get anywhere,” Dombrowski said.

But a breakthrough came during the COVID-19 pandemic, when telehealth became a necessity and people flocked to the internet for medical advice.

“We recently, during COVID, figured out how to work with that algorithm,” Dombrowski said. “Finally, they’re gaining traction.” 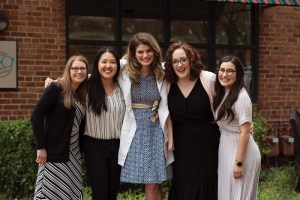 Dr. Dombrowkski with teammates from her office. Submitted photo

Now, several of Dombrowski’s videos have received tens of thousands of views and have been shared widely on social media. Along with reaching a local audience, including many of her patients, Dombrowski has gained an international following.

“I’m reaching people in India and across the country,” Dombrowski said. “I had a patient reach out and say, ‘Can you see me? I’m in New York.’ I can’t because I don’t have a New York license, but it’s really cool to see the impact.”

Dombrowksi’s YouTube channel was part of the reason why she was named as one of Vision Monday magazine’s “Most Influential Women in Optical” in the “above and beyond” category.

While Dombrowski said she was thrilled and humbled to receive the honor, the most meaningful award was the one she shared with Olsen.

“The clinical excellence award is honestly the biggest, biggest honor and I think that’s been my whole career in the making,” Dombrowski said. “It’s a big one to me because it means my peers in the state who I look up to so much respect what I do in the clinic and I think there’s nothing better than that.”

Olsen said that it’s exciting to see Dombrowki continue to flourish in her field. He can still remember when she reached out to him in college and they first discussed optometry.

“It’s exciting when you plant a seed and they not only get up but they run with it,” Olsen said. “… She’s a bright, bright young lady and I’m very proud.”