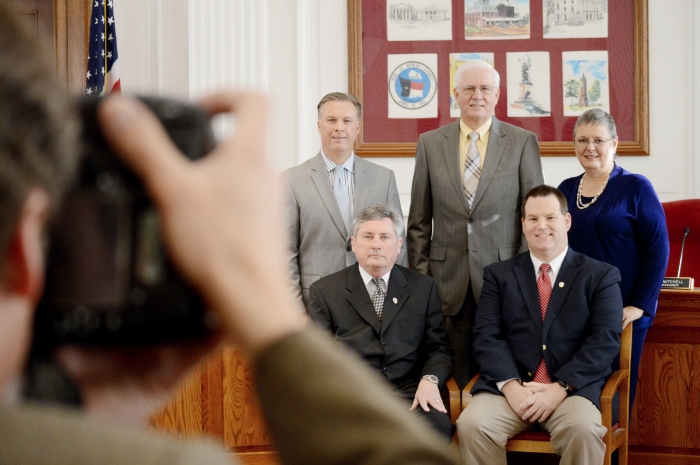 Josh Bergeron / Salisbury Post - Commissioners pose for a picture in 2014.

Naturally, Craig Pierce’s and Mike Caskey’s re-election didn’t get much attention after the primary because they saw no Democratic competition. Their victories, however, secured a rare milestone for the current group of county commissioners as well as for local Republicans.

Pierce and Caskey as well as Greg Edds, Jim Greene and Judy Klusman are on track to serve at least eight years as a group. Pierce and Caskey won their first terms in 2012, and the trio of newer commissioners came into office two years later.

Barring a resignation or other unexpected departure from office, those eight years are unusual because county commissioner elections tend to produce new officeholders while other folks decide that one term is enough. So, even during the tenures of relatively recent, long-serving commissioners like Eugene McCombs, Hall Steele, Jamima DeMarcus, J. Newton Cohen Sr. and Chad Mitchell there was turnover elsewhere on the board.

In present-day Rowan County government, it has been a relatively stable several years with few internal controversies aside from a rocky first couple years. The commissioners prayer lawsuit, for example, was unpopular among a swath of local residents until its final resolution in late 2018, but the county voted unanimously and repeatedly to pursue it and there were no major outcries of opposition from those on the board.

Talk to commissioners and you’ll hear something similar from each of them.

It’s sort of like making friends. After a period of time working together, commissioners figure out what the others are interested in.

“You start to understand what the other commissioners’ interests are and where we like to focus,” Caskey said.

Edds used a sports analogy to evaluate commissioners’ working relationship, saying teams are usually better if they are together for a longer period of time.

“As a team, we’re really operating in a good spot,” he said.

Chalk it up to being in office at the right time if you like, but the team of commissioners can also claim credit for creating the base of a strong economic development engine. That engine got up to speed shortly after the county was able to recruit Rod Crider to town to lead the Rowan Economic Development Commission. Between business expansions and new facilities like Chewy.com’s fulfillment warehouse, it’s been a good time for those in the business of making economic development announcements.

Pierce is among those who say commissioners have played less of a role than others in the county in bringing new business and industry to town. Pierce said commissioners aren’t “the pied piper” while still adding that “we’ve turned the county in the right direction.” Projects like Interstate 85’s widening was a boon for economic development that officials past and present had a hand in.

External factors like land prices and availability in other counties also play into whether developers look to Rowan or elsewhere.

Edds has a specific idea about why voters have kept the current group in office for going on eight years.

“We have been reelected several times because, in general voters like the team,” he said. “Turnover starts happening when there’s no success. The community thinks we’re heading in the right direction and that there’s a direction laid out, a plan for making this better.”

The 2020 election, however, could be the beginning of the end for the current continuity. In a year or so, Edds, Greene and Klusman will have to make a decision about whether to seek a third term or seek another office. Midterm elections also feature the widest slate of local races and one or more commissioners could choose to seek another office.

Throughout his time on the Rowan County Board of Commissioners, there’s been open speculation about whether Edds might run for the legislature, Congress or some higher office. But Edds says he’s not yet sure what he’ll do in 2022. He’s a grandpa now, and he’s settling into the next stage of life. (He’s picked the grandparent name of G-Dad.)

Caskey says he’s contemplating his options in 2022, and he’s finished first in every county commissioners race he’s run in.

Pierce, meanwhile, is wondering whether he might be the “old guy” on the board after the 2022 elections.

Whatever comes next, commissioners’ chief goal must be seizing on the trust they’ve built with one another and continuing to work for the people who put them in office. Commissioners have the wind at their backs and can make more meaningful and significant progress to improve life for all Rowan Countians in the next two years than they have to date.