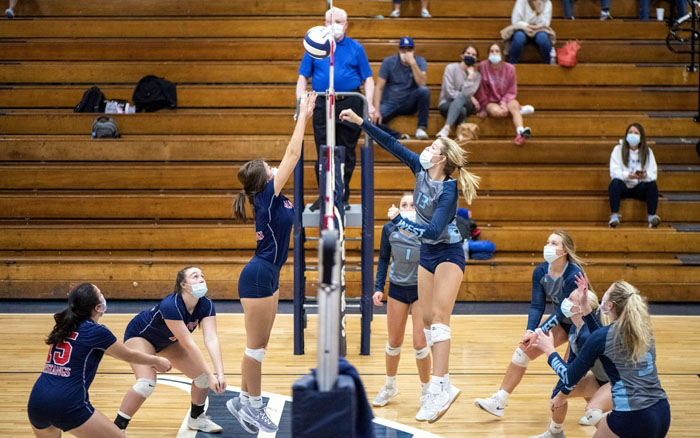 West Rowan’s Emma Clarke (13) sends the ball over the net in the victory over East Rowan in the first match of the season. JON C. LAKEY/FOR THE SALISBURY POST

MOUNT ULLA — West Rowan had the best team in school history in 2019-20 and now tries to reload.

Missing are Carly Stiller, who usually manned the middle;  Emma Gusler, a right-side hitter who had some big matches, and Tori Hester, a three-time county player of the year who was among the best players in county history. West was 81-25 during Hester’s four seasons, peaking with last season’s 28-match winning streak and a run to the regional final. Sweeping North Iredell, South Iredell and Carson is no easy feat, but the Falcons accomplished that in 2019.

Seven of the 10 playoff wins in school history have come in the last three seasons.

Hester was one of a kind, but the cupboard is far from bare. Eight players who had major roles in last season’s championships are still in uniform. Some promising newcomers have joined them.

There are two sets of returning sisters — Noe and Emma Gaeta and Allison and Ashlee Ennis.

The program has come along way in a short time. In 2014, West was ranked 401st in the state by MaxPreps after a 3-17 season. West was ranked fourth (all classifications) after last season.

The graduation losses were at the net, so the key to 2020 success will be the tall replacements such as Love and Clarke.

Love is more athletic after strenuous offseason workouts, while Clarke is a terrific athlete. She might have been West’s best player on opening night with seven kills and three blocks.

The sure thing as far as kills will be left-hander KK Dowling, who is an all-round player in the mold of Hester. She’s an exceptional hitter, defender and server and should be one of the county’s player of the year candidates.

Hitters are only as good as their setters, and the Falcons are in excellent shape in that area. Allison Ennis set last season as the Falcons started 17-0. When she went down with a foot injury, Noe Gaeta stepped in and the Falcons didn’t miss a beat, even in some intense playoff games. With both setters healthy, West has some options. They can split time or they can play together in a two-setter attack.

West also has several good people back for digs and serve-receive. Kennerly, the libero, had a special freshman season.

It will be interesting to see if West takes a step back or stays among the state’s elite teams. The NPC will be as good as ever, so there won’t be many easy nights.