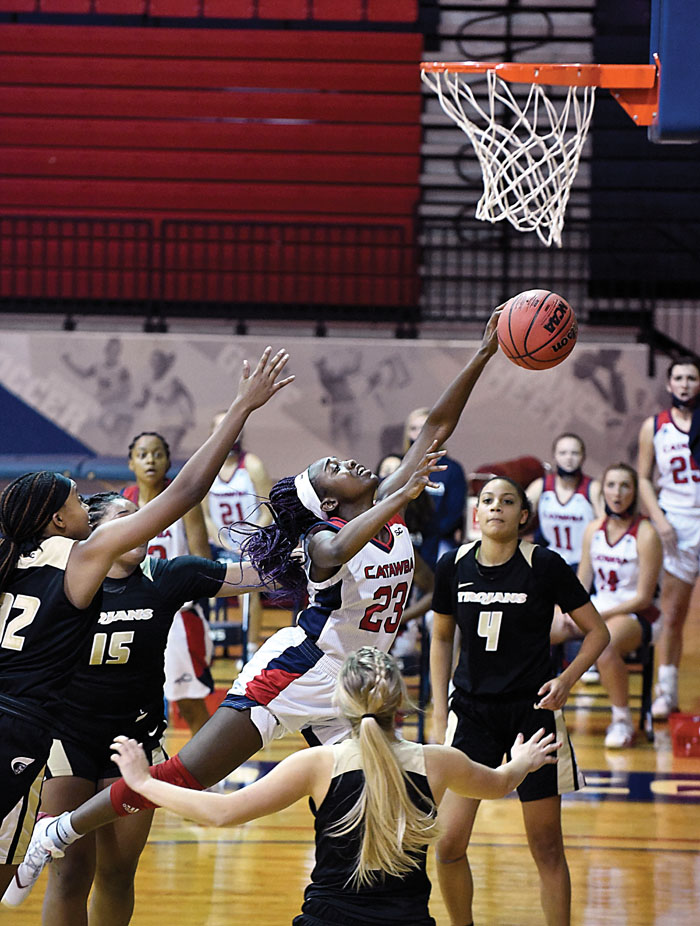 Catawba's Marissa Bruce 23 led the way for the Indians on Saturday. Photo by Wayne Hinshaw, for the Salisbury Post

SALISBURY — Catawba senior Marissa Bruce turned in a mind-blowing first half on Saturday afternoon in a 77-63 South Atlantic Conference victory over Anderson at socially distanced and nearly vacant Goodman Gym.

Bruce bounded off the bench, shot 7-f0r-8 from the field, swished three 3-pointers and poured in 19 points in the 10 most magical minutes of her career.

“I’m not shocked at all,” Catawba head coach Terence McCutcheon said. “We know Marissa’s work ethic and we know how much energy she has. She’s a great driver and she can get layups up off the glass from different angles. Her ability to drive sets up the rest of her game.”

Bruce scored 31 points all last season. She averaged 1.1 points per game. These are obviously strange times.

Bruce is regarded as an excellent defender. If she was on the Anderson scouting report, at all, it said something along the lines of “No. 23 will get after it defensively.” Nothing was on there that said, “No. 23 can light it up.”

“They were playing off me,” Bruce said. “They gave me some opportunities. The shots were going in.”

You could say that again.

Bruce threw a life preserver to ice-cold Catawba in the first half. She enabled her teammates to stagger to the locker room with a two-point lead and regroup. The Indians’ starters took it from there. Catawba blistered the visitors in the third quarter and seized control.

With 4:10 left in the first quarter, Bruce dented the stat sheet for the first time with a block. Her first bucket came on an offensive rebound. Bruce takes a jump shot on free throws and she swished two of those for an 11-9 lead with 2:11 left in the quarter. Then she nailed her first 3-pointer for 14-9.

In the second quarter, Bruce went off. She scored a dozen points.

Catawba players not named Marissa shot 4-for-26 on field goals in the first half, but it didn’t matter. The Indians held a 36-34 lead.

“I wasn’t that surprised by the slow start,” McCutcheon said. “With the long layoff, with the COVID, we didn’t have our legs and we didn’t have any rhythm offensively. We were off, but I knew that at some point the shots were going to start going in.”

Catawba basically won the game in the first two minutes of the second half. A steal and layup by Lyrik Thorne right out of the gate ignited her teammates. Talia Barnes, who provided a dependable post presence in the second half, scored inside. Taisha DeShazo and Lauren Ford made 3-pointers. When human buzz-saw Shemya Stanback got to the rim for a layup, the Indians had tallied on five straight possessions, with five different players scoring, and led 48-38.

“At the start of the second half, we slowed down some in the halfcourt and we were able to get more control,” said Stanback, who had 10 points and four assists.

After a drought for both teams, Janiya Downs made a 3-pointer for a 13-point lead. Then Bruce made two free throws for a 53-38 edge.

Bruce drove and dished to Barnes for a 55-39 lead moments later. Barnes finished with 10 points and nine rebounds.

It still wasn’t quite over. Anderson slid behind by as many as 17, but when Ashley Berry made a 3-pointer with 5:24 remaining, Catawba’s lead had dwindled to 67-58.

The thin crowd was getting antsy, but Thorne scored on a drive. Then Stanback made a jumper at the 3:17 mark when the shot clock was about to expire.

“You do what you need to do,” Stanback said. “I didn’t panic. I’ve got confidence in my jump shot.”

That was a backbreaker, and when Stanback found DeShazo, who drilled a straight-on 3-pointer with 2:29 left, it was all over.

Anderson’s Taylor Hair, a 6-footer who can shoot from way out, scored 23 for the Trojans on 9-for-16 shooting.

Former Carson High star McKenzie Gadson, playing close to home, was aggressive and drew fouls with smooth drives. She experienced a cold shooting day from the floor, but she got 10 of her 12 points on free throws. She added three assists, three rebounds and two blocks.

Still, the bottom line was a strong win for Catawba.

“Anderson is always at or near the top of the pile in our league,” McCutcheon said. “They lost very good players, but they are still a team that we knew was going to come in here and fight us. It’s an important win to open with. We’ve got a great group of ladies, and I think we’ll be one of the better teams.”

For seniors such as Stanback and Bruce, just getting to play the game on a sanitized island in a sea of COVID uncertainty, was a thrill.

“It felt great to be out there,” Stanback said. “We were all looking forward to it.”