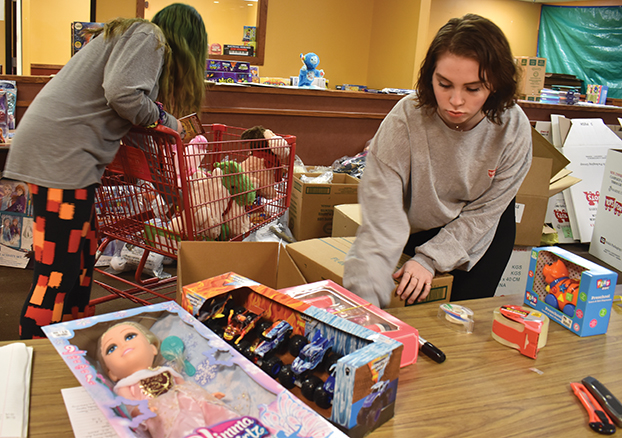 Harley Earnhardt and Madison E. Nicolosi work to package a box of toys that will go to a family that might not otherwise have Christmas presents. Ben Stansell/Salisbury Post

SALISBURY — When cars line up near the law office of Wallace and Graham to go through the ‘Tis the Season Spectacular drive-thru parade on Wednesday, they’ll pass by several white cardboard containers.

Aidan Melton will be standing nearby, anxiously waiting for the receptacles to fill with toys.

For six years, Melton has gathered action figures, bicycles and everything in between to donate to Rowan County’s Toys for Tots Foundation. Started in 1947 by a Marine Corps reservist, Toys for Tots collects and distributes toys to children whose families may not have the means to buy them presents for Christmas.

The Toys for Tots program was brought to Rowan County well over a decade ago by Raul “Arbe” Arbelaez. Six years ago, Arbelaez was introduced to Aidan, who quickly became Toys for Tots’ most valuable volunteer, collecting hundreds of toys every holiday season.

This year, COVID-19 has impacted Aidan’s ability to visit local businesses to garner their support. In lieu of his typical fundraising tactics, Aidan came up with the idea to establish a contact-free gift drop off location at the beginning of Salisbury’s biggest Christmas parade.

“I think that was the most amazing idea,” Arbelaez said. “I’m not one much for being speechless, but he left me quiet for a few minutes. That was a brilliant idea.”

Toys for Tots will continue to collect toys at its cardboard boxes located as businesses throughout the county, but Arbelaez said the parade collection will be critical to the program’s ability to provide toys for all of the families who have requested them.

Arbelaez said that he is nervous about raising enough toys every year, but with more kids in need this Christmas than usual, he’s especially anxious.

“We’ve already had close to 75 families who have collected their toys early,” Arbelaez said. “We’re hoping to collect between 2,000 and 3,000 toys this year.”

When Aidan’s grandmother set up her spare bedroom, she expected it to be a place where guests could stay.

The only visitors currently resting in the room are made of plastic.

Aidan, 11, has been collecting toys to donate to Salisbury’s Marine Toys for Tots Foundation since he was five.

“He started seeing commercials for Toys for Tots and how children did not have Christmas and it devastated him to think that that was a possibility,” Tara said.

The first year he participated, Aidan recruited Catawba College students to help him organize a toy drive and began collecting Nerf guns, Legos and dolls. After collecting the toys, Aidan would only deliver them to a Marine.

“He would only give the toys to a Marine Corps because when he was five, he thought that the Marine Corps protected Santa Claus,” Tara said. “Nobody else could have the toys. We had to find a Marine.”

Aidan was in luck. Raul “Arbe” Arbelaez, who served in the Marine Corps, has been the local Toys for Tots coordinator since he brought the program to Rowan County. In the six years since Aidan started volunteering with Toys for Tots, he’s aimed to collect about 1,000 toys by himself. The process starts as soon as Christmas ends, Tara said.

“He is truly a giver. He always wants to one-up himself. He’s always thinking of ways to collect more toys next year,” Tara said. “… When Christmas is over and he’s like ‘What can we do for Toys for Tots?’”

Aidan’s love of Toys for Tots has made him invaluable to Arbelaez, who found his own passion for the program decades ago. 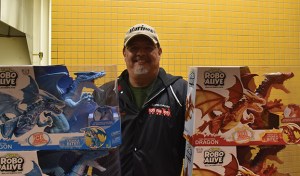 Raul “Arbe” Arbelaez has been leading the Rowan Toys for Tots organization for over a decade, but his love for the program began when he was in the Marine Corps in the 1980s. Ben Stansell/Salisbury Post

Arbelaez started volunteering with Toys for Tots when he was in the Marines not because he wanted to, but because he had to.

“It started back in 1986 as a punishment because I messed up in the Marine Corps,” Arbelaez said. “They punished me by making me do Toys for Tots.”

What was intended to be a penalty turned into a passion.

“I literally enjoyed every aspect of it,” Arbelaez said.

Arbelaez was such a fervent supporter of Toys for Tots that the Corps allowed him to return to North Carolina for the months leading up to Christmas each year so that he could run the program. No matter where he was stationed in the world, Arbelaez knew that in the late fall, he’d be flying back home to run Toys for Tots.

Along with his job at the Veterans Affairs Medical Center, Arbelaez spends most of the year accumulating toys. The process begins to accelerate in the months leading up to Christmas, which is when Arbelaez and his core circle of volunteers begin to collect, sort and distribute the toys.

Although Arbelaez said that he thinks about retiring from the position every year, he continues to enjoy every aspect of the job.

Now, Arbelaez jokes, he’s waiting for Aidan to grow up so that he can take over Toys for Tots.

“He’s a go-getter kid,” Arbelaez said. “He’s been a blessing to Toys for Tots in Rowan County.”

Toys for Tots asks for unused, unwrapped toys of all varieties. Right now, Arbelaez said, they are in need of toys for toddlers. To donate or apply for toys, visit salisbury-nc.toysfortots.org.

Aidan and Arbelaez will be collecting toys in the parking lot of Wallace and Graham during the ‘Tis the Season Spectacular parade, which begins at 5 p.m on Wednesday. After that, Toys for Tots will hold a multi-day donation event at Krispy Kreme on the weekend of Dec. 4,5,6.

Downtown businesses interested in participating in Toys for Tots can reach out to Latoya Price with Downtown Salisbury Inc. for more information.